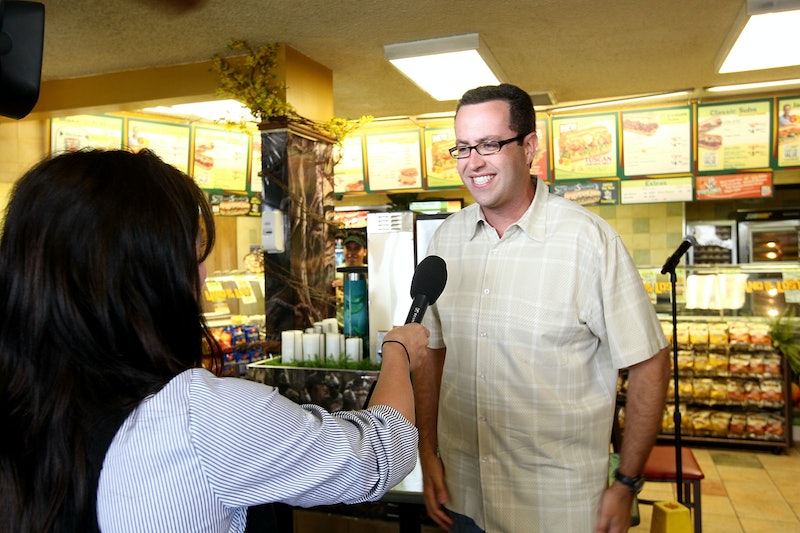 On Wednesday, the U.S. Attorney's office released court documents outlining "Subway Jared" Fogle's disturbing case regarding child pornography and at least one sex act with a minor. Details of the case have trickled out slowly this summer, each more horrifying than the last. In July, Fogle's home was raided as part of a child pornography investigation involving Russell Taylor, the former executive director of the Jared Foundation, Fogel's nonprofit. In the spring, Fogle expressed "shock" about child pornography charges levied against Taylor, and said in a statement through Subway that he expected no charges to be brought against himself. (Subway has now cut all ties with Fogle.)

Fogle was wrong. During the raid, FBI officials took a number of electronic devices from his home, and later brought charges against him. On Tuesday, FOX 59 reported that Fogle would be pleading guilty to possession of child pornography, and on Wednesday morning, the full extent of the complaint was released by the U.S. Attorney's office. The charges against Fogle were more grave than expected: Not only is he expected to plead guilty to both owning and sharing child pornography, but he's also planning to plead guilty to having sex with a minor, and traveling to do so.

Believe it or not, the complaint documents reveal a case even more disturbing that previously thought.

Fogle Is Only Pleading Guilty To Two Counts, But That's Not The Full Story

Although Fogle is only pleading guilty to two specific counts — one of traveling to engage in a sex act with a minor, the other of possessing and distributing child pornography — the details of the complaint tell more. He is paying restitution to more victims, he's required to register as a sex offender, he will undergo treatment for a sex disorder, and he will spend at least five years behind bars. In fact, the U.S. Attorney's office is pressing for him to spend at least 12 and a half years in prison.

Part of Fogle's plea deal involves paying $100,000 in restitution to 14 people who are or were minors. Restitution is essentially a kind of compensation, implying that Fogle bears at least some responsibility for what happened to them.

He's Plead Guilty To Traveling To Have Sex With A Minor

Fogle is pleading guilty to traveling between New York and Indiana to engage in sex acts with minors between 2010 and 2013, which is one of the more surprising of the documents' revelations. Prior to Wednesday, it was believed that Fogle was charged with child pornography offenses alone. Fogle has a wife and two children, who were once featured prominently in his Subway commercials.

He Allegedly Also Paid For Sex

According to TMZ, which published the court documents on its website, not only did Fogle explicitly travel to engage in sex with at least one underage girl, but he also paid to do so.

He's Pleading Guilty Not Just Of Possessing Child Pornography, But Also Of Sharing It

The documents note that Taylor, the former Jared Foundation executive director, had sent Fogle photographs and videos of young children, and that Fogle had shared images of child pornography with others. (Taylor, currently facing myriad charges of his own, has tried to kill himself in jail, but failed.)

He Allegedly Said "The Younger The Girl, The Better"

The documents state that Fogle had stated "the younger the girl, the better" in a text message to one of the 14 minors about what kind of girl he was looking for. TMZ also reports that he asked some of the 14 minors to send him pictures of themselves.

You can read the full documentation outlining Fogle's charges here.

More like this
Yinka Bokinni Recalls Terrifying Truth At Heart Of 'How To Hire A Hitman'
By Frances Stewart
For These Abortion Clinic Volunteers, Going TikTok Viral Is A Risk Worth Taking
By Audra Heinrichs
Every Single Big & Small Way You Can Fight For Abortion Rights
By Tess Garcia
Why You're Seeing Green Bandanas At Abortion Rights Protests
By Lexi Inks
Get Even More From Bustle — Sign Up For The Newsletter