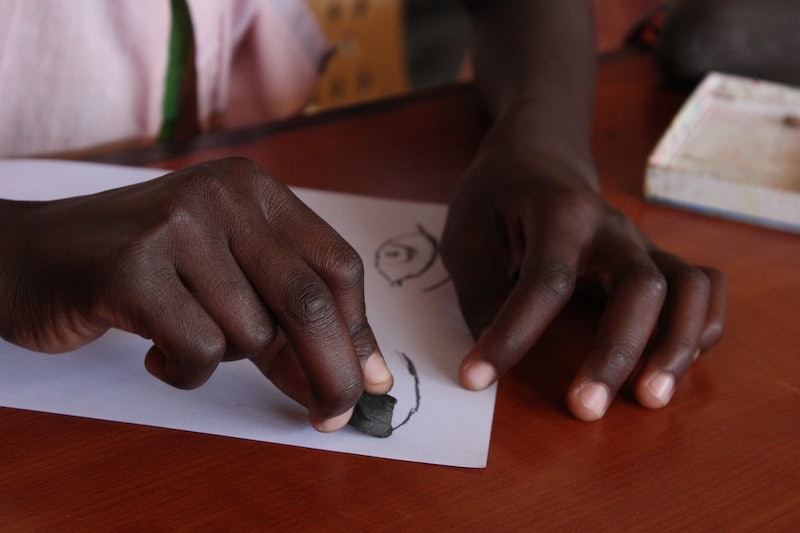 I think we can all agree that using the word "nude" to refer to one very specific light beige color is deeply problematic, right? It's a weird bit of linguistic exclusion that has, for some reason, persisted, even though it's very, very clear that not everyone has that specific skin color. But while we still have a lot of work ahead of us with regards to the issue, at least we've got this new victory to celebrate: The Nude Awakening campaign successfully convinced the Merriam-Webster Dictionary to revise its definition of "nude" to be inclusive of people of color.

While it's true that we've been making strides on the whole "nude is the color of white people" thing for a while – Crayola changed its "flesh" crayon to "peach" in the '60s, for instance – Merriam-Webster's definition of "nude" included "having the color of a white person's skin" until just a few days ago. Luis Torres, a sophomore at Ithaca College, was rightly annoyed by this fact; as such, he launched the "Nude Awakening" campaign at DoSomething.org on July 14 (which, by the way, is also National Nude Day), intended to change it. Wrote Torres in a blog post:

Merriam-Webster is the one of the most-used dictionaries in the United States and the only dictionary to include this archaic definition. DoSomething.org and its members decided that reference materials shouldn’t hold Eurocentric biases, that everyone should have the chance to be represented in the nude! After all, research shows that deconstructing the beauty standard of white skin reduces colorism and racism, benefitting the confidence and overall well being of people of color.

(Notice, in the GIF above, that Misty Copeland's nude-colored ballet shoes are brown, because that's what "nude" is in this case.)

To accomplish their goal, Torres encouraged DoSomething.org members last month to speak out about the Merriam-Webster definition on social media and on the comment section below the "nude" definition. Over 800 people did exactly that, and Merriam-Webster responded with an updated definition. Merriam-Webster’s Director of Marketing, Meghan Lunghi, wrote to Torres in an email:

Our principal aim in our dictionaries is to provide definitions that are accurate and clear. In addition, we are attentive to comments from the public about our definitions, and recent comments concerning one of the definitions of “nude” led us to review current evidence of the word’s use in the fashion industry.

That evidence showed that the existing treatment was in fact inappropriately narrow, so we recast the definition with language that accurately reflects the word’s broader meaning while also indicating more clearly the contexts in which this sense occurs.

The new definition pertaining to the color is simply "having a color (as pale beige or tan) that matches the wearer's skin tones":

And for the curious, you can see the old version here, using the Wayback Machine:

But while the new definition is a start, there's still plenty more work to be done. If "nude" is a color that matches the wearer's skin tone, for example, then why is it so hard to find nude shoes or underwear in an inclusive range of shades? Companies like Nubian Skin are trying to address this issue – but what we really need is for the inclusive definition to become the norm across not only the fashion industry, but across all industries. Let's hope that day comes soon – and in the meantime, let's make sure we're doing everything we can to get there.