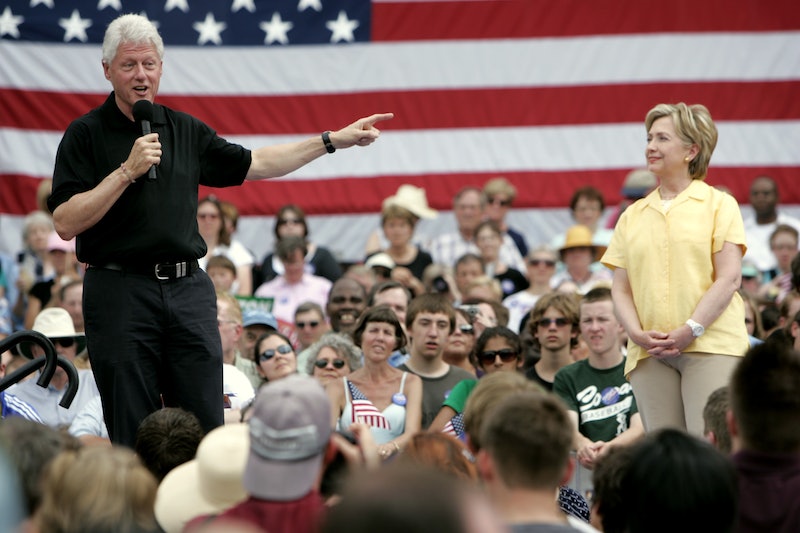 Videos of Hillary Clinton's closed-door meeting with Black Lives Matter activists were released by GOOD Magazine on Monday, revealing exactly what the presidential hopeful and the racial equality group talked about. The Clinton campaign set up the discussion after the potential protesters were kept out of a campaign forum on substance abuse in New Hampshire on August 11. During the conversation, Julius Jones, founder of Black Lives Matter Worcester, asked Clinton about her family's role in promoting "white supremacist violence against communities of color," alluding to one of Bill Clinton's initiatives.

Bill Clinton's huge 1994 crime law increased prison funding, as well as prison sentences, and the activists didn't let Hillary Clinton off the hook just because her husband was the one who enacted it. She fully supported the legislation at the time, and even lobbied members of Congress to pass it. According to a transcript given to CNN by the Clinton campaign, she responded to the activists' questions by saying: "I do think that there was a different set of concerns back in the '80s and the early '90s. And now I believe that we have to look at the world as it is today and try and figure out what will work now. And that's what I'm trying to figure out and that's what I intend to do as president."

Clinton said she was "not sure" she agreed that the policies were racist, but did concede that they weren't exactly successful. She said: "I do think that a lot of what was tried, and how it was implemented, has not produced the kinds of outcomes that any of us would want. But I also believe that there are systemic issues of race and justice that go deeper than any particular law."

Signed into law in 1994, the Violent Crime Control and Law Enforcement Act is the largest crime bill in U.S. history.

What It Did: The act provided $9.7 billion in prison funding, $6.1 billion for prevention programs, and 100,000 new police officers. The law also instituted mandatory minimums, expanded the death penalty to cover 60 more offenses, and created the three-strike policy, which requires life imprisonment without the possibility of parole for offenders with three or more convictions for violent felonies or drug trafficking crimes.

What Hillary Clinton Said: In 1994, Hillary said in support of the law: "We will finally be able to say, loudly and clearly, that for repeat, violent, criminal offenders: three strikes and you're out. We are tired of putting you back in through the revolving door."

How Successful It Was: The massive increase in America's prison population began before Bill Clinton took office, but the crime bill didn't help. While he was in office, the number of prisoners sentenced to more than a year in jail increased 46 percent, and the black prison population went up 50 percent. The violent crime rate, which peaked just before Clinton took office, did gradually decrease, and was almost 50 percent lower in 2011 than it was in 1992.

In an interview with CNN in May, Bill Clinton admitted that the law played a role in the country's over-incarceration problem. He said: "The problem is the way it was written and implemented is we cast too wide a net and we had too many people in prison. And we wound up ... putting so many people in prison that there wasn't enough money left to educate them, train them for new jobs, and increase the chances when they came out so they could live productive lives."