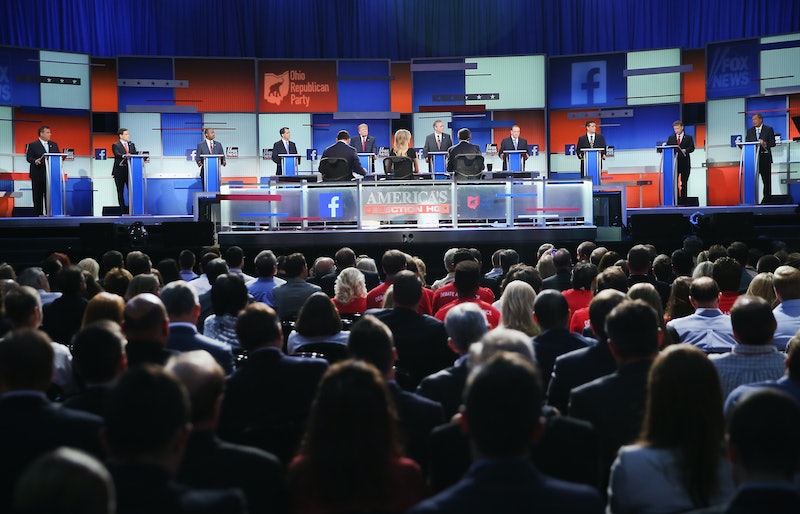 If you've ever seen any of their videos, you know the brilliance of Bad Lip Reading. From the Game of Thrones Medieval Land Fun-Time World to the NFL to (my personal favorite) the Mitt Romney soundbite, the hilarious takes on what people look like they're saying is always funnier — and often more accurate — than what they're actually saying. And the newest addition to the lineup is nearly flawless. In fact, the Bad Lip Reading of the GOP debate has possibly booted the "More Mitt" video — which I probably watched with my roommate more than 50 times in 2012, giggling harder and harder each time — to second place in my list of faves. We'll see if I break a new record with this one.

The video gives all of the 10 Republican presidential candidates who were in the first GOP debate some screen time, providing hilarity for all involved. Mike Huckabee and Bret Baier discuss a woman named Mindy pooping on a treadmill. Donald Trump talks about his pigeon, Lucas Don Velour, whom he takes shopping with him. Ted Cruz says he'll drink a sorority's goldfish. And to cap it all off, the video ends with candidates singing a closing statement. Let's just say that Ben Carson turned out to be the big winner there.

It's a five-minute video, and it deserves every second of your devoted time. Here's a sneak peek at some of my favorite parts.

Baier asks Huckabee how his summer was. "It was dope."

Chris Christie is telling Megyn Kelly about his favorite snack, when Rand Paul interrupts to say, "You just froze a baby." Christie denies it, and Paul yells "GENITAL WARTS! You touched a genital wart!"

Trump talks about his pigeon for a while, until his stomach begins to rumble dangerously. "Whatever. Look, it's a thing the tuna melt does to me."

Poor Carson, who didn't get much speaking time in either the actual debate or the parody version, is mumbling to himself. "Now this piece, I think it goes like that. And then this one ... No, this piece goes over here. It's part of the tree." When Baier interrupts him to ask what he's working on, Carson screams and says, "Um, see, um, a puzzle." And then comes the most truthful part of the video when he admits, "I don't know how to do this, actually."

And in one of the closing song statements, Scott Walker is so pleased with his lyrics, which included "Yeah hoo-de-doo" and "Why are dormant wives adorable?" that he ends by saying, "Yeah, this beat's got me so baller now."

Watch the masterpiece in full: