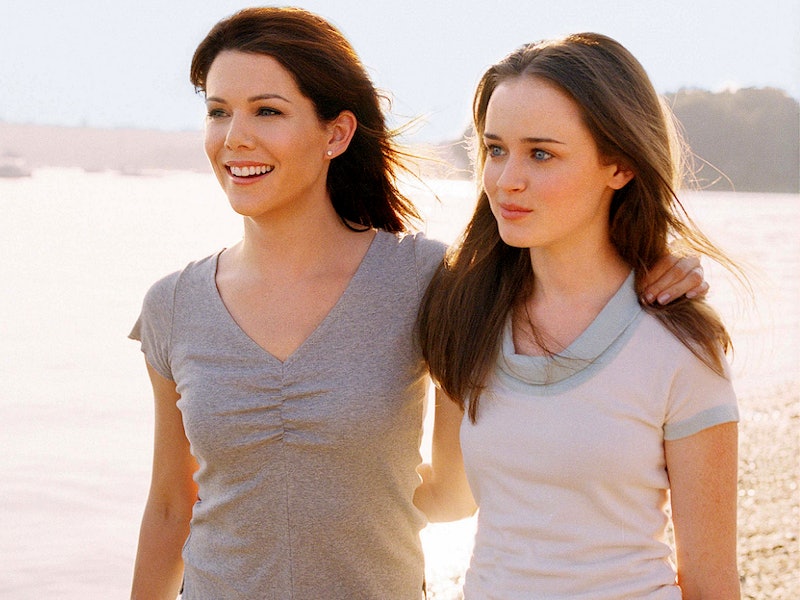 I can easily say that being best friends with my mom is the biggest blessing in my life. She's the person I have the most fun with, the first one I call after a bad day, and the friend who gives me the best advice (because she's had years of life experience that my other close friends don't). A running joke in my family is that when a was a little kid, I followed my mom all over the house, talking non-stop — and not much changed over the next 20 years. We currently live 3,000 miles apart, but we still talk every day, and I've been known to FaceTime her from the dressing room of a store when I just can't decide between two dresses for an important event.

Still, even the best friendships have their rough patches. In fact, after thinking about my own experience and those of friends who are also best friends with their moms, I realized that adult daughters and mothers who happen to be super close seem to fight more often than mothers and daughters who have a more hands-off relationship. And it's not really that surprising — those of us who are BFFs with our moms are totally open with them, so they know more details about our lives and decisions than the mothers of daughters who aren't quite so comfortable telling all. Plus, since we value their opinions a whole lot, we tend to get emotional and hurt more easily during an argument.

If you are best friends with your mom, no matter how much you adore her, it's inevitable that you two are going to have a few serious arguments during your adult life. They're painful and tough to get through, but they'll always end in reconciliation, and sometimes an even deeper bond. Here are six tips for getting through the conflict:

1. Take The Time You Need To Cool Off, Then Talk It Through

Having a huge fight with your mom feels terrible, so you'll both probably be eager to move past it and get back to the way things were before as soon as possible. Even so, it's important to not ignore whatever it was that you fought about, and instead have a level-headed discussion about it. In order for this to go well, it's best to wait until you've both cooled down enough to stay calm and hear each other out without interrupting, shouting, or otherwise making things worse.

When you're used to chatting with your mom every day, going a week without talking seems like an eternity. It might make you feel as though nothing is right in your world (and she probably feels the same way). But if you're angry and hurt, you're not in the best place to calmly talk through the disagreement. Although the time between the fight and the resolution is always painful, it's a better option than unnecessarily re-enacting your original argument because you tried to re-visit the issue while your emotions were still raw.

2. Distract Yourself And Don't Dwell On The Fight

While you're taking the time to cool off before you talk it through, try to get out and distract yourself. If you're feeling really down, it's tempting to stay in and not do much of anything. In my experience, that only makes things worse. When I've fought with my mother, dwelling left me re-playing the argument on a loop in my head and getting sad and worked-up all over again. Try to distract yourself with the same coping mechanisms you would use after a bad day or week at work — go for a run, hang out with a friend or take a fun day trip. It'll get your mind off the fight and you'll probably calm down more quickly and be able to talk things through with your mom sooner rather than later.

3. Remember That She Has The Right To Play The 'Mom Card'

If you're best friends with your mom, chances are she's generally pretty laid-back and understanding when you mess up. She doesn't sweat the small stuff, so you guys don't have a whole lot of conflict. But she's still your parent and, as hard as it is to hear, she does have the right to play the "mom card" when she's seriously concerned about a choice you're making.

Our mothers' maternal instincts don't disappear the second we turn 21, or when we get our first adult job and apartment. If your mom is seriously concerned that you're in an unhealthy relationship, you're partying too hard, or you're engaging in any ongoing behavior that could be dangerous for you, it really is her right to tell you that. You may totally disagree with what she's saying or maintain that she doesn't understand all the details of your situation — and, as an adult, that's your right. But it's fair for your mom to express her concerns.

4. Both Of You Probably Said Things You Didn't Mean

It's likely that you and your mom walked away from the fight with equally hurt feelings. As you think back on the argument, the words that stung you the most are probably the ones you're focusing on. But it's important to remember that everyone says things that they don't mean in the heat of the moment, and it's hard to articulate every thought and feeling when tensions are running high.

You and your mom each had an overarching point that you were attempting to make during your argument, but try not to get hung up on all the exact words and phrasing. You probably didn't mean every single word you said, and the same goes for your mom — our parents are human, too. I've also found it's important to remember that when you're arguing, your mom is talking about one particular choice or situation — but she's not judging you as a person. If she refers to a certain decision you made as "irresponsible," that's definitely hurtful, but she's not saying you are an irresponsible person who makes countless bad decisions.

5. The Occasional Argument Is A Sign Of A Healthy Relationship

There's no getting around it: arguing with your mom is miserable, uncomfortable, and really tough. But in any close relationship, the occasional argument is not only unavoidable — it's healthy. No matter how close you are with someone, you're going to have times when you seriously disagree with one another. If you both just choose to sweep those feelings under the rug and ignore them, it's a sign that you're not comfortable enough in the relationship to be honest with each other and that you don't trust that you'll bounce back from the conflict and the hurt feelings.

And in the long run, it's way better to deal with one argument than it is to sit with unspoken thoughts and feelings. Not being honest with each other will cause way more long-term damage to your friendship and mother-daughter relationship than one fight ever could.

6. You're Always Going To Move Past It

When you're fighting and dealing with the aftermath of an argument, it's overwhelming and painful for both you and your mom. But just remember that your relationship is strong and there's nothing you can't get past. You've gotten through bad fights before, and this time will be no different. You both need your time to cool off and hear each other out — and you'll often need to find a way of agreeing to disagree. Sometimes it'll take a little while for everything to go back to normal, but there's no way one fight is going to do permanent damage to your relationship. In fact, it may even make it stronger, because you'll appreciate each other even more after you've spent a few miserable days or weeks not speaking.

Both your lives would be pretty empty if you didn't have each other as best friends. If the only downside to being so close is having the occasional intense argument, well, that's a pretty small price to pay for such an amazing and special mother-daughter relationship.