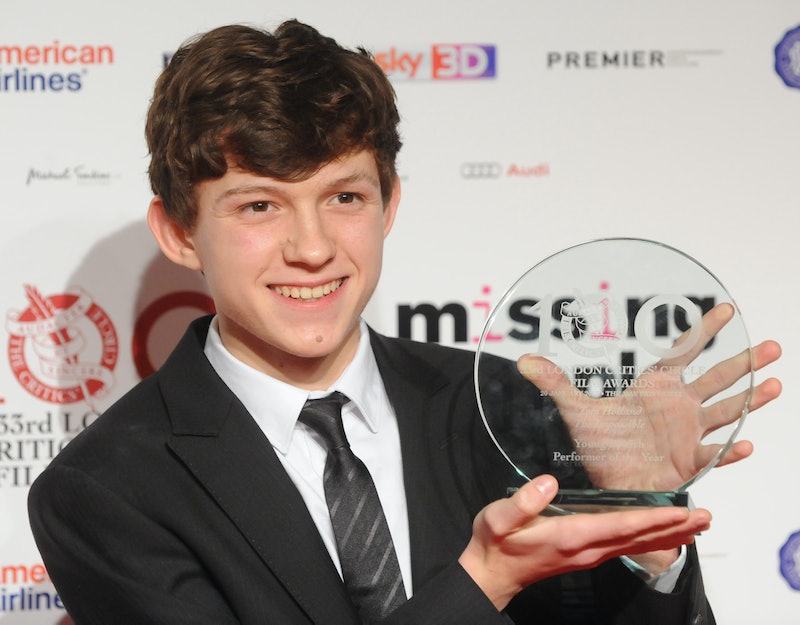 We all remember where we were when relative unknown Tom Holland became Marvel's Spider-Man in the reboot films that are coming in the wake of a deal between Marvel and Sony that resulted in shared rights and the dismissal of Andrew Garfield. (Which, to be fair, I wasn't that upset about, because watching an Amazing Spider-Man movie without Emma Stone as Gwen Stacy was going to be impossible for me.) While the casting had a lot of people going, "Who?," MCU fans have since accepted Holland among the brood until he has a chance to prove his skills with his upcoming film appearance. Now, we can share in the joy that the Spider-Man movies aren't the only place we can see the 19-year-old actor. In fact, Holland will star in Lost City of Z alongside big names like Charlie Hunnam, Sienna Miller, and Robert Pattinson.

Of course, his role as Spider-Man can't be credited for the fact that he is joining this all-star cast. Holland's name has been in the mix of movie cast lists with the likes of Ewan McGregor, Tom Hardy, Ruth Wilson, and Naomi Watts. His entire resume to this point, short though it may be, has basically been films with big-time actors whose positions of notoriety he was practically destined to join one day. However, considering the career revivals, or career explosions, that actors who have starred in Marvel movies so far have gone through (lookin' at you, Robert Downey Jr., Chris Hemsworth, Mark Ruffalo, Chris Pratt, and Chris Evans), there can be no doubt that Lost City of Z is just the first of what is sure to be a mountain of projects banging down Holland's door for a chance to snag the actor for a role.

According to The Hollywood Reporter, Lost City of Z is "based on David Grann’s New York Times bestseller of the same name" and "follows explorer Percy Fawcett who disappeared on an expedition in the 1920s to find a mythical city in the Amazon jungles he believed he saw in a previous trek." Holland joins the film team one day into production, and, although the name and role of his character has yet to be released, I can already feel confident about the fact that he's going to do a good job. Having Marvel cast you as the lead role in your own superhero movie even when your casting led the phrase "Who Is Tom Holland" to trend on Twitter for half of the day just wouldn't happen if you weren't a phenomenal actor. Heck, Holland's filmography to this point wouldn't have happened if he wasn't a phenomenal actor.

The way things are going, it seems like the Spider-Man casting is the only time that anyone will ever find themselves asking who Holland is, because he is on the cusp of blowing up into a huge star. Everyone had better join his fan club from now, before they get left in the dust.