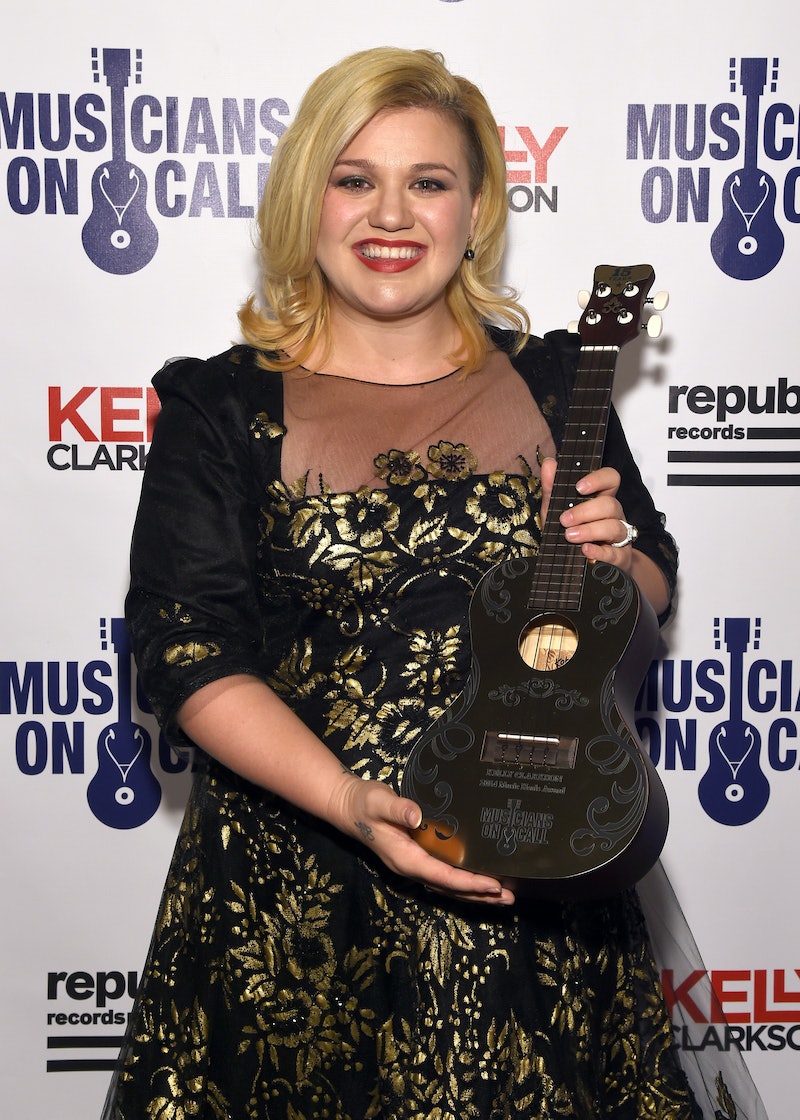 It may have only been a year since her first daughter, River Rose, was born, but it's official: Kelly Clarkson is pregnant with her second baby! She announced the news in the most precious way possible at her concert at the Staples Center on Wednesday night in a completely candid, unplanned moment. Not even her husband, Brandon Blackstock, knew she was going to let this particular cat out of the bag that night, but it felt like the right time to her, and the results were adorable. It's obvious she's super excited to welcome her new little one, but when is that happening? Unfortunately, there's no official word on when Clarkson is due with her second child, but that doesn't mean we can't try to guess when it'll be.

The only details Clarkson included in her pregnancy announcement were that she's "totally pregnant" and hasn't vomited yet — totally different from her first pregnancy, which sounded like it was pretty rough on her and her body. According to Baby Center, morning sickness starts around week six of pregnancy, but I doubt she would have said anything that early, even if she was too excited to hold it in, and especially if she hadn't already shared the news with her loved ones. Plus, morning sickness isn't a given in every pregnancy. If she's lucky, she could go nine months without it, and after what she went through with River, she deserves it!

But speaking of her loved ones, she almost definitely told them before she made her onstage announcement. Although plenty of women decide to tell friends and family about their pregnancy earlier or later, it's recommended to wait until you're 12 weeks in, at the end of your first trimester, when the risk of an early miscarriage goes down. Assuming Clarkson decided to go that route, it's probably safe to assume that River Rose's little sister or brother will be making his or her entrance sometime in early 2016, maybe sometime between late January — early March.

And if you ask me, that's an awesome time to be born. It's far enough away from gift giving holidays, and nowhere near big sis River's June birthday. Nice work, Clarkson and Blackstock!

No matter when Clarkson's new baby arrives, though, I'm so excited for her. She seems over the moon at the idea of becoming a mom for the second time, and let's just be real: There are few things in this world better than celebrity babies.

More like this
Zawe Ashton & Tom Hiddleston Are Pregnant With Their First Child
By Bustle UK
Tanya Burr Is Expecting A Baby With Her Mystery Partner
By Maxine Harrison
Who Is Betty Who Dating? The Australian Singer Is Married To Her Tour Photographer
By Radhika Menon
Cardi B’s New Single “Hot Shit” Features Kanye
By Alyssa Lapid
Get Even More From Bustle — Sign Up For The Newsletter