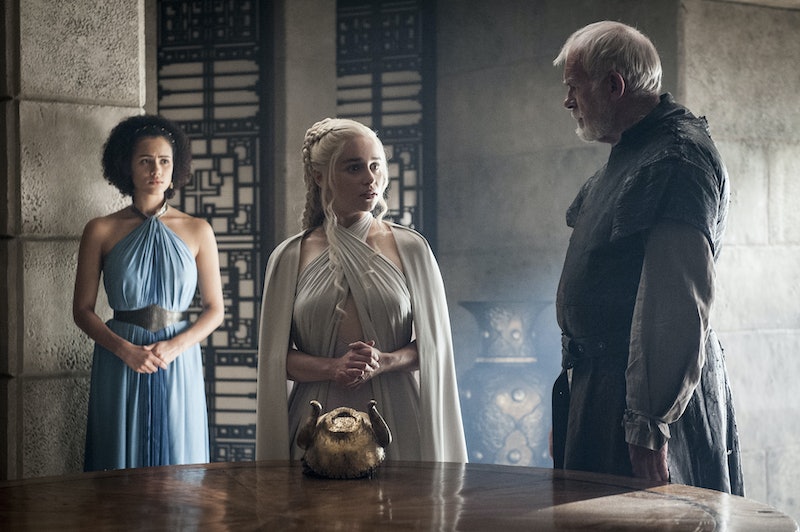 It takes a great deal of time and dedication to bring a show as expansive as Game Of Thrones together. The series is shot on three different continents in six different countries. Despite its vast cast and sets, the show still looks cohesive, and feels very much like the Seven Kingdoms in George R.R. Martin's A Song of Ice and Fire book series. Though special effects are added to help bring the mid-evil fantasy to the next level, it's really the costumes that help bring the characters and the world of Westeros to life. So, it's about time we give those costumes their due with some Game of Thrones costume facts you probably didn't know about.

It's no wonder that Game of Thrones head costume designer Michele Clapton, and her amazing team, continue to be nominated for, and take home, Emmys for their extraordinary work. Between the glorious fabrics, metals, furs, and leathers, I would love to spend a day in the costume closet for Game of Thrones. Since the series is based off of George R.R. Martin's fictional universe, I'm certain that a lot of research and time must go into planning every detail of each character's costume. Because clothing is such an intricate part of Game of Thrones, let's look at some obscure costuming facts, shall we?

1. The Costumes Are "Aged" For Two Weeks For Optimum Grit & Grim

Breaking in the costumes prevents them from looking Halloween-ish. Clapton told The Hollywood Reporte r, “You spend two weeks breaking down, patching, dying, repatching. Then you trash it, age it, then trash it again and repair. You can’t just stick a couple of patches on it and spray it with dirt because that is exactly what It will look like on HD televisions.” I just hope the aging doesn't come with any funky smells.

Joffrey's wedding crown consisted of his Baratheon alters with roses peering out within in it. In contrast, Margaery's crown was mostly roses. Clapton explained that the idea was that Margaery was slowly beginning to wrap around and control Joffrey. Luckily, Joffrey was posioned to death before it ever came to that.

3. More Than Two Feet Of Human Hair Is Used To Make The Show's Wigs

That's a lot of weave, and it's super expensive considering the fact that each wig cost about $7,000 to make.

Not only are the actors required to wear masks and be covered in white paint, but they also have to wear some very creepy blue contacts.

5. Game of Thrones Brought A Lot Of Bones From EBay

Since the Wildlings' costumes are meant to mimic things that they would find beyond The Wall, they consist of leather, fur, and animal bones. But where did all of those bones come from? Clapton told The Hollywood Reporter that the show purchased the bones from eBay.

6. Dany's Costumes Have Progressed With Her Character

In Season 4 of Game of Thrones, Daenerys wore a ton of blue. She was still morning the death of her husband Khal Drogo, and blue is a Dothraki color. This past season, she wore a ton of white and dove grey, which Clapton says suggest power and immortality. She told Fashionista that Dany's jewelry choices also got more armor-like because she got more aggressive.

Oberyn's daughters, the Sands Snakes, banded together with their mother in order to seek revenge on the Lannisters for Oberyn's death. However, their armor caused a bit of a ruckus. In image stills from the show, you can see nipples in the breast plates. Luckily, in real time, they aren't visible.

In a Reddit AMA, Harry Lloyd, who played Viserys, revealed that his golden crown was "a big bowl of gold-gelatinous-paint... a smoke machine, strapped to my chest... a nice gold cap molded to the shape of my head... a bit of CGI, and some sound FX." What an epic way to go out.

Despite her wonderful work on the series, Michele Clapton won't be returning to Season 6 of Game of Thrones. Though the amazing designer will be moving on to other things, I'm really thrilled that she's left such an amazing blueprint behind as the show continues.