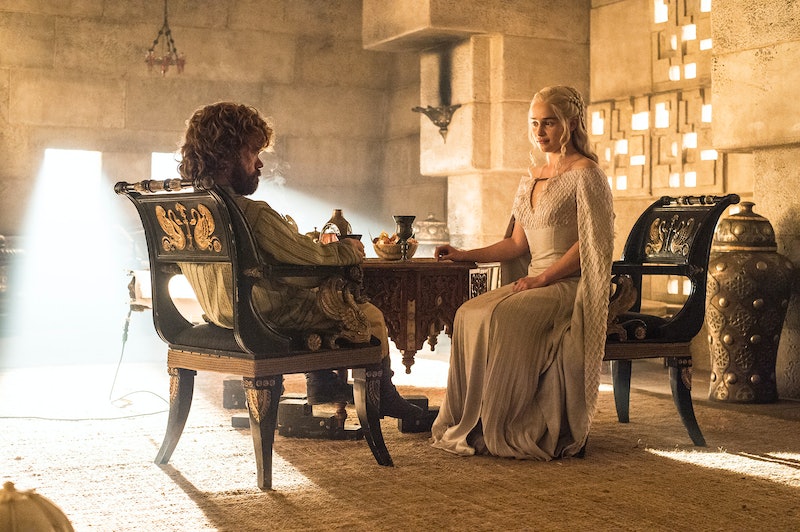 The 2015 Emmy nominations are out, and the big winner isn't necessarily alternative programming this year. While Netflix and Amazon series are still going strong, Game of Thrones is leading the Emmy nominations with a whopping 24 nominations in 18 categories. Which, I have to say, is pretty decent for a fantasy show in its fifth season. The HBO series is in no way forgotten. Nominations don't equal wins, but is Game of Thrones just undeniably the best show on right now?

Let's break down who got nominated for what. In the acting categories, Peter Dinklage is nominated for the fifth consecutive time for Best Supporting Actor. He won in 2011. Nominated for Best Supporting Actress in a Drama are both Emilia Clarke and Lena Headey, who have both also been nominated before. The final acting nomination went to another repeat nominee, Diana Rigg for her portrayal of Lady Olenna Tyrell, the Dowager Countess of Westeros. Game of Thrones is fast becoming the dramatic Modern Family and I'm not mad about it.

Game of Thrones was nominated twice for Best Director, for the Season 5 finale "Mother's Mercy" (which also picked up a nod for Best Writing) as well as the sixth episode of the series"Unbowed, Unbent, Unbroken" which featured the return of Olenna Tyrell and some major action in Dorne — though I wouldn't blame you for not re-watching because it's also the episode in which Sansa Stark marries Ramsay Bolton. I think I would have chosen a different episode if I had to pick two, but it's still pretty awesome that multiple directors are getting recognized for this series!

Personally, I think this definitely indicates that Game of Thrones is a well done show. It's cinematic and beautiful. The casting is always on point and it's easy to sink into the world of Westeros, which all shows aim to achieve. As a writer, I'm biased and think they'd need multiple writing nominations to be a truly great show in the eyes of the Television Academy. The fact that so many actors are able to stand out and be recognized in such a vast ensemble cast with no true hero (too soon, Jon Snow fans?) is definitely an indication that Game of Thrones is special.

All of that said, Game of Thrones has come under a lot of criticism in the past few years for its treatment of rape and violence against women — and the fact that both of the episodes nominated for Best Director feature female characters being humiliated in different ways does not go unnoticed.

It may be the best show on air, but that doesn't make it perfect.