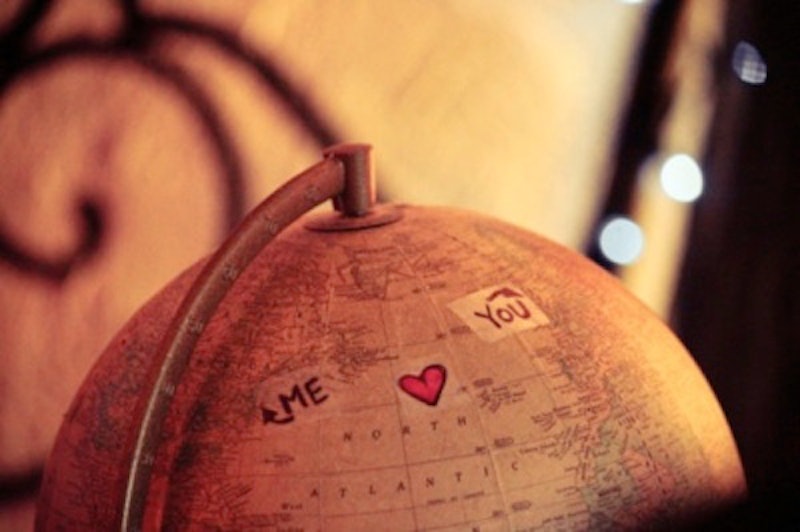 Anyone who’s ever tried the long distance thing will tell you it blows, it sucks, it takes its toll, and it’s likely to be the reason that, before you know it, it’s all kaput. People can be so negative about long distance relationships! But while distance can be the factor in the demise of some relationships, sometimes it can strengthen what you've got because you’re forced to work a little bit harder. It’s not an easy task to keep love alive when you’re states away, or have an ocean between you. It’s actually quite an emotional and physical rollercoaster that isn’t for the faint of heart, my friends.

So let’s get this carnival ride of emotions started with the good, the bad, and the obvious. Afterward, you can decide if it's something worth giving a whirl should the circumstances arise for you and your partner.

You get to sleep alone!

You have to sleep alone.

You get happy every time he calls.

But then you'll second-guess your relationship two days later for no real rational reason.

Every movie will be about your relationship, because of course it is.

Same goes for every song.

You’ll constantly try to make others feel better about their pity for your situation.

You'll have some nights where you revert back to your old single ways...

You’ll have loads and loads of time for the ladies in your life.

But you'll also get to indulge in a lot of healthy alone time, too.

You’ll get to make the occasional dramatic plea as if your life is an HBO series.

Then you'll do this move right afterward every time...

But then you'll regroup, because he'll come to visit or you'll visit him!

But then you'll have to separate again, so you'll scream and yell and curse the cities in which you both live.

Let's be honest, at the end of most days, your heart will feel a little bit like this...

And most definitely this...

But just remind yourself that it's worth it, because love is something over which to be really excited; like really, really. Really.