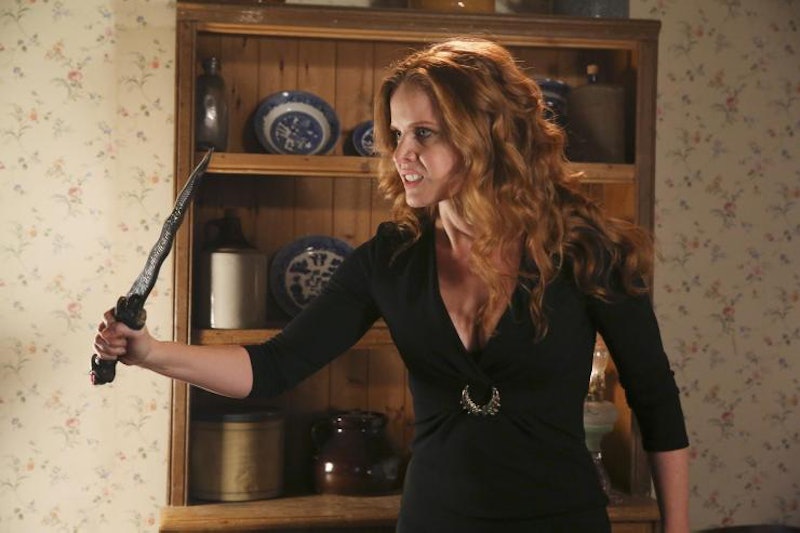 While we're all trying to stay calm about the whole Dark Swan storyline we've got to deal with on Once Upon A Time Season 5, it can be hard to remember that there is more to the show than Emma Swan's rather precarious situation. After all, the former Savior's transition to the Dark One will without a doubt provide the impetus for much of what happens in Storybrooke and beyond (hello, Camelot!) for at least the first half of the season. However, there's a whole other predicament that's buried in Storybrooke's equivalent of Bedlam, and that's Zelena. When last we saw her, she was entirely powerless and, as it were, pregnant with her sister's boyfriend's baby. But could she rise again to become the big bad villain she was born to be this season? It certainly seems that way!

During an appearance at Disney's D23 expo in Anaheim, California last weekend, Once executive producers Adam Horowitz and Edward Kitsis warned viewers not to count Zelena out just yet — she may be down and out now, but she won't be forever. Somehow, she'll find a way to fight back. “I would say she is sort of the Hannibal Lecter character of the show. She lives up to her wicked name this season," Horowitz said. To further tease us, Kitsis added, "It's hard to keep a good wicked witch down." Touche!

I've said before that I don't believe Zelena can ever truly be redeemed — not in any meaningful or believable way, anyway — and that's okay. Every series needs a good villain, because it's the villains that make the hero's victory that much sweeter. Writing the character in such a way that she suddenly had a change of heart and had decided to become good and embrace her sister as the family she's always wanted is sweet in theory, but a complete waste of not only Zelena as a character, but of Rebecca Mader's incredible ability to perform the role with such delicious campiness. That being said, I'm glad we're on the same page when it comes to keeping Zelena evil.

Zelena may have a cuff on to keep her magic at bay at the moment, but how long do we really think that's going to last? The fact that she sat through several episodes of 4B in her cement-walled cell without much complaint and only a single sarcastic comment about putting the kettle on for tea is already a little eyebrow-raising, and probably a pretty bad omen, as well, that Zelena is cooking up something bigger and much worse. Given that Mader was made a full blown cast member for Season 5, it's safe to assume the Storybrooke crew won't be leaving her behind while they head off to Camelot, though what justification they'll have for carting a prisoner to another realm on a mission that has nothing to do with her, but I'm pretty sure that's what happening.

So what will Zelena get up to in Season 5? If the Wicked Witch is going to rise again, how will she do it and what exactly will happen once she has her power back? She'd better time it right, that's all I'm saying — I doubt the Dark One will take too kindly to any competition.