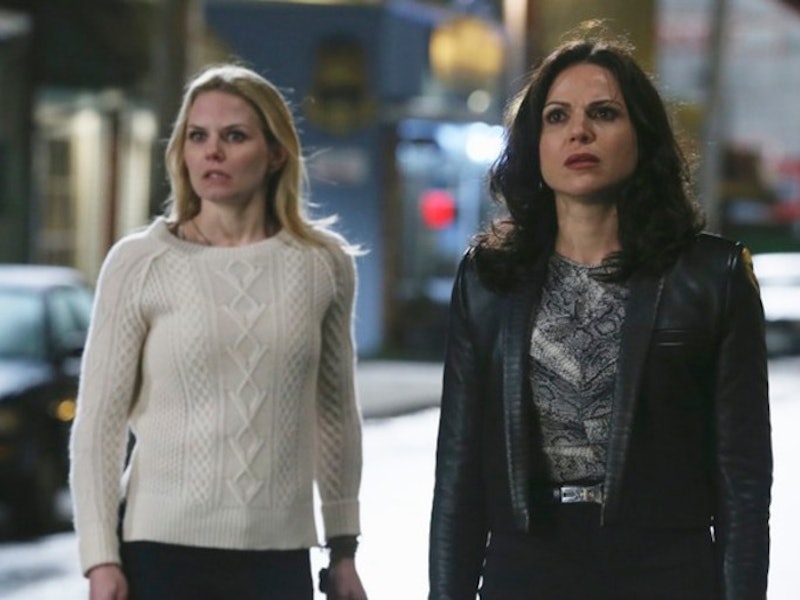 My patience as we wait for the premiere of Once Upon A Time Season 5 at the end of September is wearing dangerously thin. The TV series hiatus is always tough — doubly so for this show, which tortures us with two breaks a year — and given the way things were left back in Storybrooke, is it any wonder that the fans of the series are desperate for the next batch of episodes? Unfortunately, we've still got another six weeks or so to go, so we'll have to just take a deep breath and wait it out. We are at least getting closer every day, a fact which is evident after reading TV Guide's synopsis for the Season 5 premiere episode.

It's not necessarily that the synopsis reveals too much information, but rather that it confirms some earlier speculation (and a few things we already knew). "Emma's friends and family, led by Regina, will try to find a way to save her before she becomes the full-on Dark Swan. But this means tracking down the sorcerer Merlin, which brings them to Camelot and the Knights of the Round Table," read the TV Guide Fall Preview. The fact that we're going to Camelot will come as no surprise, nor will the suggestion of tracking down Merlin. I'm more interested in the fact that, as I suggested months ago, Regina will indeed get to switch roles with Emma and play the hero for a while.

Of course, this development isn't really a surprise, either. After all, there was literally no other logical way for Operation Emma to proceed than for Regina to lead the pack. Not only is she the person for whom Emma even sacrificed her soul, but she's also the most experienced and gifted with magic, and they'll need a lot of it, not only to deter Emma from performing too many dark deeds, but to restore her to her former Savior self. It's also heartening to see the show writers honoring the fact that this show is, at its core, about strong women, and more particularly, the strong bond between Henry's two moms and the way they've changed and saved one another over the years. It would have been tempting to paint Hook as the hero of the day, especially considering his current relationship status with Emma. Thankfully, we're not even going there — and that's how it should be.

One thing's for sure: we're in for some serious drama and some bigtime action when Once returns to our screens on September 27, but I feel confident knowing that we've got the likes of Regina at the helm of Operation Emma, and so many others who love and care about the Savior working hard to get her back. It won't be easy by any means, but at least it'll make for good TV.