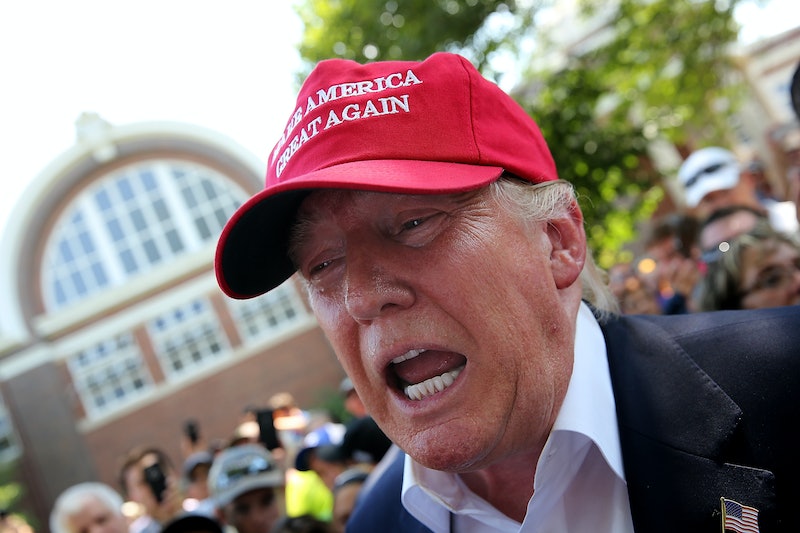 Donald Trump, the Joe Pesci of the 2016 election cycle, is on the current cover of TIME magazine, looking every bit the antagonistic egomaniac that he is. From the look in his eye to the title of his profile ("Deal With It"), we're practically getting beaten over the head with the message: Donald Trump is never not going to be his abrasive self, and he's not going away, so we better get used to it. And to further broadcast that message, Trump targets multiple people in the interview, throwing shade like ninja stars. The presidential candidate takes jabs at everyone from Hillary Clinton to even Jimmy Carter, illustrating that nobody — literally nobody — is safe from his insult campaign.

The overall angle of the profile feeds into Trump's hostile nature, arguing that it's what has made him so successful in the 2016 race so far. While most outlets have criticized his behavior based on the traditional norms of campaign behavior and human decency, the TIME piece gives a more realistic take: Trump has not only defied these norms, but is redefining them. By attacking others, boasting about his wealth, and refusing to filter himself when it comes to his racist and sexist remarks, Trump is clearly breaking the rules. But what we're not seeing is that he's somehow making new ones.

Naturally, buoyed by such a generous assessment, Trump felt completely at ease with hurling the insults. Here are 12 targets of Trump's shade in his talk witha TIME.

I don’t think the people running for office are real. They have to throw a lot of consultants away and be themselves. I think it is one of the things that has helped me.

I’ve always felt that when Jimmy Carter would walk out of — off Air Force One carrying his own suits and bags, I always said, that’s not what the country wants …

When commenting on his ostentatious entrance at the Iowa State Fair, he threw in a jab at Jimmy Carter, whose predilection was to carry his own suitcases and seem more of the people. Judging by Carter's recent press conference about his cancer status, however, there's no contest when it comes to who's had a more fulfilling life.

When was the last time that you saw this country have a victory? We don’t have victories.

Bill Clinton had a lot of problems with the Monicas of the world, and had he not had those problems, he would have had a pretty good presidency — not a great one, but a pretty solid presidency. But that was a disaster and a tremendous distraction.

I’m just as disappointed with the Republicans as I am the Democrats. It’s just so false and so phony and they can’t move — it’s moribund. They become weak and ineffective, except with one thing, getting themselves re-elected. That’s the one thing they’re good at.

Trump also said he believes Perry wears glasses "so people will think he is smart." Not the most original burn, but perhaps an accurate one. I'll give him that.

Besides calling him "a stiff," Trump also commented on Lindsey Graham's dire unpopularity:

Senator Lindsey Graham was doing fine. Nobody got more publicity than this guy — he had zero.

And now Rand Paul's going down the tubes. All of a sudden, he came out of nowhere and he hit me, and ... I hit back very hard. I think I hit back sometimes much harder than they hit me ... I think he's totally taking advantage of the people in Kentucky, because what are they, an afterthought? "If I don't win here, I'll go back to you." Somebody should primary him out.

If I was the governor of New Jersey, the George ­Washington Bridge would not have been shut, if you talk about temperament.