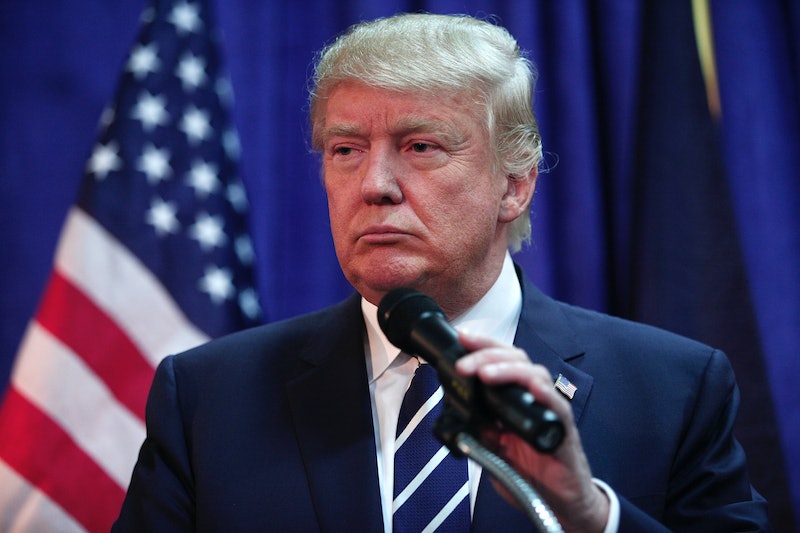 Donald Trump's presidential campaign is still doing surprisingly well, considering the billionaire has said some pretty offensive things and is, you know, himself. He even appeared on the most recent cover of TIME magazine, proving that his campaign is being taken seriously. This wasn't his first cover photo shoot, though. Trump's been on many magazine covers over the years, from Playboy to Bloomberg Businessweek, and each picture reveals a slightly different side of his cocky, intimidating personality.

In most of Trump's cover photos, he's either making his well-known "you're fired" face and pointing threateningly at the camera, or holding a very serious facial expression. The covers where he veers away from the expected are the ones that are really amusing, though — a young Trump looking a little terrified next to a Playboy bunny is vintage magazine gold. While you can see him progressively age as the photos become more recent, he still looks exactly the same, just with more wrinkles and lighter hair. His uniform of a suit and tie never changes, either, except to get even more classy with a tux every once in a while.

Here's a definitive ranking of Trump's magazine covers over the decades.

This is pure perfection. What could possibly be better than Trump adorned in shiny bling and striking his signature pose? I'll tell you: absolutely nothing.

Just the fact that a current presidential candidate was once on the cover of Playboy is hilarious, but the look on Trump's face in this 15-year-old photo is also priceless.

Trump's skin is exceptionally orange in his last TIME cover, from 1989. The strategically-placed ace of diamonds also really adds a lot to the overall look.

It's been a big week for Trump — he's also on the cover of the latest Hollywood Reporter . This photo is so great, because Trump's actually doing something other than his normal pose. But who is he shushing?

Trump's Bloomberg Businessweek cover is nothing new. However, you do get an up-close look at his unruly eyebrows.

His GQ India cover is pretty typical Trump, which is always entertaining on its own.

Yes, Trump's most recent TIME cover photo was shot by an excellent photographer. But it feels like Trump's eyes follow you around the room, which no one wants.

This rare photo of Trump smiling like a normal human is overshadowed (literally) by the shadow hiding half his face, making him look 100 times more creepy.