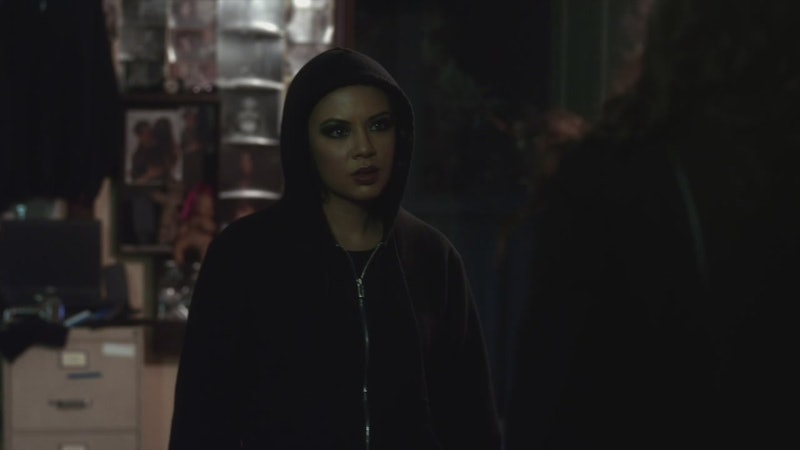 Unless you've been living under a rock (or lack access to Twitter, Facebook, Instagram or cable) then you know that Pretty Little Liars revealed that Big A in none other than Cece. Obviously, the Big A reveal was the pretty damn mind-blowing: who would have thought that it was Ali's older confidant and loyal "helper" who was really the one meticulously stalking and torturing the girls? Well, you might have thought that if you remembered the A who did it first — Mona. Mona was Hanna's BFF, yet she totally played her (and all of the other girls) in order to seek vengeance on them for their loyalty to Ali. Mona may have been evil (or, at least, "sick"), but she turned into one hell of a badass. And sorry, Cece — but Mona may played the A game better.

Mona redeemed herself in the later seasons of the show (being kidnapped and locked in a dollhouse for months will certainly do that to you), but that doesn't change the fact that she was the show's ultimate villain. And we all know that if Mona wanted to reclaim the A game, she totally could.

Plus, as the editors on our Bustle Pretty Little Liars podcast would tell you, the CeCe A reveal did not go over so well:

Here are all of the reasons why Mona was the best A on the block:

1. She Knew How To Hide Her Intelligence

One of the main reasons that the girls never suspected Mona could be behind A's hoodie? She was too busy playing the slightly airheaded Queen Bee to draw attention to herself. In hindsight, playing dumb was her smartest move.

2. She Was A Ruthless Leader

Mona took more than just fashion tips from Ali — she also knew how to keep her followers in line, even if that meant with threats. If this is how "non A" Mona talked to her best friend, I can only imagine how she spoke to Lucas and the other blackmailed members of the A team.

3. She Was A Master Of Games

Long before she ever donned the A hoodie, Mona was sending secret messages and cutting people down before they could even realize what she was saying. Bow down to the master of wordplay, ya'll.

4. She Got The Best Revenge

They say living well is the best revenge, but I'm not so sure that Mona would agree. The best revenge is driving your sworn enemy out of town and then taking over her throne as Queen of Rosewood High.

5. She Was The Sassiest

Those A texts were filled with biting wit, but Mona didn't just spew out hilariously venomous lines via iMessage.

6. Her Villainous Speeches Were Pure Poetry

7. Even Her Dream Self Could School You

Mona's "ghost" appeared to Ali in a dream all white-faced and snarky and proceeded to drop major truth bombs about the DiLaurentis family. Few characters have enough power to invade one's psyche like that, let alone help you realize that your family has plenty of skeletons in the closet.

8. Black Hoodies Looked Fab On Her

How is it possible that Mona actually looks chic in an oversized sweatshirt?

9. Even Though You Should Hate Her, You Kind Of Love Her

Somehow the fact that Mona ran over Hanna with her car, attempted to ruin every relationship in the girls' lives, and was a full-fledged psychotic stalker doesn't deter from her likability. I know, I'm confused too. Heck, I'd kinda want to be friends with Mona — if only because it would be way better than being her enemy.

Sorry, Cece, I'mma let you finish, but Mona was the best A of all time.