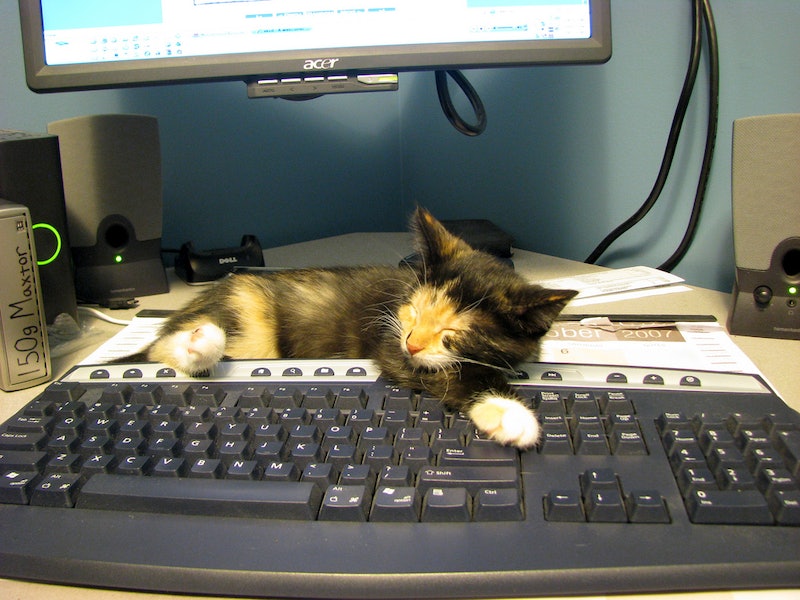 Say this out loud: Napping at work has a ton of benefits. Now say it louder so your boss can hear! According to a recent study by the University of Michigan, napping at work is tied to increased productivity and creativity, improved memory and alertness, and a decrease in mistakes. If that's not reason enough to kick off your shoes right now and sneak in a snooze at your desk, I'm not sure what is.

To be fair, though, this isn't entirely new news. Past studies have also found that taking power naps can have definite health and wellness benefits. Because of this, some companies have actually made it a priority to let employees sleep on the job in nap rooms or futuristic sleep pods, including The Huffington Post, Google, and Ben & Jerry's. There are even tons of products known as "nap helpers" to make it all even easier (like this Wrap-a-Nap, which basically acts as a pillow, a blindfold, and an earmuff all in one). But still, napping at work is far from the norm. And Bloomberg News' Rebecca Greenfield thinks she knows why the trend will never truly catch on in most offices. In a recent post on the subject, Greenfield wrote:

Despite a growing philosophical acceptance of napping and the increase in nap rooms at offices, getting some shut-eye at work doesn't make much practical sense. Most work days don't, like kindergarten class, have a built-in nap time. The office can't and doesn't stop for your sleep break ... There's [also] the question of where to sleep, especially if there's no nap room. Only 6 percent of companies surveyed by the National Sleep Foundation in 2011 had designated nap rooms. "That’s the crux of the problem," says Christopher Lindholst, founder and chief executive of MetroNaps, which manufactures sleep pods. "Where do you actually go if there is no place in your workspace to take naps? You could lie under your desk, but mostly people don't want to be seen sleeping on the floor."

To explore this further, Greenfield tried to take a 20-minute nap during her workday — the optimal amount of time for a power nap, according to sleep experts. She reports that she never once fell asleep at work, though, and was frequently uncomfortable. If you too have a dream of one day napping at work, though, don't let this news deter you. I have some ideas for how to make it work better. Here's a list of tricks for sleeping on the job, and (more importantly) doing it well:

1. Take It To Your Lunch Break

Whether you have a half-hour or an hour-long break, you have enough time to squeeze a nap in, provided you have a good location and can take your lunch back to your desk afterward. Greenfield's big mistake, I think, was sleeping at her desk — there's no way that can be relaxing or comfortable. When you go to a second location, you can at least put work calls and emails aside for a little bit. The best time to do that, of course, is on your break.

But where to? Obviously, if your employer doesn't have a nap room, you're slightly limited. But you can get creative — many gyms with saunas have benches you can lie down on, for instance. Alternately, on a nice day you can lie in a nearby park — on worse days, in your car. Just don't do what I did at my first job and take naps on the floor of your office's bathroom — that's incredibly gross. (In my defense, though, it was a single-occupancy bathroom, which is slightly less weird.)

2. Block Out Outside Sounds And Light

Use earplugs, soft music in your headphones, or an app like Pzizz (which wakes you up with an alarm at the end of the guided nap) to block out how LOUD sleeping during the day can be. Some people can just sleep in the daytime by closing their eyes, but I like to put a sweatshirt or something over my face to block out the light. Even better, pack a cute eye mask like this one in your workbag.

3. Drink Coffee Before Your Nap

It sounds counter-intuitive, I know! But drinking coffee before a nap actually helps you feel more reinvigorated afterward. The caffeine won't actually kick in until after you've woken up from the short nap, helping to eliminate any grogginess.

Nap experts say that the ideal afternoon nap lasts between 20 and 90 minutes. I'm assuming that you probably don't have a spare 90 minutes in the workday, so set your phone alarm for a more conservative 20. Think you won't fall into a deep sleep for such a quick nap, and won't need an alarm? You may find that time seems to move a lot more quickly when you're resting your head — so better to be safe than sorry.