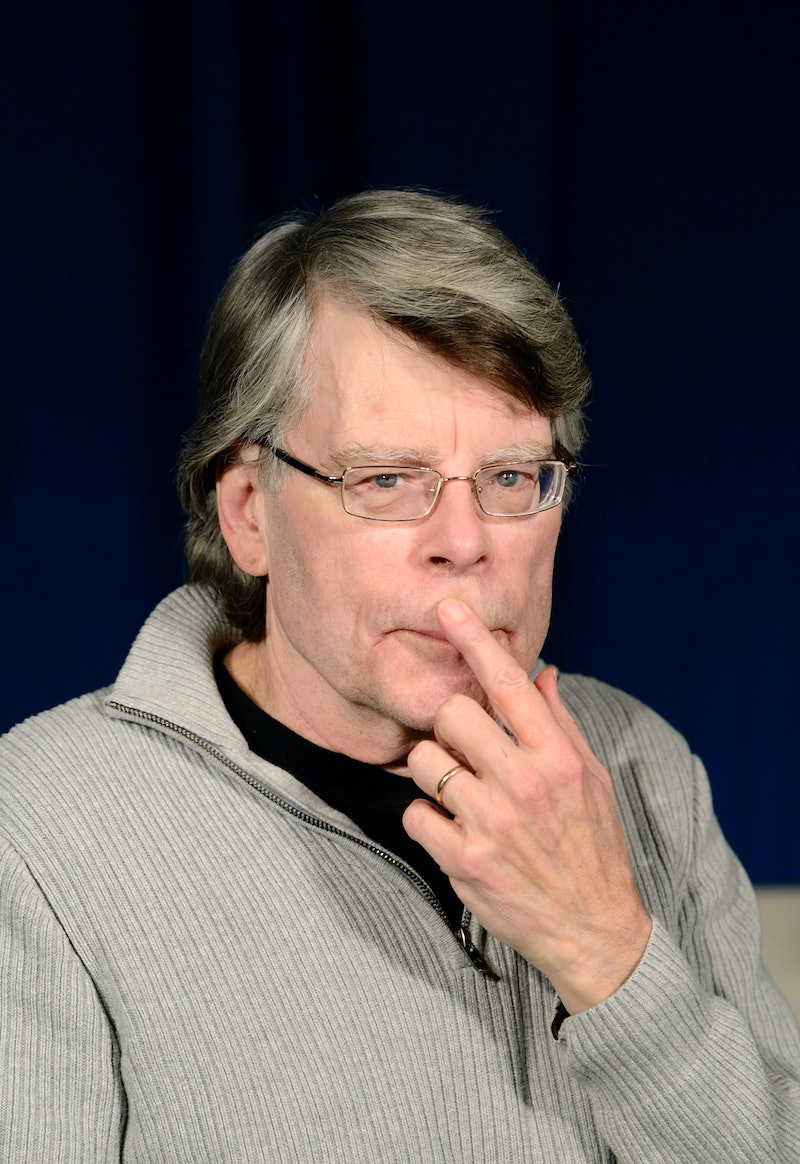 You may have heard of a writer named Stephen King. He wrote a few books that are kind of scary? Yeah? With more than 50 books in print, King is insanely prolific. From classic works of horror like Carrie and The Shining to enormous historical / science fiction books like 11/22/63, King's fans never have to wait too long for his next novel. It seems like the wheels in that amazing (amazingly terrifying?) mind are always turning!

King obviously has a way with words, and his Twitter is no exception. Full of hilarious thoughts and weekly answers to reader questions, it's always entertaining. He alternates between adorable tweets featuring his dog, Molly (aka The Thing of Evil), and recommending the books he's reading. Being the master of horror that he is, I consider him an authority on recommendations in that genre. You could make an entire reading list based on Stephen King recommendations, and be set for a long time.

Here are 11 books that scared the unshakable Stephen King, and so are pretty much guaranteed to keep you up at night and/or give you nightmares. But hey, that's the fun part!

A Head Full of Ghosts By Paul Tremblay

After 14-year-old Marjorie Barrett starts acting strangely, her parents are devastated to find out that she is showing signs of acute schizophrenia. But when doctors are unable to help Marjorie, the Barrett home turns into a house of horrors, and the family turns to the Catholic church, which suspects demonic possession. The family's plight is made into a reality TV series, of course, and things only go downhill from there. Fast-forward 15 years, and Marjorie's younger sister is interviewed about the terrifying past, opening old wounds and psychological horror.

What Stephen King Says: "Scared the living hell out of me, and I'm pretty hard to scare."

King recommends a fellow Edgar Award nominee with Bad Country, a novel about Rodeo Grace Garnet, a retiree scraping by as a bounty hunter. When a body shows up near Rodeo's home, police are brought right to his front door, and he can hardly say no when offered to help solve such an unusual case. What unfolds is a mystery of suspense, betrayal, and (of course) murder.

What Stephen King Says: "Terrific crime/suspense/mystery novel, but the real revelation is his fresh and original voice."

Four days into a five-day voyage, the cruise ship Beautiful Dreamer stops dead in the water. With no signal in the middle of the ocean, there is no way to call for help. At first, it seems like no big deal. Surely, someone will come looking for them. But as days go by, food runs out, and a body is found in one of the cabins, it becomes clear that something sinister is happening.

Big Little Lies follows three women at various points of heartbreak. Madeline's ex-husband and his new wife have moved to her beach town, and their daughter just so happens to end up in the same class as Madeline's daughter. Meanwhile, Celeste and her husband are trying to become the king and queen of the PTA at their children's school, but just how far would they be willing to go? Then Jane comes to town, and that might just change everything.

What Stephen King Says: "Trivia Night is the climax of Big Little Lies, by Linda Moriarty. It's a hell of a good book. Funny and scary. She nails the feuding moms."

You By Caroline Kepnes

When a beautiful woman walks into Joe Goldberg's bookstore, he Googles the name on her credit card -- Guinevere Beck -- and finds out that she's the only one with that name in New York City. Guinevere's social media accounts tell Joe everything he needs to know, and a chance encounter with him will change her life. As Joe moves from stalker to boyfriend, things take a turn for the terrifying.

King calls this one "old school," and for once, that is a good thing. Ray Garton delivers a thrilling novel about the storm of the century. The storm of a lifetime, probably. As a storm brews off of the coast of California, residents have been told to prepare for the worst. But what do they do when the worst is only the beginning?

Detective Gabriella Versado has seen more than her share of dead bodies. But then a body shows up that's half human, half deer. As more and more of these disfigured corpses pop up, it's everything Gabriella can do to hold on to reality. Broken Monsters features an amazing cast of characters, and a chilling plot that will keep you up at night.

What Stephen King Says: "Scary as hell and hypnotic. I couldn't put it down. Next month. I'd grab it, if I were you."

What do you do when a town called Niceville becomes something not so nice? Ask Nick Kavanaugh, a cop must investigate both a robbery and a disappearance. But Nick has a dark side of his own, and as he and his wife look further into these crimes, they stumble onto a shadow world which has a different idea of justice. Something is wrong in Niceville, and readers won't be able to put this book down until they find out what.

What Stephen King Says: "crazy-good supernatural/crime/horror epic. Blew me away."

The Girl on the Train By Paula Hawkins

One of the most talked-about books of the beginning of this year, The Girl on the Train is still on the bestseller list months after its release. Rachel loves to people-watch on her commute to work everyday. She loves it so much that she makes up a story for her favorite couple. She names them Jess and Jason and dreams up an entire happily-ever-after life for them. Until "Jess" goes missing. Then Rachel becomes implicated in a crime, but she can't figure out how.

What Stephen King Says: "really great suspense novel. Kept me up most of the night. The alcoholic narrator is dead perfect."

The Accident By Chris Pavone

A literary agent in New York finishes an anonymous manuscript that the CIA wants destroyed. Meanwhile, the author is in hiding in Zurich, trying to atone for a lifetime of regrets. The Accident takes place over the course of a single day, as the lives of its characters collide as the book approaches publication. Suspenseful and impossible to put down, The Accident is the perfect book for King fans.

What Stephen King Says: "if you like real nail-biters, this is the best one so far this year."

The Killer Next Door By Alex Marwood

The people who live at 23 Beulah Grove have secrets. They must. Beulah Grove is the kind of place you go to when you're completely out of options. Sounds like the beginning of a Stephen King novel, doesn't it? I thought so, too. The residents of Beulah Grove keep to themselves until a grisly accident forces them together. But what they don't know is that one of them is a killer. Dark, twisty, and perfect for King fans, The Killer Next Door is a thriller you can't miss!

What Stephen King Says: "If you read Alex Marwood's The Wicked Girls, her new one—The Killer Next Door—is even better. Scary as hell. Great characters."