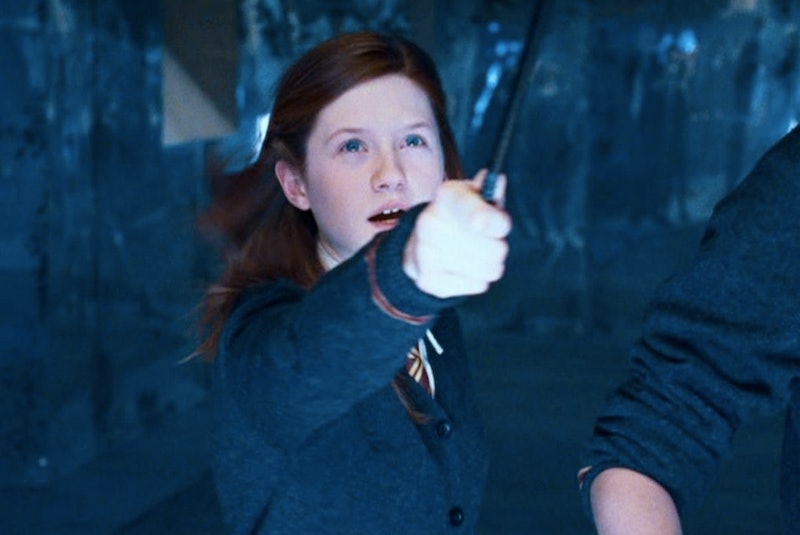 They exist in every film — those female parts who hide in corners, delivering a genius line or two before receding into the shadows again. It's been called the "Judy Greer effect," though the roles aren't quite as "thankless" as The Week would have us believe. Small parts can say a lot about the actors who perform them, because it requires the actor to make more of less material. In the case of these secondary female characters who deserve more attention, they show just enough verve for us to know they are awesome, but not enough to satisfy our desire for more.

At the end of Harry Potter and the Deathly Hallows (the book as well as the film), the unlikeliest of candidates gets the guy. Ginny Weasley begins the series as the cute but irritating little sister of Harry's best friend Ron. By the end of the books, she's married to Harry Potter himself. But the films don't give her nearly the screen time that this evolution demands. This is the fate of many small female roles. They cannot develop enough to really get a handle on what they're about. Some incredible small female roles do exist in the background of films (just as some incredible male roles exist — this is what supporting actor awards are all about), adding depth and vitality to the story on screen and showing that feminists can be found in the least likely of places.

Django's wife Broomhilda's kidnapping sets him off on the entire adventure of the film. Though she's only seen in flashbacks for much of the film, when she finally appears, it's worth the wait. Quentin Tarantino has a knack for writing empowered women, even when they're part of the supporting cast.

2. Ginny Weasley — Harry Potter (Just About All Of 'Em)

From little squirt to tagalong to love interest, Ginny Weasley underwent a maturation behind the scenes of Harry Potter. While everyone was focused on how Hermione did her hair for the Yule Ball or Harry's first kiss with Cho Chang, Ginny experienced her own rites of passage that culminated in her marrying Harry Potter by the end of the series. She's a fearless world-class wizard, and being a secondary character doesn't do her justice.

Johanna first appears in Catching Fire stripping down to nothing at all in an elevator, showing off for Josh Hutcherson's Peeta. The District 7 victor for the Hunger Games, Johanna is viciously clever and will stop at nothing to preserve herself. But she proves an invaluable ally to the resistance, and her skills come in handy. She's one of the few who will make it to the end of the trilogy and see the Capitol fall.

The amazing thing about George Miller's Mad Max reboot is that Imperator Furiosa isn't the only empowered woman. The film really does not privilege any particular conception of femininity — they're all equally valid. This is as apparent in the grizzled older women of Furiosa's tribe as it is in the waify, conventionally beautiful wives of Immortan Joe. They have ample opportunity to prove themselves, and Riley Keough, Rosie Huntington-Whitely, Zoe Kravitz, Abbey Lee Kershaw, and Courtney Eaton are all the behind-the-scenes heroes of the film.

Though Mal is never a living, autonomous being during the period that Inception occupies, she's still not entirely a manifestation of Leonardo DiCaprio's guilt. Marion Cotillard's performance is subtle and nuanced — DiCaprio praised, "She can be strong and vulnerable and hopeful and heartbreaking all in the same moment, which was perfect for all the contradictions of her character," according to a press release from Warner Bros.

Black Widow probably won't ever get her own film, and that's a shame because her back story is relegated to a side plot in a film filled with larger-than-life characters. There's so much potential there, though. Female superheroes are few and far between (so we'll welcome Captain Marvel with open arms), and it's high time they got the same reboot treatment as their male counterparts. (How many iterations of Spider-Man have there been at this point? And Ant-Man? Really?)

Maybe I have a soft spot for Edna because I've compared myself to her on multiple occasions, but she is critical for the Incredibles' success. Who else would be able to tailor a suit exactly to their needs? And no capes, obviously.

As Bustle previously noted, Diggy is the female answer to the bildungsroman's inevitable male sidekick. She's hilarious and edgy and I'd love to be friends with her.

All too often, the female supporting characters — particularly a few amazing empowered ones — are forgotten in the momentum of the main plot of a film. But these ladies are full of life and agency of their own. Any one of them could just as easily star in her own film, because I'm sure there's enough going on in her head and her life to make something we'd all like to see.