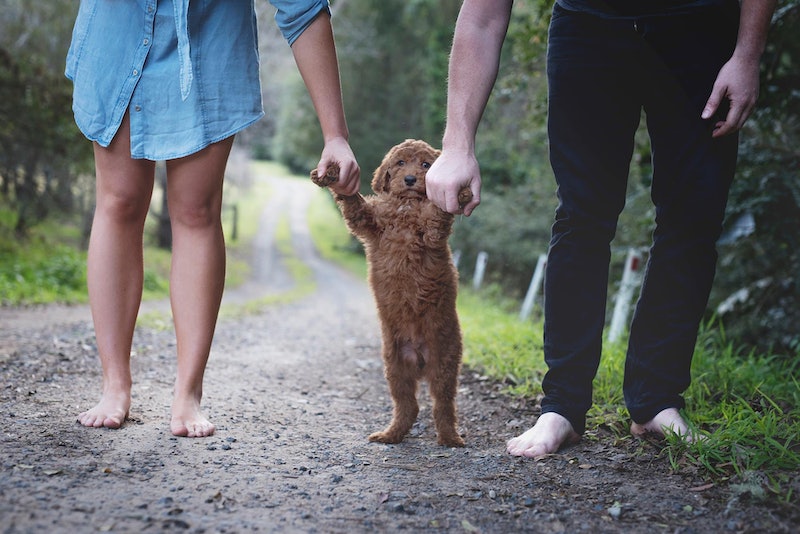 Who says you need to actually have a baby to shoot squee-worthy baby photos? These hilarious family portraits of a couple and their puppy prove that furbabies can rock newborn shoots, too. Recently Abby Lee and Matt Kay teamed up with their friend and photographer Elisha Minnette, based in Australia, to photograph them with their newest edition: A Groodle puppy named Humphry. The resulting photos mimic many of the standard poses found in newborn shoots, from the obligatory “Tightly Swaddled Baby Against a White Sheet” pic to the requisite “Three Sets Of Bare Feet Poking Out From Under The Covers” shot. The images may gently parody the baby portraits we’ve all seen before, but they are also fun and incredibly adorable in their own right. If you’re a dog owner like me, you’ll find yourself unironically wishing you had done a similar thing when your furry friend was a puppy. (But, hey, I could still do graduation photos when she finishes obedience school, right?)

Minnette told Bustle that she and Lee came up with the idea for the photo shoot when they were driving home from picking little Humphry up from the breeder. She said, “Abby and I have the craziest sense of humor and we feed off of each other with ideas.” She went on to say, “The shoot was hilarious. Everything went soo smoothly. The pup was enjoying every second of it, and all the treats he was getting.”

Minnette emphasized that the photos were not intended to make fun of parents who do photo shoots of their real, non-furry babies, explaining, “We did this shoot just for a little bit of humour between ourselves and our closest family and friends that have the same sense of humour as us. We did not expect this to get as big as it has.” With over 19 thousand “likes” on Facebook, the photos have been a huge success, undoubtedly in no small part due to the fact that Humphry is pretty much the cutest model ever. Seriously, that shot of his little furry paws sticking out from under the blanket SLAYS me.