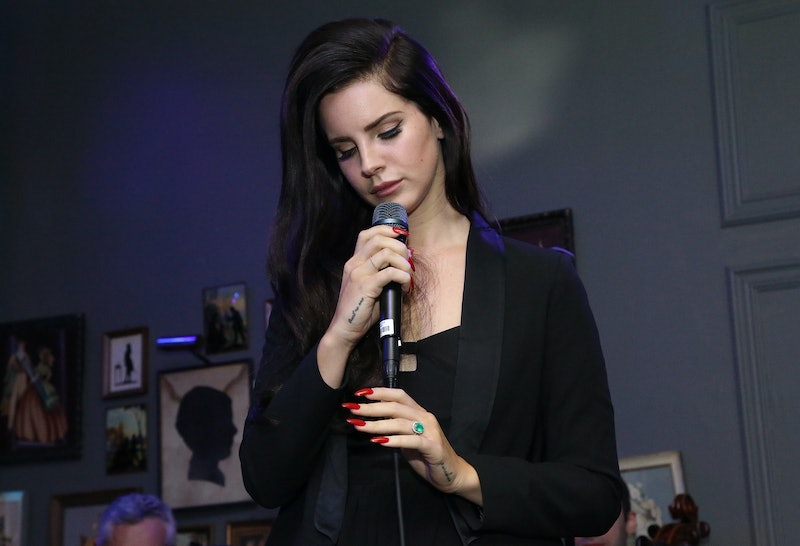 On Friday, bazooka-wielding indie pop artist Lana Del Rey premiered "Terrence Loves You," a new song lifted from her upcoming fourth studio album, Honeymoon (due out Sept. 18). I often have a hard time connecting with the 30-year-old singer's slow-burning ballads — I think they frequently emphasize style over substance — but this one is different. Lana Del Rey's "Terrence Loves You" lyrics tell the story of a woman who just can't seem to let go of a former lover — and it's absolutely heartbreaking. The memories of their time spent together follow her around everywhere she goes, like shadows. On the first verse, Del Rey (or her narrator) laments:

You are what you are

I don't matter to anyone

And all of what's hidden

Well, it will never grow cold

But I lost myself when I lost you

But I still got jazz when I've got those blues

And I lost myself when I lost you

And I still get trashed, darling, when I hear your tunes

On the bridge, Del Rey continues to cling to her ex through his music:

I put the radio on, hold you tight in my mind

It isn't strange that you're not here with me

Then, she borrows a couple of lines from David Bowie's famous 1969 track about a fictional astronaut named Major Tom, "Space Oddity":

Putting all the lights on, and the television

Trying to transmit, can you hear me?

Can you hear me all night long?

It's worth noting that at the end of "Space Oddity," ground control is no longer able to make contact with Major Tom — he's lost in the Universe, probably forever. Similarly, the relationship Del Rey describes in "Terrence Loves You" is also lost, and, on some level, I think she knows it. Still, she can't keep herself from reaching out, from hoping that this time, things will be different. Maybe this time, she'll receive a response. It's devastating. Listen to "Terrence Loves You" below.

Hopefully, we'll hear more genuine, emotional material like "Terrence Loves You" on Honeymoon. The song is available on iTunes and Spotify now.

More like this
How To Listen To The 'Love Island' 2022 Soundtrack
By Liv Facey and Sophie McEvoy
Taylor Swift's “Carolina” Theme For 'Where The Crawdads Sing' Soundtrack Is Here
By Jake Viswanath
What Is Elvis Presley’s Net Worth? How The King Earned & Spent His Fortune
By Grace Wehniainen
Big Freedia Reveals The Real Meaning Of Beyoncé’s “Break My Soul”
By Radhika Menon
Get Even More From Bustle — Sign Up For The Newsletter