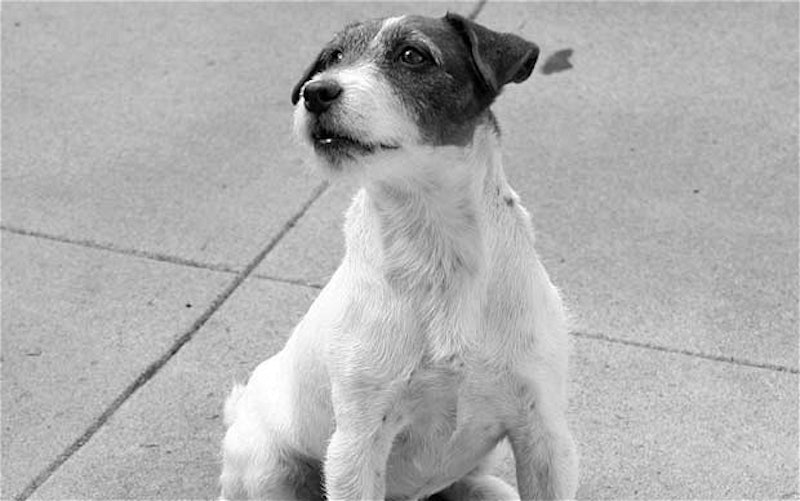 As most people know, I tend to love dogs in film more than people in everything. I mean, if I have to pick between Channing Tatum and Bruiser Woods from Legally Blonde, I'm going to pick Bruiser every time. And, in my adventures of watching dog movies, I tend to find that certain breeds get more attention than others. And in recent years, one breed tends to dominate. Jack Russell Terriers in movies are becoming so common as to be noticeable.

"But Mary Grace," you scream to the heavens, "What about Golden Retrievers? What about Chihuahuas? What about Lassie?" I get it, dear friends. There are a handful of popular breeds for films. I myself own a mini Lassie, and I can tell you that she is the most majestic creature in suburban New Jersey. Actually she's more of a sheltie than a collie but that's... not the point.

The point is, Jack Russell Terriers pop up a lot in films, being all at once small, spunky, and, well, adorable. And, because we like placing hierarchy within the nuances of every aspect of pop culture, I've decided to take a quick look back and rank them accordingly. Of course no dog-in-film is bad by any means, but some dogs are simply destined for greatness.

Definitely an underrated comedy, but Baby, played by famous Jack Russell Terrier actor Barkley, was obviously the break out character here. A dog with perfect vision playing a blind dog with slapstick hijinks? Genius. No wonder Barkley was able to live in the lap of luxury.

Arthur is a delightful detail to the quirkiness of Beginners, that goes without saying. But it's really the chemistry between Cosmo the dog and Ewan McGregor that makes Arthur shine. That's a real Tracy and Hepburn character there.

3. Skip From My Dog Skip

Baby Frankie Muniz stars in this heart warmer of a film, but, as the title promises, it's all about Skip. He is a beloved town figure, and he can drive a car, which I can't even do. I don't know if I truly believe in Skip's greatness, or if really the movie just asserts his greatness the entire time that it feels like it. Either way, don't watch the end unless you love crying.

2. Milo From The Mask

Milo is the perfect side kick and he really brings it in the final act of The Mask. Yellow zoot suit aside, that little pup with a scarily CGI green face is the one thing that truly sticks out in my mind when I think of the movie. Iconic.

1. Jack From The Artist

What can I say that hasn't been said before? Jack is not only an an accomplished actor, he's a hero that saves his owner's life... just like the actor who played him, Uggie. In reality, Uggie took home several awards, such as the Palm Dog Award for "Best Performance By a Canine," and made an appearance in Water For Elephants and The Campaign as himself. Sadly, Uggie passed away earlier this August. Good night, sweet prince.

More like this
'The Holiday' Director Just Addressed *Those* Sequel Rumours
By Sam Ramsden
Lindsay Lohan Just Recalled A Hilarious 'Parent Trap' Story
By Sam Ramsden
Keke Palmer Finally Showed Angela Bassett Her Famous Impression Of Her
By Stephanie Topacio Long
Robert Downey Jr.’s New Film Is A Tender Story of Fatherhood & Forgiveness
By El Hunt
Get Even More From Bustle — Sign Up For The Newsletter