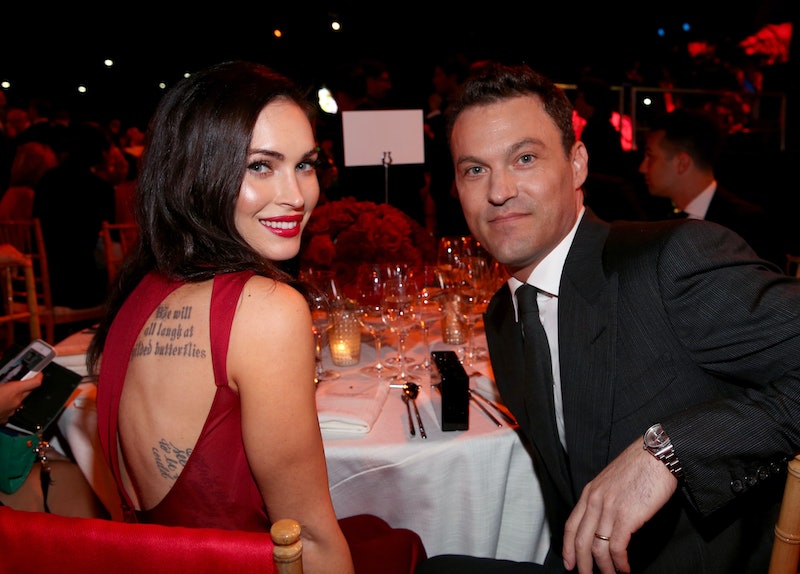 It's been an incredibly difficult year for celebrity breakups. There was Gwen Stefani and Gavin Rossdale, Blake Shelton and Miranda Lambert, and Ben Affleck and Jennifer Garner in the past couple of months alone — but even that wasn't the end of it. Reports surfaced earlier this week claiming that Megan Fox and Brian Austin Green had ended their 11 year relationship and decided to separate. While it was alleged that the couple had decided to split more than six months before the news broke, no one really knew what had happened between one of Hollywood's most beloved couples and where it all went wrong. Now, according to TMZ, they've made their separation official and Fox has filed for divorce from Green.

The story claims that Fox is asking for joint physical and legal custody of their two young sons, two-year-old Noah and 18-month-old Bodhi. They aren't believed to have signed a prenup before exchanging vows five years ago, and Fox is said to have named "irreconcilable differences" as the cause for their split. Given that these reports have not yet been substantiated, there's always the possibility that this is a false alarm and things could work out, but it feels dangerous to get our hopes up. Bustle reached out to both Fox's and Green's reps, but has not yet heard back.

According to the TMZ story, Fox will allegedly pay spousal support to Green due to the disparity in their income levels and the fact that Green is said to have had unknown medical issues which require costly care. That being said, their decision to end their relationship is believed to be amicable and they plan to continue living in the same house, likely to raise their sons together.

Whatever happens, Fox and Green seem to be handling the split with grace thus far, which is a good thing for everyone involved — especially their kids. Then again, this isn't at all a surprise given that they've kept the entirety of their relationship out of the spotlight, which is probably why it worked for so long. I keep hoping that they'll find a way to work things out, but either way, I wish them the best of luck.