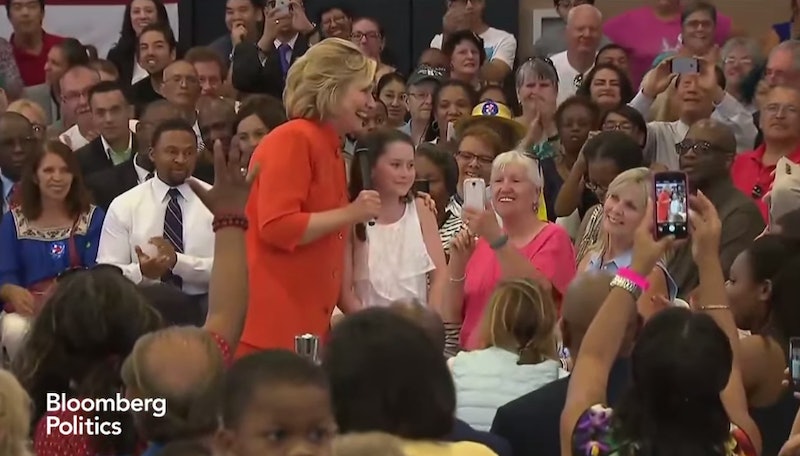 Police tensions, the stock market, a thwarted terror attack. This week has been pretty rough, news wise. Luckily, an interaction between 2016 candidate Hillary Clinton and an inquisitive child is here to lift your spirits in the most adorable and amazing way possible. In a town hall event in Las Vegas, Nev., on Tuesday, one little girl asked Clinton a very important pay gap question that most of Clinton's rivals on the right refuse to confront head-on, leaving both the former FLOTUS and the entire room clutching at their hearts from cuteness overload.

"Do you think when you are president," the young girl asked the former secretary of state, "you will be paid as much if you were a male?" The crowd of supporters, including Clinton, ate it up. After recovering from her laughter, Clinton took a moment to compose herself and give the girl a hug before replying.

"This is one of the jobs where they have to pay you the same," she explained before taking a second to highlight the serious issue of the gender wage gap. "But there are so many examples where that doesn't happen, where women doing the same job are not paid the same."

Clinton also reiterated that as president, she would ensure that the presidency would not be the only position with equal pay regardless of gender.

"I'm going to do everything I can to make sure that ... every woman in every job gets paid the same," she said.

The battle over the pay gap has been a hostile, with both sides of the issue vehemently defending their respective arguments. For example, candidate and Wisconsin Gov. Scott Walker called the issue divisive and "bogus." He also overturned the Equal Pay Enforcement Act two years earlier that afforded women in his state greater ability to collect wrongfully denied backpay. Despite the GOP's claims, the gap exists and has forced a heavier public discussion of what should be done to fix it — or in some cases, what should be done to avoid fixing it.

Take Kentucky Sen. Rand Paul, who along with his fellow Republicans in 2012, voted against passing the Paycheck Fairness Act, which would have opened the doors for women to obtain access to legal channels if they had been paid less than their male counterparts for the same work. In justifying his vote, Paul compared the measure to the Soviet Politiburo's previous stranglehold on bread prices (because comparing women to bread will definitely get you more votes), saying,

Three hundred million people get to vote everyday on what you should be paid or what the price of goods are. In the Soviet Union, the Politburo decided the price of bread, and they either had no bread or too much bread. So setting prices or wages by the government is always a bad idea.

Now that the wage gap debate has heated up again, comments like those have landed tons of politicians in a sticky situation, as the calls for women's equality in the workplace increases.

Florida Sen. Marco Rubio and Texas Sen. Ted Cruz have also tossed their hats into the ring, with both men voting along party lines to trash a equal pay proposal by Senate Democrats last April. Speaking with CNN that same month, Rubio stated the proposals were "really geared toward making it easier to sue an employer" more than anything else. Cruz indicated in an interview on Fox News that rival Democrats had only attempted to pass the bill to "gain political points."

"This has nothing to do with equal pay for equal work," Cruz said. "That’s been the law for decades."

Whether it's been the law for decades or not, the facts still stand on their own. A December 2013 Pew Research Poll showed that, on average, women in the United States made just 84 cents for every dollar earned by their male counterparts. Those numbers were supported by data out of the U.S. Bureau of Labor Statistics which showed that women working the same hours and in the same official capacity generally earned 16 to 19 percent less than men.

No matter which way you slice it, the wage gap exists. The Republicans would do well to follow her example and face wage gap questions head-on.