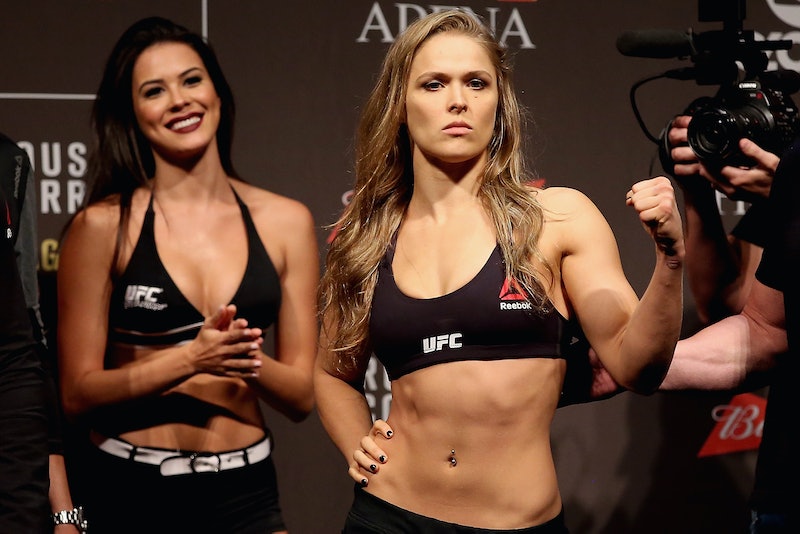 In case you missed it, Ronda Rousey's "Don't be a D.N.B" T-shirts, hoodies, and tanks have been the topic of some debate over the past few weeks. Rousey, the Ultimate Fighting Championship's bantamweight title holder, began creating quite a stir for championing the phrase, "Don't be a do nothing b*tch," when she released a special edition T-shirt run featuring an image of herself along with the controversial term. As it stands, the shirt campaign that was hosted through Represent.com is now complete, having sold 56,798 items. Clearly, despite the controversy, the phrase is a success — at least as far as notoriety and popularity go.

However, one might argue that although Rousey's intentions seem to be in the right place, the phrase fails on a few accounts in terms of its feminist implications. Of course, that's not to debase some of Rousey's other pearls of feminist wisdom. But she's also no stranger to controversy, especially when it comes to her statements regarding transgender MMA fighter Fallon Fox. After having taken an arguably ignorant and transphobic stance and making claims that transgender fighters would have a physical advantage over cis female fighters (an advantage that doesn't exist after a year's worth of hormone replacement, according to the NCAA's medical experts), Rousey fell a few notches in terms of being a role model.

I'm not here to debate Rousey's personal opinions, though, or even to place judgement on Rousey herself. Frankly, I think she's an incredibly talented woman, and although I don't agree with all of what she says, I also don't believe tearing down another woman is beneficial to anyone. It's because of that stance that I think we need to closer examine her statement for a few moments, and delve into why the "Don't be a D.N.B" shirts (and the catchphrase itself) have been met with such conflicting points of view. Rousey has yet to respond to Bustle's request for comment.

If you're unfamiliar with what prompted Rousey to go public with her "Don't be a D.N.B" phrase, you may want to watch this episode of Embedded in which she explains the affection she has for her body and her reaction to being called masculine. This explanation is inspiring, and reflects the body positive stance Rousey has in regard to the female form.

Con: But The Phrase Also Manages To Shame Other Body Types

Unfortunately, in her explanation of the phrase, Rousey ties in derogatory references to women who "just try to be pretty, and be taken care of." She also goes on to mention that her body "was developed for a purpose other than f*cking millionaires," which seems to imply that women who have focused on having a certain sort of physique are of less value — or worse, that those women are all so narrow minded that attracting a wealthy mate is their only concern.

"Don't be a D.N.B" therefore runs the risk of reinforcing extremely negative stereotypes about women who happen to pursue certain physical attributes, and even those who naturally have them regardless of their diet or workout regimen. Frankly, that seems pretty counterproductive for a phrase designed to empower women.

Pro: Don't Be A D.N.B Encourages Women To Be Independent

I do believe that at the heart of "Don't be a D.N.B" lies a pearl of wisdom about having the courage to go out into the world and live the sort of life you've imagined for yourself. It encourages women to look beyond the bounds of marriage or relying on a partner to provide them with financial, physical, or emotional stability, and to forge a life based on individual strength. Any motivational phrase that fosters self development, enrichment, and the pursuit of personal fulfillment is on the right track.

Con: But Also Shames Women Who Choose Not To Be

This phrase arguably makes a negative example of women who have chosen a lifestyle that differs from those who've adopted it.

Until we've walked in another woman's shoes (which we can't actually do), we'll never fully understand her life choices. Thus, judging or shaming her on account of what we perceive her motivations to be, simply for the purpose of motivating ourselves, is pretty detrimental to feminism (and social understanding and equality) on a whole.

If you feel the need to compete to stay motivated, it's wise to keep in mind that you're not competing with other women when it comes to living your life. The only person you're actually competing with is yourself. My stance? Treat other women with the sort of respect you'd wish from them, even if their lifestyle involves choices you wouldn't necessarily make yourself.

Pro: The Phrase Helped Rousey Support A Good Cause

By far the best aspect of this special edition run of T-shirts, hoodies, and tanks is what Rousey did with a percentage of the profits. With the help of her fans and 56,798 sales, Rousey donated a chunk of change to Didi Hirsch Mental Health Services, which provides mental health care and substance use disorder services to communities in need. If "Don't be a D.N.B" doesn't sit well with you, that's OK. But at least you can rest a bit easier knowing that every person you pass wearing one of these shirts has helped support the cause of mental health, which I personally feel is an area our country sorely needs to place more attention and understanding on.

Con: But It Perpetuated The Derogatory Use Of "B*tch"

Personally, I'm all for well chosen obscenity now and then for emphasis, but the catchphrase "Don't be a do nothing b*tch" doesn't seem to be taking the word b*tch back in the name of female empowerment. Instead, it places women into categories and implies that one sort of woman is inherently better than another, then shames those women by referring to them with a nomenclature steeped in connotations of abuse, submission, and being nothing more than a female dog in heat. My grudge here is not with the obscenity, but with the callous grouping and name calling of other women in order to feel better about one's actions and life choices. Sure, it's motivational, but at what cost? Feminism should be about helping us all rise to confidence and success.

When all is said and done, I'll admit I'm not sold on the catchphrase. Yes, I can see why so many women have adopted it and purchased Rousey's shirts as talismans of strength. But when it comes to feminist statements, or even all around empowerment, I find a fundamental flaw in phrasing that belittles one person's choice over another, or specifically shames another person for a lifestyle that involves their consent and the consent of others involved. Sure, I wouldn't choose to lead a life without purpose, and clearly, neither would Rousey. But who are we to decide what brings purpose and fulfillment to another human being?