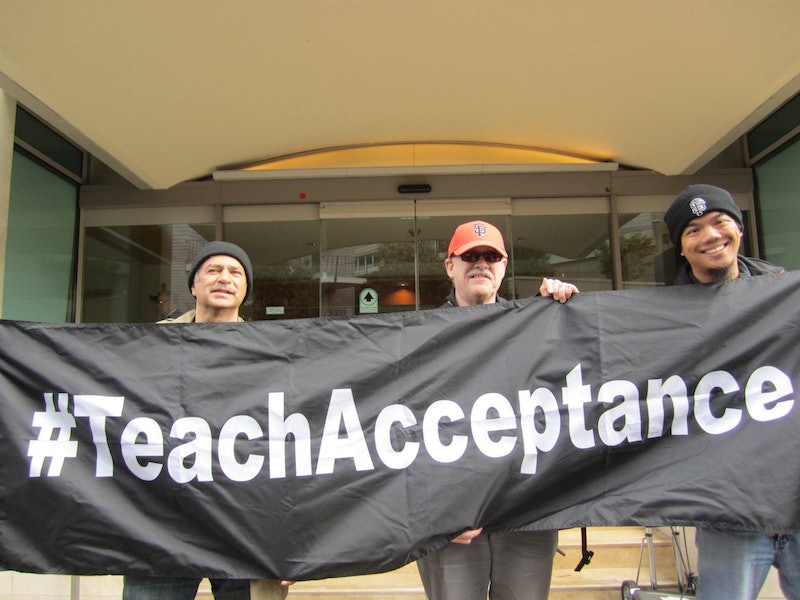 The widely quoted Pope Francis became an emblem of change in the Catholic Church, which still regards homosexuality as an "intrinsic disorder," when, in July 2013, he shrugged his shoulders and said, "Who am I to judge?" It didn't seem to matter that Francis was specifically talking about gay priests, who are becoming increasingly vocal about their sexual orientation — those five words have been propped up by many progressive Catholics, who see glimpses of acceptance, compassion, and dignity in the gentle-speaking Latin American pope. Those progressive Catholics, however, are still waiting for the pontiff's openhearted ideals to trickle down the hierarchy. Last week, the Philadelphia archdiocese blocked LGBT Catholics from Pope Francis' anticipated World Meeting of Families, scheduled to take place in the City of Brotherly Love in September. That brotherly love, it seems, only applies to heterosexual Catholics.

Equally Blessed, a coalition composed of the LGBT-Catholic groups Dignity USA, New Ways Ministry, Call to Action, and Fortunate Families, was preparing to host a hospitality space for LGBT Catholic pilgrims and their families attending the papal visit. A local Catholic parish, St. John the Evangelist, initially opened its doors to the coalition and its gay, bisexual, and transgender members.

According to statements from Equally Blessed and Dignity USA, the pilgrims were planning to use the local Catholic church as not only a meeting space, but also as a place for rest and worship. A transgender workshop led by New Ways, a nearly 40-year-old organization devoted to helping gay Catholics practice their religion without sacrificing their sexual orientation, was also going to be held at St. John the Evangelist.

But on Aug. 17, St. John the Evangelist and the Archdiocese of Philadelphia abruptly rescinded their invitation, barring Equally Blessed and its members from congregating within the halls of a Catholic church during the World Meeting of the Families. "Equally Blessed ... is saddened, frustrated, and deeply disappointed not to be able to host our educational and outreach events at St. John the Evangelist Catholic Church," the coalition said in a statement. "Unfortunately, this is yet another instance of the kind of exclusion LGBT Catholics and supporters have endured for decades."

The decision, the coalition claims, was made by Philadelphia Archbishop Charles J. Chaput, a well-known foe of LGBT Catholics. The 70-year-old archbishop has been known in the past to ostracize LGBT Catholics and their families, reaching national notoriety in 2010 when he supported a Denver Catholic school's decision to deny enrollment to children of a lesbian couple. Equally Blessed said Chaput reportedly took issue with the New Ways workshop, titled "Transforming Love: Exploring Gender Identity from Catholic Perspectives."

New Ways said in a recent blog post that Chaput saw the brochure for the program and balked. A diocesan official then called St. John the Evangelist parish and urged them to cancel the event and, ultimately, kick the members of the Equally Blessed coalition off its premises.

Francis DeBernardo, executive director of New Ways, said of the archbishop's decision in a statement posted on the ministry's website:

I am very sorry that Archbishop Chaput did not seek to speak with New Ways Ministry about the nature of the program, which consists of transgender and intersex persons and a family member telling their personal and faith journeys. There is a lack of information in the Catholic Church about gender identity, and this workshop was designed to provide information based on personal experience. There was no plan to have a theological discussion about gender identity.

The Equally Blessed pilgrims weren't parishless for long — a local Methodist church, Arch Street United Methodist Church, have invited the gay, bisexual, and transgender Catholics to use its space. But the ousting of these prominent progressive Catholic organizations stung a community praying for a return from its religious exile.

"Bishops have refused to allow us to meet in our own Churches, retreat centers and colleges," Equally Blessed said in its statement. "While we know the Church is the people of God and not a building, it is still very painful to be told we or our loved ones are not welcome in our own home."

And though it's no surprise someone like Chaput would close the doors on LGBT Catholics, the ringing message from this debacle is in direct opposition to Francis' call for greater inclusive dialogue in the Catholic Church. Yet perhaps the pontiff's good intentions have been overstated in the last year. One look at the World Meeting of Families agenda shows the Vatican doesn't care about relationships that fall outside the married, heterosexual, non-birth-control-using sphere — a traditional, by-the-Catechist Catholic stance, yes, but not a very applicable one for the modern world.

According to The Philadelphia Inquirer, the only gay Catholic speaking at one of the meeting's Vatican-approved sessions is a celibate man (in Catholicism, having "same-sex attraction" thoughts is not a sin, but engaging in homosexual sex and relationships is). While there are many gay and celibate Catholics in the world, it is only a fragment of the LGBT Catholic experience — and one that many gay, bisexual, and transgender Catholics want to move beyond.

"The good news is, gay issues are going to be talked about openly — it's on the official agenda, and that's a step forward, and I want to make clear we have no objection to gay people who choose celibacy," Marianne Duddy-Burke, executive director of Dignity USA, told the Inquirer. "But it presents a limited view, to say the least, and an unrealistic view of how most gay Catholics and their families live."