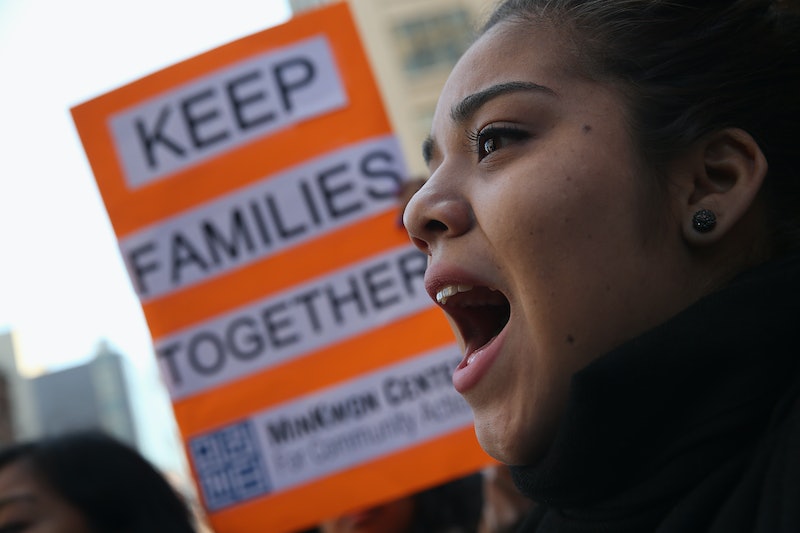 It's happening right now in the United States — immigrants and their families being held in government detention facilities, imprisoned without freedom or agency while their legal fates hang in limbo. It's one of the most controversial aspects of the Obama legacy, and it's been a very urgent topic in the courts. In fact, there's been some movement on that latter point: a California federal judge ordered the release of detained immigrant children on Friday. As the Los Angeles Times detailed, Judge Dolly Gee ruled that their detention violated the terms of a 1997 settlement, which set rules for detention of immigrant or asylum-seeking minors.

What this means in practical terms is that Gee has ordered the release of a slew of immigrant children and their mothers, some 1,400 in all, with a deadline of Oct. 23 for the government to comply. The Obama administration had argued that they were already keeping a quick pace in releasing people, but Gee was not deterred — she ordered that children (as well as their mothers when possible), be freed from detention "without unnecessary delay," as the AP notes.

There's no guarantee just yet whether this deadline will be upheld, however — it's altogether possible we'll see the administration appeal the ruling, kicking it up to the Ninth Circuit Court of Appeals.

Gee didn't pull any punches regarding one of the government's arguments. As Fox News reported, the administration claimed that that a ruling hastening the release of these families would spur a rush of new illegal immigration across the Mexican border, a claim which Gee denounced as "speculative" and "fear-mongering."

Make no mistake, immigration detention centers can by all accounts be dire places to be. As a prime example, just like in American prisons, there have been many allegations and incidents of sexual abuse in ICE detention centers, and the system of handling such allegations is far from functional. As PBS' Frontline detailed in 2013 , some detainees were deported before their cases could arrive at any resolution — in fact, the sordid state of affairs was all laid out in a Government Accountability Office report released that year.

This newest case is far from over, obviously — that's what the appeals process is for — and depending on how far the government decides to take this fight, things could be stalled out for a long while. But it's heartening at the very least to see someone in a position of official power ruled on the side of these children and their families, because the plights of immigrants trapped within the detention system are way too often overlooked.

More like this
How To Fight For Reproductive Rights, Based On How Much Time You Have
By Courtney Young
How The City Healed Five Years On From The Manchester Arena Attack
By Ella Glover
Twitter Was Saying The Same Thing About Sam Ryder’s Surprising Eurovision Result
By El Hunt
President Zelensky Spoke Out On Ukraine's Chances Of Hosting Eurovision Next Year
By Sam Ramsden
Get Even More From Bustle — Sign Up For The Newsletter