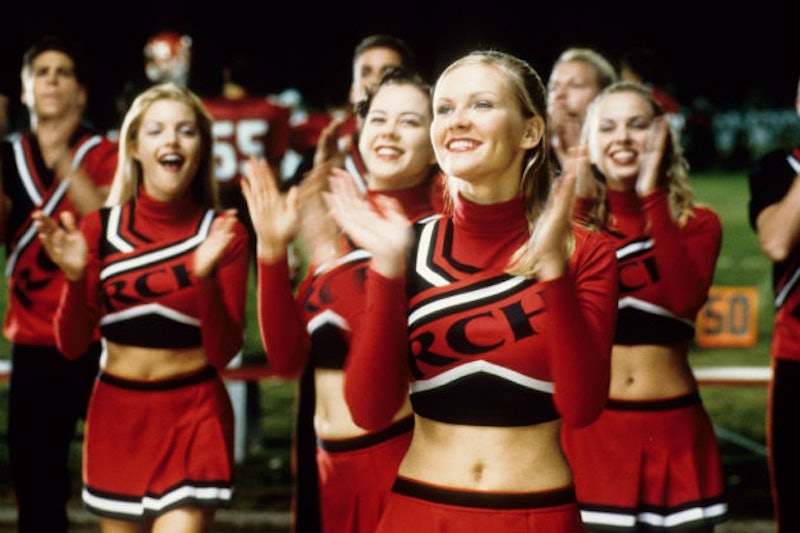 This is a cheerocracy! Fifteen years ago Bring It On was released in theaters and it quickly became the most popular cheerleading movie to any girl who grew up in the '90s/early '00s. The Rancho Carne Toros weren’t just a cheerleading squad, they were the envy of every girl ever, and Kirsten Dunst became a national hero as the film's protagonist Torrance Shipman. Bring It On is a cult classic, and the film spawned four sequels, none of which (in my opinion) made an impact like the original.

The year 2000 started all kinds of great trends — and a couple of bad ones (Uggs with jean skirts, anyone?) — but it was also a time when high school teen movies were all the rage and being produced in spades. Obviously there are still teen movies, but the early 2000s brought us some of the best ones, including Bring It On, Whatever It Takes, The Princess Diaries and Save The Last Dance. I mean, life couldn't get any better than that. These movies were crucial to the teen girls’ slumber parties of the time, and you weren’t cool unless you watched Bring It On at sleepovers.

In honor of our favorite cheerleading movie, here are seven things that will only be understood by girls who watched Bring It On at sleepovers.

1. The Importance Of The Spirit Stick

Yes, you made a faux spirit stick and if someone at your party dropped that bad boy you made them feel like they would be cursed forever. Sounds mean, but no one ever dropped the spirit stick. It was like the number one rule!

It doesn't matter what you were doing, when Sparky Polastri encouraged and taught everyone how to correctly hold their spirit fingers, you did the spirit fingers, and you nailed it.

3. You Knew This Cheer

“I’m sexy, I’m cute, I’m popular to boot…” Knowing this cheer was mandatory at sleepovers. It proved you had spirit... and that you'd seen the film at least 10 times.

4. Everyone Fought Over Who Was Missy

Torrance was cool, yeah, but Missy was all the rage. She was a total badass and if you were handing out movie roles during your sleepover, everyone wanted to be Missy because she had serious cheer moves and attitude to boot.

Ugh, remember how adorable Cliff was? That movie became hope that friends everywhere had hot brothers you could crush on.

There was always one girl in your sleepover that was a total Big Red. She was the worst.

7. You Practiced The Cheer Off

Yes, you definitely learned the cheer off and acted it out. It wasn’t a sleepover without the cheer off. This also included the “Brr! It's cold in here," routine.