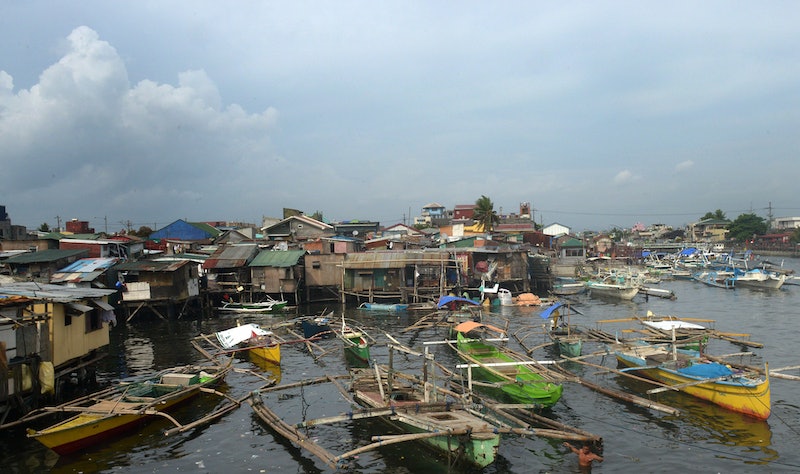 Southeast Asia was host to a dramatic natural disaster on Saturday, one that's had a dire impact on thousands of people: Typhoon Goni hit the Phillipines, killing 10 people at least, and displacing thousands more. According to The Independent, heavy rainfall and landslides caused flooding in the Abra province of the islands, and it's clearly taken a harrowing toll — more than 5,000 people have been taken to shelters to ride out the hostile conditions.

According to The Weather Channel, about 1,000 people were evacuated before the typhoon hit, and that's good news, because there was also extensive property damage, with dozens of homes reportedly destroyed.

Although climate events like typhoons, downpours, and dry spells have been very much in the news lately, thanks to projections for a record-breaking El Niño season in 2015, there's no reason to think that played any kind of unusual role in Typhoon Goni's sweep through the islands. In reality, El Niño is expected to contribute to challengingly dry conditions for the Philippines this year, which could have a very negative impact on food production. Wild, destructive weather conditions aren't that unusual for the Philippines, sad to say — it was also hit by major typhoons in 2014 and 2013.

As Mashable details, Typhoon Goni isn't entirely a negative for the Philippines, even though the human cost of its arrival is very tragic. The Philippines have been combating drought conditions, and even though typhoons are violent and unpredictable forces of nature, the promise of some rainfall is still important.

It's a similar consideration to what Puerto Rico faces with Hurricane Danny rolling in. It's also being felt within the United States, where the winter El Niño months are expected to bring flooding downpours to bone-dry California, which has been locked in the worst drought in its recorded history for years now — the state needs the water, even though the potential costs a flood-ridden winter could be high. For all the damage a climactic weather event can cause, going for months or years without enough water has a tangible cost, too.

Mercifully, this latest typhoon wasn't as devastating as what the people of the Philippines faced in late 2013, when Super Typhoon Haiyan struck. That was one of the worst disasters in the history of the island nation, leaving 6,000 people dead. The 2014 typhoon, Hagupit, only killed dozens by comparison