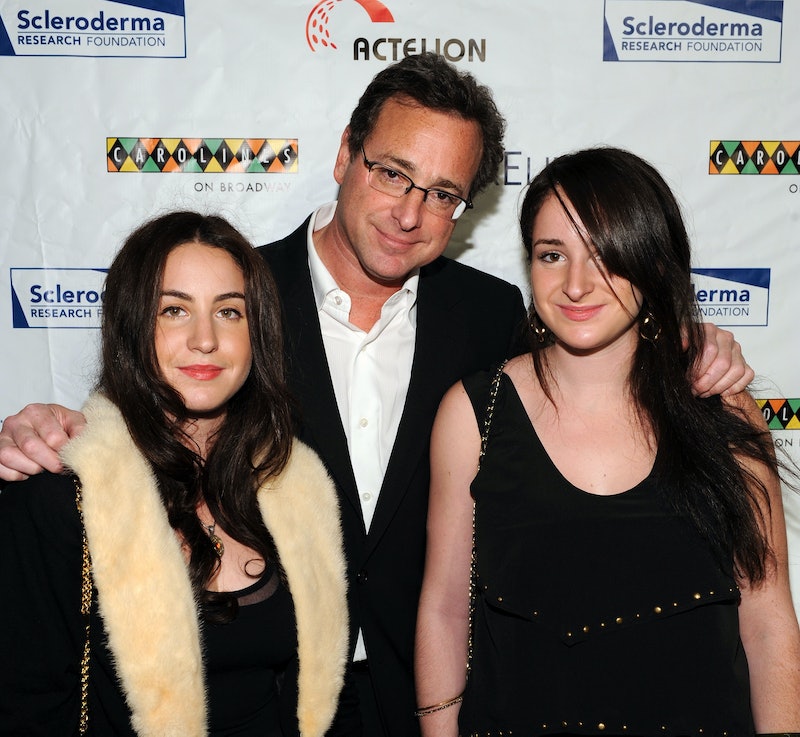 In The Unauthorized Full House Story, viewers got an up close look at Bob Saget's off-screen family, which, funnily enough, also contains three daughters like Danny Tanner's did on Full House. So, who are Bob Saget's kids in real life? DJ, Stephanie, and Michelle weren't the only young women that the comedian parented. His biological daughters Aubrey, Jennifer Belle, and Lara Melanie were there when the cameras weren't rolling. So, now, decades later, what's up with Bob Saget's family?

Bob Saget and his ex-wife, Sherri Kramer Saget, had three children together before their divorce. According to USA Today they would now be 28, 25, and 22. This makes them much younger than his on-screen kids. Candace Cameron Bure (DJ) is now 39, Jodie Sweetin (Stephanie) is 33, and the Olsen twins (Michelle) are 29 now. (Ahhhhh, I know!) In theory, Saget's fictional daughters must have been terrific role models for his real-life daughters.

But, beyond the number of daughters, Saget's fictional life didn't bleed much into his home life. He told Access Hollywood that he "forbid" his daughters to watch the show that made him a household name. "It was a kids’ show. It was a lovely, family kids’ show, but I’d done it all day," he said. "Would you go home and watch a kids’ show after you did it all morning?"

Now that Saget is out of the family television game and back in the stand-up world that got him the job in the first place, his daughters are no longer forbidden from seeing his work. An Esquire journalist recently sat in on one of Saget's sets that Aubrey and Lara both attended. Saget's material is famously blue, and the antithesis to his wholesome TV persona. Still, Aubrey and Lara aren't phased by his jokes. "Saget's daughters have long since been immunized to their dad making them feel uncomfortable. It would just be too exhausting," the Esquire writer said.

The comedian's daughters are flying relatively under the radar. Aubrey is the most visible, with an online gallery that showcases her paintings of everyday objects like refrigerator doors and an half-eaten slice of pizza on a paper plate. But, all of his daughters have been involved in their father's extended famous family, even attending Dave Coulier's wedding. And, their real claim to fame is being their actor dad's greatest accomplishment. Bob Saget describes his three girls as "the best thing I’ve done, the highest thing in my whole life." Not bad for the less famous of the comedian's two families.