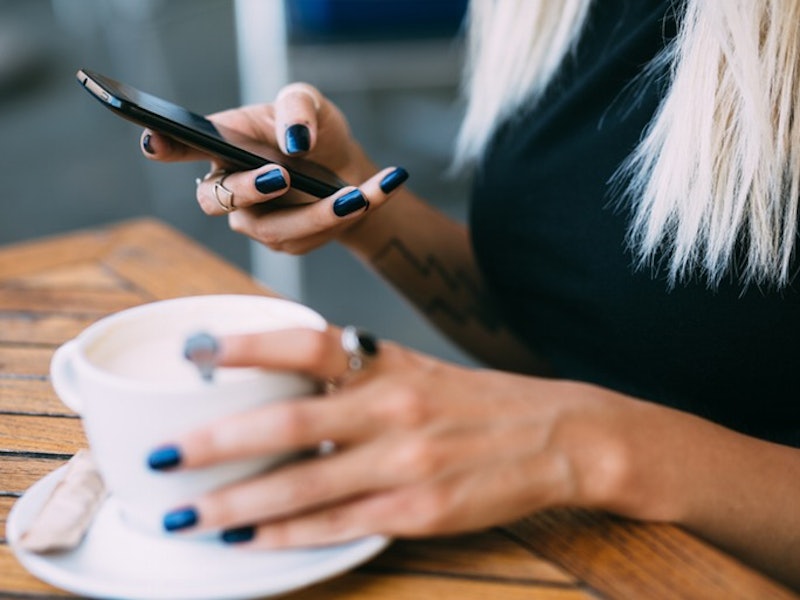 Like many people, one of the first things I do in the morning is check my various social media accounts. In plenty of ways, it's actually a positive thing for me — I don't want to forget the birthday of an old friend, and since I live across the country from most of my family and close friends, I love being able to see what they're up to in between our phone dates. Still, I'd be lying if I said I didn't pay close attention to how many followers I've gained or lost on Twitter, or how many "likes" my latest Instagram photo received. And, really, there are way more important things I should be thinking about.

I've considered deactivating my accounts at different times, but for personal and professional reasons, it's never been the best choice — and I'm sure many others are in the same boat. Lots of us have friends and family all over the country and world, and social media is a great way to stay updated while we're playing phone tag. So, how can we keep our social media habits healthy?

For starters, we should limit the amount of time we spend on social media platforms and be clear about our reasons for logging in each day. Using Facebook and Instagram to keep in touch with friends and family is different than spending hours scrolling through our newsfeed and lamenting the fact that people we haven't seen since 12th grade seem to be killing it at life.

Still, it's totally possible to be a social media user without compromising our self-confidence, productivity, and sanity. Here are five ways to maintain your social media presence and keep the unhealthy side effects to a minimum.

Have you ever casually logged onto social media for "just a few minutes" only to glance up and realize that an hour has passed and you're looking at the vacation photos of a friend of a friend? Set a limit for the amount of time you'll spend on social media each day and hold yourself to it — no excuses! If you need further motivation, make a list of all the things you could be doing instead of scrolling through Instagram or Twitter.

Do you often find yourself saying you wish you had more time to read, go to the gym, or talk on the phone with long distance friends? Replace some of your social media time with those activities — they're healthier, more productive, and will leave you feeling better about yourself at the end of the day.

2. Remember That People Tend To Share The Best Aspects Of Their Lives

If you've just been rejected by a crush, passed over for a job promotion, or had a huge fight with a friend or family member, the last thing in the world you're probably going to do is post a sad selfie to Instagram or update your Facebook status to let all your high school classmates know that you're having a rough day. But when you land your dream job, make an exciting move to a new city, or have a fun night out where you just happen to look photogenic, you're much more likely to share.

So keep in mind that all your social media connections are doing the same thing. Everyone is presenting a very carefully constructed image of their life and they're showing you the highs — not the lows.

I work from home and my job requires me to be on the Internet throughout the day. Needless to say, it's tempting to keep my Facebook and Twitter pages open on different tabs — just in case I get a super important notification about a new "like" or "follow" (although, honestly, it's more often an invitation to play Farmville ... and my answer will always be no!). I know plenty of people who work from an office and do the same thing.

Not only does this negatively affect productivity, but it also means we're plugged into social media way more often than we should be. Even if we are mostly focusing on our work, we're still eyeing that other tab for new notifications. So when you're at work, keep social media websites off limits. You'll be able to focus on the tasks at hand without the distraction of clicking back and forth whenever you see a notification.

4. Keep The Phone Apps To A Minimum

No, you don't have to install the Facebook and Twitter apps to your smartphone. Since it's possible to keep Facebook messenger on your phone and uninstall Facebook itself, I recommend doing that. You won't miss any important messages, but it will eliminate the temptation to scroll through your newsfeed while you're on public transportation or waiting to meet up with a friend who's running late. If you do have downtime while you're waiting for a friend, give a family member a quick call or run an errand.

5. Put Your Phone Away When You're At Work Or With Friends

It's become the norm to see everyone's phones on their desks during the workday and on the table during a dinner or drinks gathering. Unless you're expecting a super important text or phone call, challenge yourself to stow your phone in your purse while you're working and socializing. Most texts and phone calls don't need to be answered right away, and it's so easy to get distracted by Facebook, Instagram, and Twitter notifications.

And therein lies the irony of social media — after we take a cute picture with friends, it's all too common to stare at our phones waiting to see how many Instagram likes it gets when we should actually be, you know, socializing in-person with our pals.