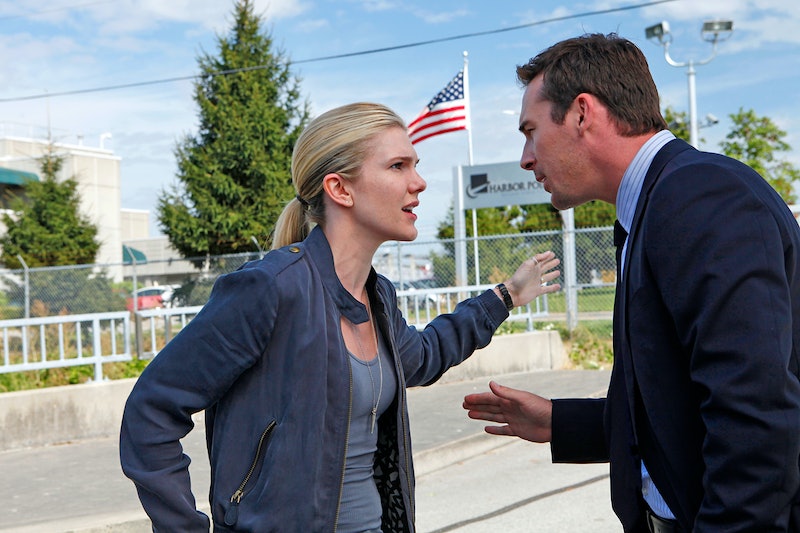 There are only two episodes left before The Whispers Season 1 finale airs, and although ABC has not yet made a final decision regarding cancellation or renewal, Seriable reports that ratings for the Aug. 17 episode were the lowest of the season. Combine that with the fact that, according to Deadline, cast options expired at the end of June, and things are not looking good for fans of the awesomely creepy mystery. I'm currently wallowing in some serious self-pity that one of my favorite new series may not return — but things are looking considerably bleaker for the major players on the show. Out of everyone, I'd say Wes wins the prize for "worst week ever". First, Drill killed his wife and now it appears that Minx's body has been chosen as the host for the alien villain. So, what the heck happens next?

Unsurprisingly, the latest fan theories focus mainly on who Drill has truly chosen as a host. Although theories diverge, most fans agree that Minx seems a little too obvious and convenient. And, even though we just saw the death of a major character, that doesn't mean another player won't die before the season's end — except this time, it seems likely the fatality will be directly related to a potential host. Here's a roundup of fan theories that cover the child (or children) Drill is targeting and the person who may sacrifice himself to save the human race.

1. Drill Will Use The First Daughter As A Host

Although Drill has definitely favored Minx throughout the season and last week's episode indicated that he'd chosen her as his host, Reddit fans are saying "not so fast". User GooglePlex9000 suggests that, instead, Drill will inhabit the body of Cassandra, the First Daughter. It would be a smart move on Drill's part, because it's the perfect way to gain access to the words and movements of the country's leader. Minx's actions definitely indicate something is amiss, but that doesn't mean she's been chosen as the host. We know that Drill has control over her, and he could be using Minx as a distraction so the FBI agents think they've identified the chosen child. Furthermore, he's probably manipulating all the quarantined kids to point the finger at Minx while he gets to work possessing the body of his actual target. It's worth noting that all the children except Henry pointed at Minx as Episode 11 concluded. It's probably not a coincidence that earlier in the same episode, he promised Claire that he wouldn't listen to Drill.

Although most armchair detectives agree that Minx isn't the host, a number of fans have suggested that Drill is capable of inhabiting more than one body at once. Facebook fan Leu Seijas suggests that Drill is now inside the bodies of multiple children. He split himself up into tiny pieces and now inhabits the bodies of many, if not all, of the quarantined children. This would explain why the kids all started to feel better once they were together.

We've already had one major character death this season, but that doesn't mean another isn't imminent — especially since, even if Season 2 does happen, they're going to need to start over with a mostly new cast. And, if Season 2 of True Detective has taught us anything, it's that multiple character deaths are likely when there's about to be major cast turnover. Sean's definitely at risk because, like Lena, he's an adult who had some sort of contact with Drill. But I think it's more likely that he will voluntarily sacrifice himself in order to save a host child (or host children, if the previous theory proves to be correct) and potentially save the human race. Facebook fan Lori Parry points out that since Sean was possessed once, he can probably figure out a way to get Drill to inhabit his body again.

It would be heartbreaking, but Sean may voluntarily offer himself up as a host and die The Whispers' hero.

More like this
These 'This Is Us' Finale Theories Will Make You Weep
By Brad Witter
'The Wilds' Has A Major Cliffhanger To Resolve In A Potential Season 3
By Brad Witter
Will ‘Moon Knight’ Return For Season 2? There Have Been Promising Signs
By Kadin Burnett
All The Theories About Kathleen Peterson’s Death
By Morgan Leigh Davies
Get Even More From Bustle — Sign Up For The Newsletter