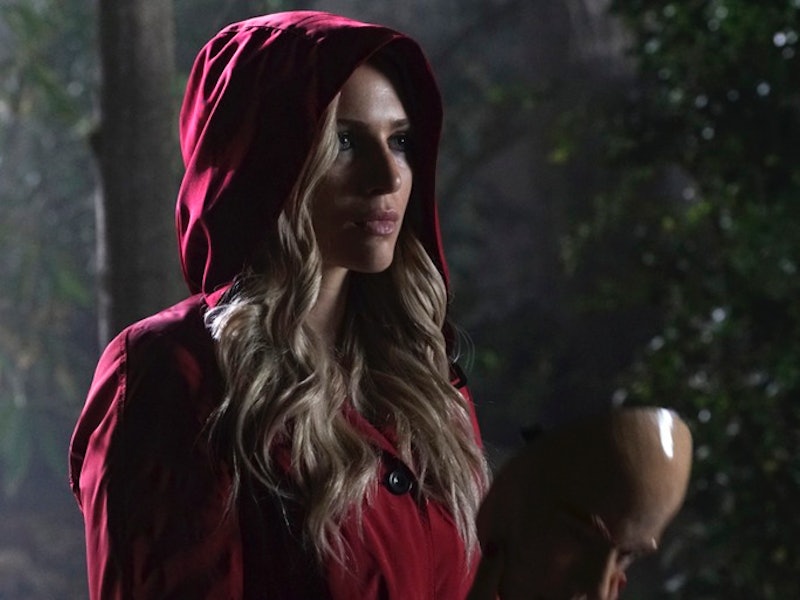 After that trainwreck of a Pretty Little Liars Season 6A finale, many fans have focused on the major reveal that A is none other than CeCe Drake. But let's take a moment to talk about the other huge reveal: Sara Harvey is Red Coat and Black Widow. Yes, Sara, the character we met approximately 10 minutes ago, has apparently been running around for the past three seasons doing CeCe's bidding because.... well, we weren't really given any hint as to what her motivation could have possibly been — and at this point I'm fairly confident that I. Marlene King doesn't have a good answer to that question, either. So she better start thinking up a darn good one, because fans of Pretty Little Liars have many unanswered questions about Red Coat.

Ordinarily, I'd have more patience. After all, the reason I've been such a huge fan of Pretty Little Liars since the day it premiered is because I love watching a complex mystery, forming my own theories, and prowling the web to read fellow fan theories and clues I may have missed. And typically, I don't hate cliffhangers — even if they do sometimes leave me shouting at my TV screen. But this Red Coat business wasn't even left as a cliffhanger. We're apparently supposed to just accept the nonsensical reveal that Sara Harvey has been under the coat all along and move on.

Five years in the future, there's an unidentified "he" after Ali, who appears to be the focus of Season 6B. That's fine and all, but before the show even begins to delve into that mystery, they need to give us the answers to these Red Coat questions.

1. What Is Sara's Connection To CeCe?

Seriously, under what circumstances did these two meet and how did they end up conspiring to terrorize Aria, Emily, Hanna, and Spencer? All we were told in the finale is that CeCe "hired" Sara to help her. What did she do, place an ad in the classifieds of the local paper?

2. How Is Red Coat CeCe's Only Accomplice?

Although theorizers have suggested for a long time that Red Coat and Black Widow are the same person, it just doesn't seem possible, even by Pretty Little Liars standards, that CeCe and Sara would be able execute so many complex acts of cruelty on their own.

3. Why Is Red Coat Someone We Literally Just Met?

The PLL writers have repeatedly asserted that they carefully constructed these "answers" and "reveals" three years ago and everything since then was leading up to the 6A finale. So why couldn't Red Coat have been a character who had at least some screen time prior to the Season 6 premiere? And, no, I don't think the missing person website with Sara Harvey's face that was shown for a hot second in Season 4 counts.

4. Why Did CeCe Keep Wearing The Red Coat After She Took Over The A Game?

We learned in the finale that CeCe took over the A game while Mona was in Radley. But we also know that she continued to wear the Red Coat disguise even after she became "Big A." Her face is clearly shown in the Season 4, Episode 12 sawmill scene — and she's dressed as Red Coat.

5. Did CeCe Act As Both Big A & Red Coat Until She Hired Sara?

If Sara truly was Red Coat in Season 4, then why didn't CeCe send her to the sawmill instead of donning the disguise herself? The only reason I can think of is that she hadn't yet "hired" Sara. If that's the case, are we supposed to believe that she actually managed to execute the A game with no helpers for an extended period of time?

6. But Seriously, Why Couldn't A & Red Coat Have Been Wren & Melissa?

I'm not just saying this because I'm bitter that neither of my theories panned out (although I'm not going to lie and say I enjoy being wrong). It just would have made so much more sense! And at least Wren and Melissa were both, you know, characters who actually had substantial screen time and motive throughout the series — not just for the past 10 episodes. The Summer of Answers may be over, but I. Marlene King, you still have of a lot of explaining to do.

For more on the many questions fans were left with after the Season 6 summer finale, check out Bustle's PLL podcast, Taking This One To The Grave, below.