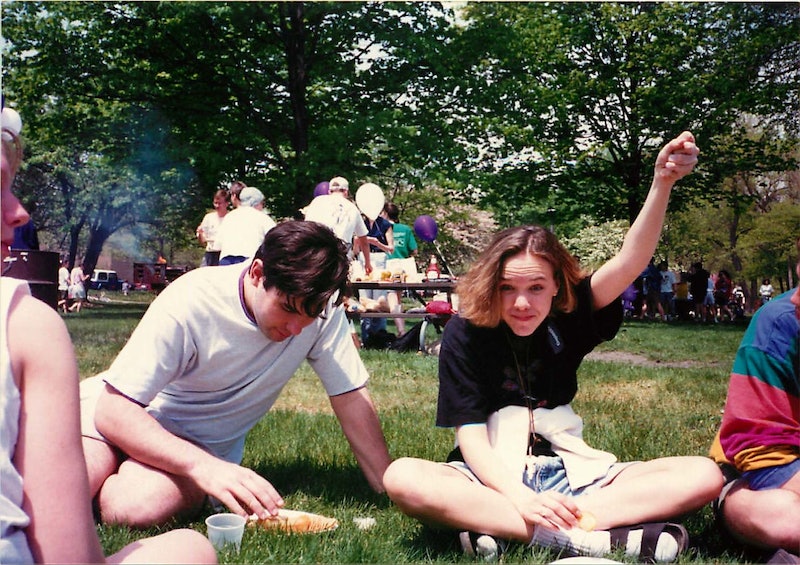 Whether you're heading off to college as summer grinds to a halt, or making your way back into the workplace after a much-needed vacation, fall is a time for new beginnings and second chances. Of course, along with freedom and possibility, new beginnings and second chances often harbor a subtle pressure to fit in. Of course, there's nothing wrong with blending in to a crowd (particularly if you're looking forward to an exciting career in international espionage or trying to avoid an ex), but when the urge to fit in crowds out your own true self, that's no good at all.

To quote the late, great Dr. Seuss — an inveterate master of individualism — "You are you. Now isn't that pleasant?" After all, no matter how many times you re-invent yourself by changing up your look, taking on new interests, or slipping into a different social group, your true self will always shine on through. In the face of oncoming pressure to fit right in, celebrate the beauty and the power of staying true to yourself with these nine books. Because, at the end of the day, there's far more fun to be had by standing out than blending in.

Anne of Green Gables arrived on Prince Edward Island unloved and unwanted by the hardworking brother and sister who had sent for a boy. Rather than buckling down and trying to make her way as a substitute son, Anne stayed true to herself, letting her freak flag fly (to the occasional embarrassment of Aunt Marilla) and finding love, acceptance, and success as herself. So, for all those times when you feel unwanted and unloved, let Anne be your guide, and don't be afraid to go it your own way.

When the forces of civilization imposed themselves on Huckleberry Finn, did he bend to the will of others and succumb to conformity? Certainly not! Mark Twain's most infamous adolescent hero escapes convention time and time again, heading off the beaten path to make his way in the world as he sees fit. Although I'm certainly not advocating a life on the run as an alternative to integration, The Adventures of Huckleberry Finn offer a compelling illustration of the road less travelled by for everyone whose lifestyle choices don't play well with others.

In a world where every family is limited to two children, Ender Wiggin is a third — unusual by rite of birth, and isolated through careful training on a military spaceship for gifted students. Although Ender's gifts separate him from the crowd and render him a target, those same unique abilities prove to be not only empowering but also transformative throughout this beloved sci-fi series. If there should come a day when your freckles get you down and your passionate addiction to Greek food feels out of place amidst a crowd of sushi-lovers, spend some time with Ender and remember that, at the moment of truth, your unique gifts may make the difference.

The Hobbit by J.R.R. Tolkien

A classic tale of finding uncommon spirit and bravery where you least expect it, this astonishing tale of adventure may be just what you need to set you on your true path, even if it means walking away from the safety of a secure identity. After all, if Bilbo can break free of the shire to seek out adventure amongst goblins and wizards, surely you can find a crowd that accepts you and a life worth living, even if that means enduring a few snide looks every time you return home.

Albert Camus' astonishing and insightful allegorical tale highlights the troubles that can befall an individual in search of an "absurd freedom" in the modern age. Although Camus' protagonist certainly makes some questionable choices, the prose and passion of this quixotic work of fiction serve as the perfect reminder that living outside the boundaries of conventional society can offer its own uncommon rewards.

Chronic City is a strange saga populated by underdogs, outsiders, and anti-heroes. Set in a speculative city of the future, Lethem offers up a brilliant tale of life on the margins that underlines just how extraordinary a life out of the ordinary can truly be. If ever you should find yourself questioning your place in the world as an outsider, a few long nights with Chronic City should be enough to change your mind.

Sometimes celebrating your true self is simply a matter of find a place in the world when you've been rejected time and time again. In simple, aching prose as open as the plains, Kent Haruf explores the lives of three loners looking for a way to belong together in this triumphant celebration of love and belonging. When acceptance seems a good way off and living alone is getting you down, spend some time with Plainsong and remember that there is a family out there for all of us just waiting with open arms.

Franny and Zooey by J.D. Salinger

Franny and Zooey are the quintessential oddballs, struggling to muddle through a world that doesn't seem to quite make sense. Touching on the tenants of Eastern Philosophy, Catholic tradition, and family dynamics, Franny and Zooey treats feeling alone with all the tender delicacy of high art, offering solace and some small measure of wisdom to every lost soul out there just looking for a way to find herself.

David Foster Wallace's semi-autobiographical epic, The Pale King, follows the lives of workers at The IRS Regional Examination Center in Peoria, Illinois through every second of stultifying boredom at one of the most widely despised jobs in all of America. Peopled by oddballs and outsiders quivering with quirks beyond measure, The Pale King finds meaning and magic in the strange idiosyncrasies that make us who we are, reminding readers that more often than not it is our eccentricities that make us who we are.