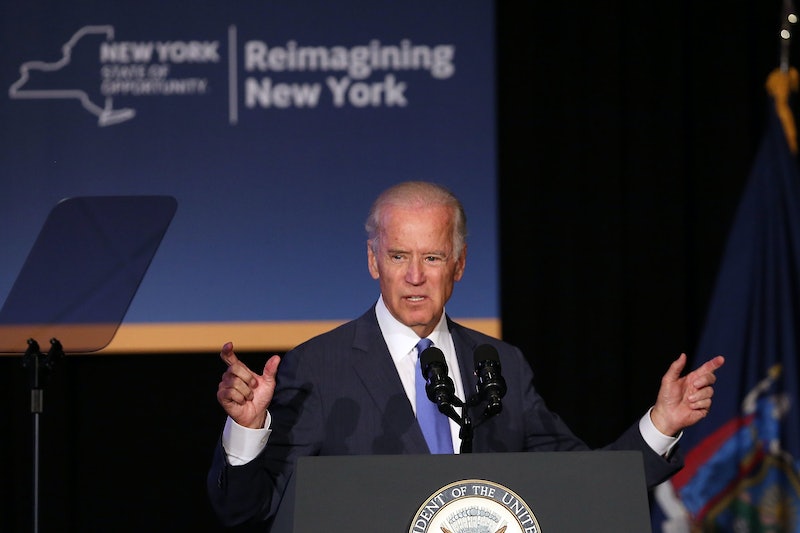 Vice President Joe Biden has dropped a number of hints that he might be considering a 2016 presidential run. Most recently, Biden met with Sen. Elizabeth Warren, a Democrat from Massachusetts, to discuss economic policy, a source told CNN. Thousands of people called on Warren to start her own campaign, but she officially shut down the pushes in April. Now, some people believe she could be the running mate to one of the candidates, and her two-hour meeting with Biden has only added fuel to rumors that Biden could be running and that Warren could still join in as a potential vice president.

CNN said the meeting is the strongest indication yet that Biden is "feeling out influential Democrats" before officially confirming or denying the rumors about his 2016 run. The source that informed CNN of the meeting said Biden's future was not "a particular focus" of his meeting with Warren. Even more mysterious, the meeting wasn't on Biden's official schedule, which said he was spending the weekend at home in Delaware. A small team of advisers have also quietly been putting together a campaign strategy and fundraising plan in case Biden decides to run, according to CNN.

This isn't the first hint Biden has dropped that he might run in the 2016 race. In early August, reports surfaced that Beau, Biden's late son, requested that his father run for president just before he died of a recurrence from brain cancer. Though the source of the rumor was never officially confirmed, that kind of request would be quite a weighty one. In February, Biden also dropped a number of hints that he was still seriously considering a run when he told CNN "there's no reason" for him not to run.

Leaders in the Democratic party have started to get nervous recently amidst concerns that Hillary Clinton could lose in Iowa and New Hampshire, where Sen. Bernie Sanders has drawn huge, supportive crowds, according to The New York Times. Sanders' message has been described as socialist and populist, so it isn't exactly what the party is looking for. In its search to find someone else, the party has landed recently on Biden. In a July poll, voters said Biden cared about their needs and was more trustworthy than Clinton, whose transparency and honesty has been hurt by the investigation surrounding emails she sent on her private account while she was secretary of state.

Biden has one more meeting scheduled this week with his small team of advisers in Wilmington, Delaware, and is expected to announce his decision in the next month, according to CNN.

More like this
How To Fight For Reproductive Rights, Based On How Much Time You Have
By Courtney Young
Celebrities & President Biden Are Enraged By The Leaked Roe v. Wade Decision
By Alyssa Lapid
President Zelensky Spoke Out On Ukraine's Chances Of Hosting Eurovision Next Year
By Sam Ramsden
The Music Industry Continues To Fail Black Women
By Precious Adesina
Get Even More From Bustle — Sign Up For The Newsletter