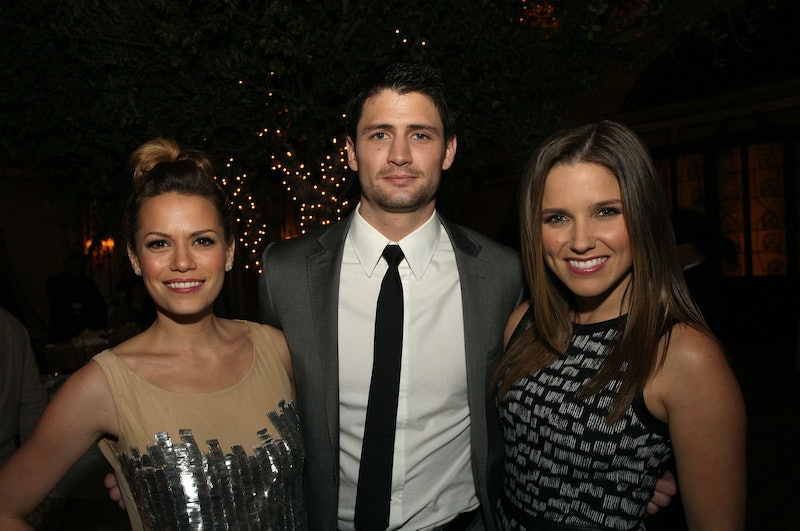 What's better than spotting an unexpected One Tree Hill reunion on your Instagram feed as you sip some champagne? Basically nothing, friends. That's as good as it gets. If you don't follow Sophia Bush on the social media app, you should, because the actress is often the facilitator of nostalgic, heartwarming posts, such as the multiple One Tree Hill cast hangout pics she put up on Saturday night.

The great thing about the beloved cast is that, while they reunite a considerable amount, each time feels as exciting and new as the last. Why? Well, because despite the fact that the show is now a whopping 12 years old, it's so clear that they care about each other as much as they did when they were young and virtually unknown.

Of course, there was also lots of love to be had among their characters, in spite of all the drama on-screen. But for all of the fighting, significant-other-stealing, and basketball sibling rivalries, OTH reeled us in because of the relationships, whether they were romantic, familial, or platonic. And these semi-frequent cast reunions only serve to remind us that all of the love we experienced on OTH wasn't fictional.

Here are eight pics that prove the love between the One Tree Hill cast was (and is) so real.

3. In Fact, The In-Law Love Appears To Be Even Stronger Off-Screen

That is, if you believe Dan Scott was actually capable of love.

4. Brooke And Peyton, Sophia And Hilarie ... Is There Really Any Difference?

5. They Are Actually Always This Genuinely Happy To See Each Other

I can't. I simply cannot.

6. You Know You're A Real Squad When You Always Fall Into The Same Formation

It's almost too perfect.

7. The Show Really Knew How To Foreshadow

8. Even The Quiet Moments Spoke Volumes

But perhaps that sentimental caption speaks even louder. Ugh, you guys.

Keep blurring those beautiful lines of love, OTH cast. You're giving us nostalgic fans a reason to go on.