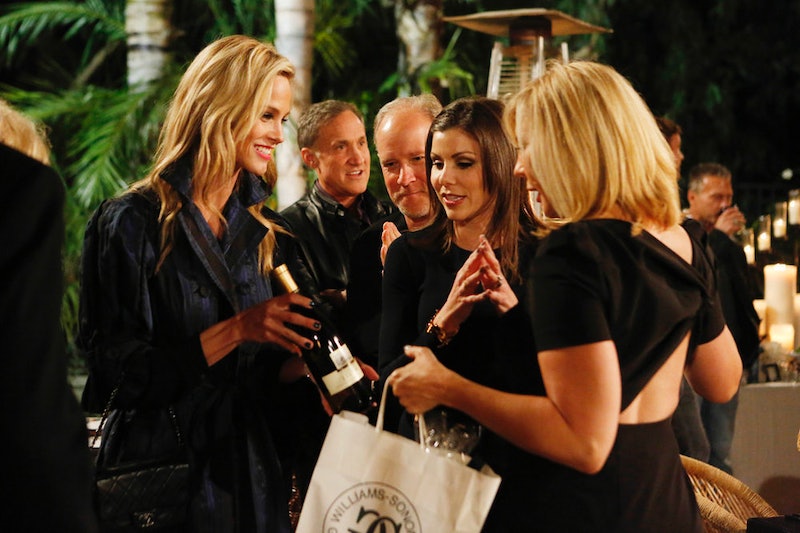 Over the past 10 seasons of Real Housewives of Orange County there have been dozens of horrible moments between the ladies and the people in their lives. From bratty kids and terrible boyfriends to wine throwing and weave snatching, these women have shown the audience it all. So, if Brooks Ayers is lying about his cancer diagnosis like Tamra's psychic says, would it even be the worst thing that has ever happened on the show? The 47-year-old is maintaining he does have cancer, and Vicki has backed him up on that, It would be pretty bad if he's making up an illness, but Brooks has some seriously stiff competition with all of the messed up things that Bravo's cameras have captured over the past decade.

Season 10 of Real Housewives of Orange County has had its fair share of memorable moments, but in order to really see how bad this group can be, it really helps to look at the entire series. Each and every person who's been on RHOC has had at least some bad moments. In all of the petty squabbles, lies, and deceptions that have happened over the course of the show, it's just a question of where Brooks' alleged lie would fall on the scale. And, while it's pretty bad to allegedly fake cancer, there may be a thing or two that knocks him out of the top spot.

When Sarah, Alexis Bellino's inebriated plus-one, went for a taste of icing from the cake at Heather Dubrow's "naming party" in Season 7, she had to know there'd be consequences. Those consequences included a brief fifteen seconds of fame, and extinguished that last wisp of fun left in Heather Dubrow.

Also a key moment at the end of Season 7, the introduction to Brooks Ayers where Vicki and Tamra got into a huge fight over some supposed evil eye throwing, and Vicki's furious reaction, ruined their friendship. Sisters before misters, ladies. Whatever happened to that? It was hard to watch a guy come between these two, and if Tamra had just kept her eye to herself, it could have all been different.

Tamra and Vicki switched from being close friends to bitter enemies with each season. But on one of those down periods, during the 2012 reunion, Tamra decided to mock Vicki for dating and supposedly hooking up with "twelve guys," and, in the 2013 reunion attacked Gretchen in a similar way. At least during the reunions, Tamra does not believe in girl code, you guys.

Alexis would faint at this example of "boolying." Because during Vicki's housewarming party in Season 8, Lydia's poor mother may have been putting her feet up at the coffee table, but she didn't need to be harangued about it angrily by a serviceman, especially Ryan Culberson, Vicki's son in law.

The one Season 10 moment that absolutely makes the list, the cast's doubts and attacks about Brooks cancer, and claiming that he's allegedly lying. I can't blame this on just Meghan, even though it's her quote up there. This is also on Tamra and her psychic. I know Brooks isn't very trustworthy, but when someone brings up cancer, most people take that as a cue to be kind, not attack.

It is also my favorite moment in the entire series, but this Season 4 fight between the old queen bee, Jeanna, and the newbie, Tamra, was dark. Wine was thrown, divorce was thrown out as a pejorative, gif legend was born, and it was the first time Tamra realized being an instigator would make her famous.

If this turns out to be a lie, it should rank pretty highly on the list of RHOC offenses, but I cannot, in good conscience, place it in the number one or number two spot... that's just how rotten some of the things that have happened on RHOC are. If Brooks is allegedly lying, it makes him a crappy boyfriend, but not the worst offender in the show's history.

2. Everything Slade Smiley Ever Did

From Seasons 1 through 8, Slade was the worst guy on the show. He strung along Jo, Lauri, and until accepting her proposal in their final season, Gretchen. He was cruel to Lydia, making disparaging comments about her looks. He did the same thing to Vicki, under the guise that he was performing stand up comedy. He's no longer on RHOC, but the memory of Slade lives on.

In 2013, Ryan Culberson leaked a tape of him allegedly speaking to Brooks about Vicki and his beliefs about relationships. It's a disgusting conversation, and permanently tainted Brooks' relationship with Vicki — they broke up in the same year. There are a lot of awful things on Real Housewives of Orange County and there's not much that's worse than Brooks allegedly faking cancer, but this has got to be the worst. It came up on the Season 8 reunion, and really made Brooks' bad side obvious.

So, even though Brooks may not be the unambiguous supervillain that Tamra wants to paint him as, he already has a terrible history on the show. So, the lack of trust in Brooks may not be polite, but it's more than warranted.