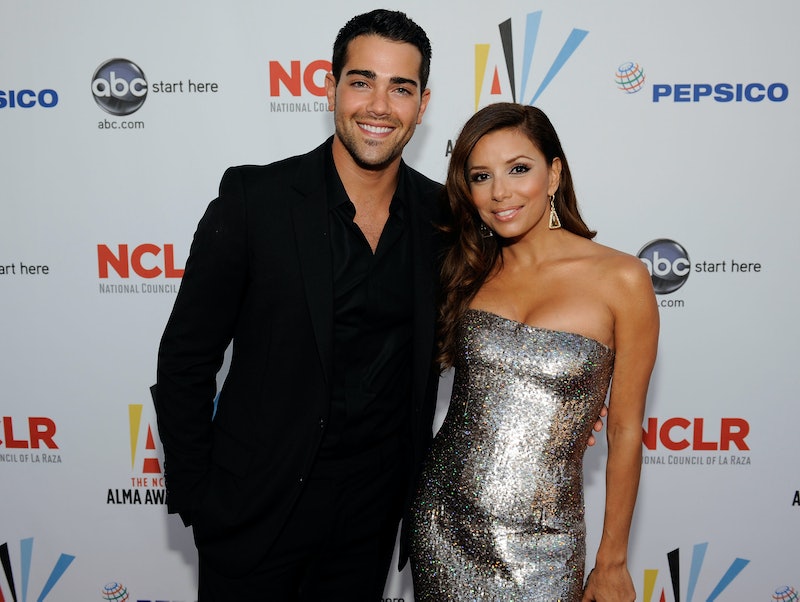 A celebrity reunion took place on Saturday, Aug. 22 that I desperately wish I had been a part of. While hosting a charity event in Los Angeles, actress Eva Longoria ran into Jesse Metcalfe, her former Desperate Housewives co-star. The reunion was captured in a photo Longoria posted to her Instagram account, with the caption: "Look who I ran into today! My favorite gardener!!!! #DesperateHousewives #OneOfMyFavPeople." I don't know about you, but the post has me somersaulting headfirst into early 2000s nostalgia.

Back in 2004, there were few shows that served as a greater guilty pleasure than Desperate Housewives — and the storyline between Longoria and Metcalfe's characters was arguably the most scintillating. Longoria played firecracker Gabrielle Sollis, who — following an argument with her husband, Carlos — decided that the best way to alleviate her stresses was to commence a steamy affair with her dashing young gardener (Metcalfe). From there, the two engaged in a salacious, borderline NSFW affair that ended up going unsurprisingly awry. While Gabrielle viewed John as a fling, the young gardener became completely infatuated with the rich housewife, leading to proclamations of love and an episode of fisticuffs with Carlos. Television doesn't get much more addictive than that — amiright??

For the love of escapism, let's take a look back at this iconic storyline.

Oh, so illicit! During Season 1, Gabrielle decided to ameliorate her frustrations toward Carlo by sleeping with John. This pivotal scene also offered our first insights into John's doe-eyed love for Gabrielle.

And now I'm having flashbacks to how awkward this scene was to watch with my family present. It was this moment that I decided to relegate any Desperate Housewives viewings to my bedroom.

As scintillating as the storyline was, Gabrielle and John's relationship turned into a bonafide cautionary tale. John became increasingly obsessed with Gabrielle, and he eventually told Carlos about the affair. This scene also led to my favorite quote of the series: "Didn't you think it was strange that you had the only lawn on Wisteria Lane that needed to be mowed three times a week?" Touché.

Flash-forward a few seasons, and John ended up in an unhappy marriage that was marked by his undying feelings for Gabrielle. Just when Gabrielle and Carlos had reconciled, John attempted to reignite an affair with Gaby while Carlos hid in a closet. This may be the most awkward moment in the entire series. Love. It.

John didn't return to the fold after Season 6, but his storyline with Gabrielle remains one of the most memorable of the series, IMHO. It's nice to see that John and Gabrielle's portrayers remain close — minus all the sudsy drama we saw onscreen.