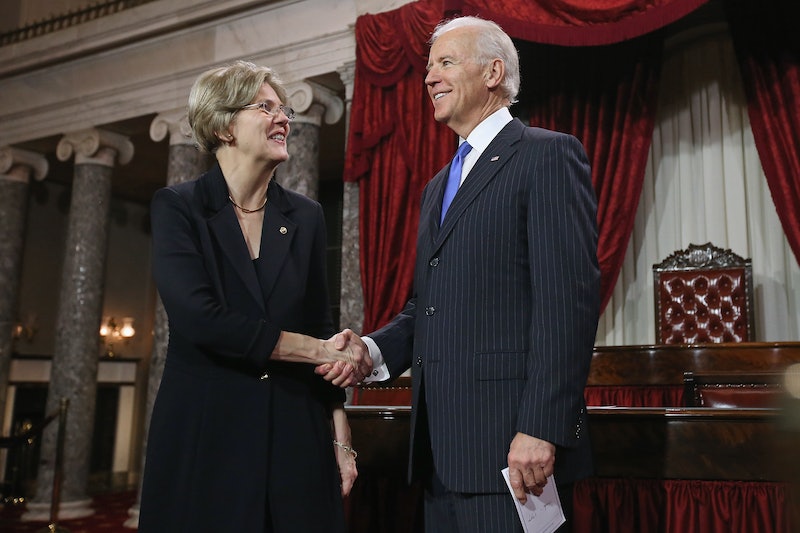 With all of Washington, D.C. buzzing about Vice President Joe Biden's will-he-or-won't-he possible run for the presidency, now comes the added speculation about Biden's meeting with Sen. Elizabeth Warren, with many wondering whether a Biden-Warren ticket could come to pass. It also raises the question of whether this scenario was the reason for Warren's adamant refusal to mount her own presidential campaign: Did she plan all along to be part of a possible Biden presidency?

CNN reported on Saturday that Biden and Warren recently met privately and talked about economic policy. A source told CNN that the discussion lasted two hours and the presidential campaign "was not a particular focus of the discussion." That would seem to leave open the possibility that the topic of Biden's campaign plans at least came up during the meeting, however.

Warren was the subject of intense speculation earlier this year, as some liberal Democrats urged her to make her own bid for the White House. She put an official end to all the discussion in April, but it was never totally clear why she wouldn't at least test the waters. Warren is a heroic figure in the liberal wing of the Democratic party, for her impassioned criticism of Wall Street greed and policy proposals to implement stricter regulations on big banks.

But despite the formation of a super PAC called Run Warren Run that collected 365,000 signatures from would-be supporters, Warren wouldn't budge. The odds against a Biden campaign, even if he does run, are significant: Despite a growing challenge from Vermont Sen. Bernie Sanders, Hillary Clinton has raised $45 million in the first quarter of her campaign alone, has a well-organized staff and the support of top party leaders. For her part, Warren has yet to endorse any candidate, but did have a private meeting with Clinton in December, which fueled speculation that she might end up on an eventual Clinton ticket. That meeting was months before Clinton made her campaign official, but she was widely expected to run by that point.

However, the candidates who seem most ideologically aligned are Biden and Warren. Clinton has long been seen as a progressive, rather than liberal, Democrat, whereas both Biden and Warren are popular among the party's more left-leaning members. Biden spoke out in support of same-sex marriage before even the president did, cementing his status as a liberal rock star. Warren's catchphrase "the game is rigged" against working families helped create her image as a champion of ordinary Americans.

So, if she ends up on any ticket as the vice presidential nominee, it's much more likely to be Biden. But until the vice president officially makes up his mind one way or the other about whether he wants his boss' job, those who want to see Warren in the White House can keep hope alive: She might get there yet.