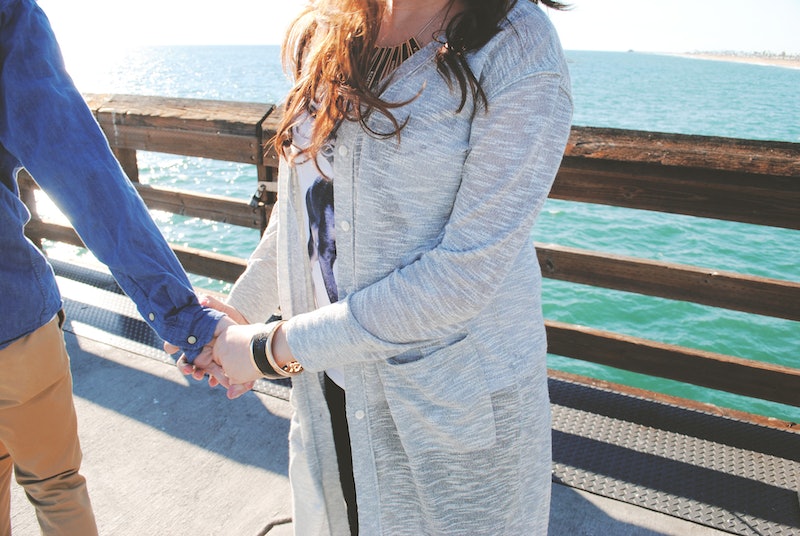 The grass is greener on the other side, or so we've been told — and it's just as green as that little monster we call jealousy. Jealousy seems to latch onto our self-esteem and cloud our better judgment. So it's natural to search for healthy ways to deal with jealousy. It's important to acknowledge that jealousy is a human trait we all share. Whether in a relationship or friendship, it happens and there’s no shame in it. It's a pretty primal response when we see something we want that we either don't have or something we have that we could lose to something else.

Actually, as social emotion researcher Richard Smith Ph.D. explains in Psychology Today, that's the difference between jealousy and envy. He says, "Envy occurs when we lack a desired attribute enjoyed by another. Jealousy occurs when something we already possess (usually a special relationship) is threatened by a third person."

Many of us tend to hyper-analyze the sh*t out of everything, form warped perceptions, and jump to drastic conclusions without taking the time to focus on the real root of the issue. Rather than combat these natural feelings, it's important to understand them so we can learn how to benefit positively. So when the little green monster comes charging at you in full-force, here are seven healthy ways to deal with jealousy.

Before you can even begin to tackle that green monster, you have to acknowledge that it's there, after all. When you notice that you're feeling jealous, take a moment, breathe slowly, and observe your thoughts and feelings, Robert L. Leahy told Psychology Today. In doing so, Leahy said it's especially important to recognize that jealous thoughts are not necessarily reality. Reflecting on how you're feeling in this way will allow you to think more clearly and tap into why that is and how you're going to address it. So say what's up and move on with the ways you're going to deal with it.

2. Use It As Motivation

So you've accepted that you're jealous. And it still feels pretty bad, doesn't it? Perhaps the most popularly doled-out advice to fight feelings of jealousy/envy is to stop comparing yourself to others. But we all know how hard it can be to put those blinders on. Instead, think about the positive changes you want to make, but most importantly — do it for you, not to one-up your neighbor. That'll just come back to bite you in the long run.

That being said, a little jealousy and envy could certainly help lead you to better things. These feelings can be channeled into some healthy motivation to push you past your boundaries. Dylan Williams, a productivity and purpose coach, gave the following advice on Lifehack: Learn from those who have made it, because if someone else was able to do it, that means it's possible. It's amazing to be in an environment surrounded by people who are constantly challenging and bettering themselves and it's great to have role models. The second you start chasing a dream or working toward something because it makes you happy, your worth just skyrocketed. Allow yourself to get out there and try new things, but pursue those goals honestly and realistically.

3. Look At The Big Picture

We can get so wrapped up with what we have that it's hard to maintain a realistic perspective on things sometimes. If there is something that's stopping you from being satisfied with the way things are, try to find the root of the issue. Talk it out or take some time for yourself to reflect on what steps need to be taken to make these changes. Address potentially invisible issues or dissatisfactions before they become real problems. According to relationship experts Susie and Otto Collins in an article on World of Psychology, it's important to stop stalking and start talking when jealousy hits. If you have a gut-wrenching feeling that your partner is cozying up a little too closely with someone else, vocalize rather than accuse. There may be something missing or just something that's needed to be talked about for a while that you couldn't even see because you were too busy focusing on your suspicions.

Recognize the worth of differences. As has been a common thread throughout these points, look at things horizontally rather than vertically. Try to stop thinking other people are better or worse — they're just different. There is always something desirable that you have that the other person may not, and the other way around. Even in situations where someone quite clearly "has it all," it's about how you choose to work with what you have. Appreciate it and love it because it is yours. Work towards improvement only for your well-being. It's important to remind yourself of your positive traits, Christina Hibbert, PsyD, a clinical psychologist, told World of Psychology's Margarita Tartakovsky, M.S.

Because labels are for soup cans, right? In all actuality, this also comes down to the way you define success and measure your value. Scott Bea, PsyD, a clinical psychologist at the Cleveland Clinic, told The Huffington Post that it's important to avoid your own categorizations and labels of others because this traps you in a self-imposed limit of self-worth. And as we should all know, our self-worth should be limitless. You are more than your title and your label!

Remember that one person's success does not mean you are failing, Richard Smith, Ph.D told the The Huffington Post. This goes beyond the need to stop comparing yourself to others. Replacing any feelings of resentment with happiness for the other person does not take anything away from you, but opens more space for positive thinking. And, according to a recent study by the University of California, Riverside, when you're thinking positively, you can accomplish so much more. As the Buddhist saying goes, "Thousands of candles can be lit from a single candle, and the life of the candle will not be shortened. Happiness never decreases by being shared." Kill that jealousy with kindness, appreciate the good things happening around you, and you'll see how it'll all find its way back to you.

At the end of the day, the person you should really be trying to impress is yourself. Because it’s just you, in your beautiful body, and you should be living each day with positive intention. Do it because you want to do it and it makes you feel good. Think about whether or not you do anything absent-mindedly and without really knowing why you went through the trouble of doing it. Try to eliminate any empty aspirations that just make no sense to you. According to author Narciso D. Domingo in his book, Various Strategies Toward Success, Wealth, and Happiness, it's your responsibility to set up your own standards based on your own perceptions, not what others dictate. Those who create their own happiness are the real MVPs.

Don't beat yourself up for feeling jealous — the feeling is bad enough to begin with. Instead, accept the emotion as a natural part of life, and keep these positive reminders in the back of your brain to fight back whenever the green monster strikes. Eventually, you'll train yourself to push away those emotions, and you'll be happier and healthier.