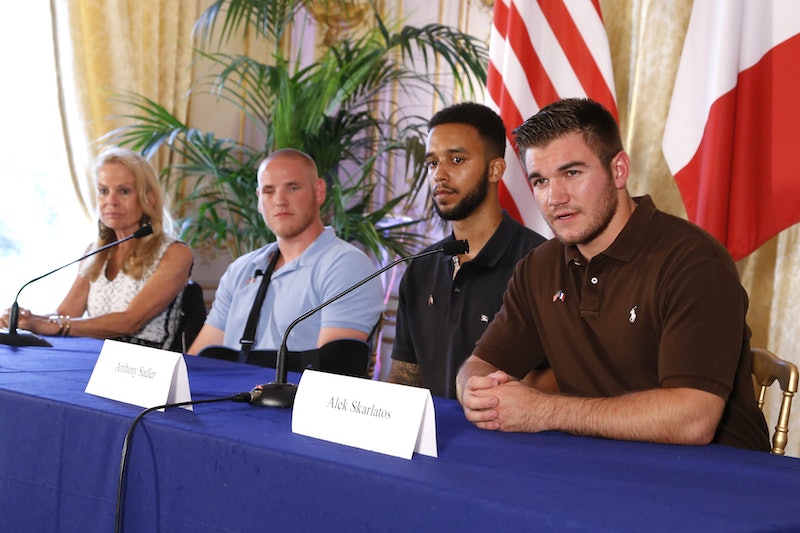 Anthony Sadler, Spencer Stone, and Alek Skarlatos, who subdued an armed man on a Thalys train headed from Amsterdam, Netherlands, to Paris, were awarded France's highest honor Monday at the Élysée Palace. The three Americans received the Legion of Honor, along with fellow British passenger Chris Norman, who helped tackle the gunman. The suspected attacker, Ayoub El-Khazzani, is thought to have ties with Islamic extremist groups, though he has denied those allegations and said he found the Kalashnikov assault weapon with nine magazines of ammunition, a Luger automatic pistol with extra ammo, and a box cutter in a Belgian park and decided to use them to rob train passengers, according to BBC News.

With the amount of ammunition and weapons that El-Khazzani possessed, authorities said his planned attack would've been a massacre if Sadler, Stone, Skarlatos, and Norman hadn't stepped in. President François Hollande said the four men risked their lives to defend "the ideal of liberty and freedom," according to CNN. "By their courage, they saved lives. They gave us an example of what is possible to do in these kinds of situations."

A third man, a French national who has not yet gone public, also confronted the gunman and will be honored at a later date. The Legion of Honor was established in 1802 by Napoleon Bonaparte to recognize great leaders and unusual achievements, according to CNN. Other recipients of the award include Alexander Graham Bell, Clint Eastwood, Dwight Eisenhower, Toni Morrison, and Barbara Streisand.

Sophie David, El-Khazzani’s former lawyer, said he found the weapons in a suitcase in a Belgian park where he was sleeping because his identity documents had been stolen. He decided to use the weapons to rob the passengers, according to the International Business Times:

He is dumbfounded that his act is being linked to terrorism. He says that by chance he found a suitcase with a weapon, with a telephone, hidden away. He said he found it in the park which is just next to the Midi Station in Brussels, where he often sleeps with other homeless people.

Stone and Skarlatos are both off-duty U.S. military members, and Sadler is a student at California State University in Sacramento. At a press conference on Sunday, Sadler said El-Khazzani didn't say anything during their entire exchange:

He never said a word. At that time, it was either do something or die.

Briton Chris Norman said he thought he was going to die either way, so he might as well go down in a fight, according to The Guardian:

I would rather die being active trying to get him down than simply sit in the corner and be shot.

When Skarlatos and Stone ran and started beating on the gunman, they said he pulled out every weapon he had. He almost cut off Stone's thumb with the box cutter during their altercation, and Stone knew that they were in it until someone could no longer fight, according to The Guardian:

He seemed like he was ready to fight to the end. So were we.

During the award ceremony Monday, Norman said he couldn't believe that he was receiving the honor. He said he didn't really deserve to, and he gave his thanks to Skarlatos and Stone, according to The Telegraph:

If you had told me before that I would one day be awarded the Legion d'Honneur, I wouldn’t have believed it. I did what I could, what I had to do, but it's the others you should be thanking, especially Spence and Alek.

The four men have received thanks from around the world. Skarlatos, Stone, and Sadler all received calls from President Barack Obama, and Secretary of Defense Ash Carter and Secretary of State John Kerry also issued their praise and wishes that all three have a speedy recovery, according to NBC News.