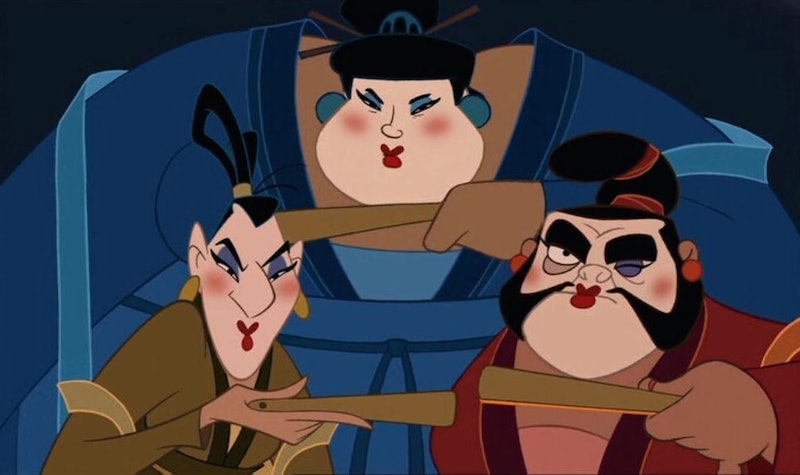 It's fair to say the the garden variety millennials have a complicated relationship with Disney princesses, a relationship that has us clinging to a favorite while simultaneously blaming it for being problematic on a range from "unrealistic hair expectations" to "death of feminism." Disney movies tend to place princesses in a focal point, but whether they give princesses any legitimate power is a whole different story. Only in the last quarter century have we seen female protagonists inching towards progress, and it really makes you wonder what the gender swapped Disney movies would be like, especially in the early days.

Visually and conceptually, we've all seen it before. If "Disney Princesses as power rangers" and "Disney Princesses as toasters" aren't off limits, and neither is "Disney Princesses as dudes." But it's strange to actually imagine how it would alter the overall plot of a film. Of course, I myself am strange, so I envisioned how a gender-swapped Disney movie would go down. Of course I don't think there's any "right" or "wrong" way to be a male or female. So, as per usual, I advise you take all my snippets with a grain of salt, a heavy dose of sarcasm, and the prevalent knowledge that this is a listicle about gender swapped Disney princesses.

And, on that note, here's how I think the following Disney classics would be different.

The Evil King is totally jealous of his stepson Snow being the fairest of them all, so he put a hit on Snow. Luckily, Snow ended up stumbling on a house of lady dwarves who just want to cook and clean for him. Eventually, the Evil King caught up with him and offered him... a beer, because honestly he would find that really impressive. They eventually hugged it out, and now they're going to the Dodgers game next week.

Cinderello was at a stalemate, trapped living with his evil stepfather and stepbrothers... not so much because he couldn't leave, but because of all the effort and responsibility that would come with trying to strike it out on his own. Eventually, he got inspired when it was announced the resident Princess Charming needed to find a husband, and he thought, "Yeah, I could be a trophy husband." Although his efforts to woo the Princess were successful and he gladly moved in with her family, he stalled the wedding indefinitely because of his "trust issues." Eventually, they kicked him out of the palace at the ripe old age of 27, at which point he instantly got a high-paying, high-ranking job, in spite of his lack of talent, experience, or work ethic.

Honestly, our hero felt he was entitled to kiss the girl after saving Princess Erica. And, when an evil sea warlock offered to trade in his voice for a legs, he was tempted, he really was. A man without a voice sounds crazy, but it seemed like a decent deal. But once Ursulo revealed that our little merman wouldn't be able to use his voice to harass lady bloggers anonymously on Twitter, he was like "hard pass" and swam away.

A girl who prefers books to men? Peculiar. A guy that prefers books to women? Deep. Incidentally, in the first half of the movie we follow our protagonist as he spends all day in the Barnes and Nobles of his poor provincial town listening to The Smiths, and the second half of the movie changing the nottie in the castle into the hottie in the castle by taking off her glasses and ponytail. I mean, true love. True. Love.

He's as swift as the coursing river, with all the force of a great typhoon, and the strength of a raging fire, plus he's mysterious as the dark side of the moon. Bonus: he brings honor to his family by virtue of being a guy. Then, why is it that he wants to leave the army, put on his favorite shade of Ruby Woo lipstick, and really embrace his feminine side? Actually, Mulan would be just as good gender swapped.

Actually, Bro-Elsa would still be told to conceal don't feel. Real Men Don't Cry. Thus, it's deeply satisfying to see him scream that perfect boy is gone and burst into joyful tears on a mountain top. Screw gender stereotypes.