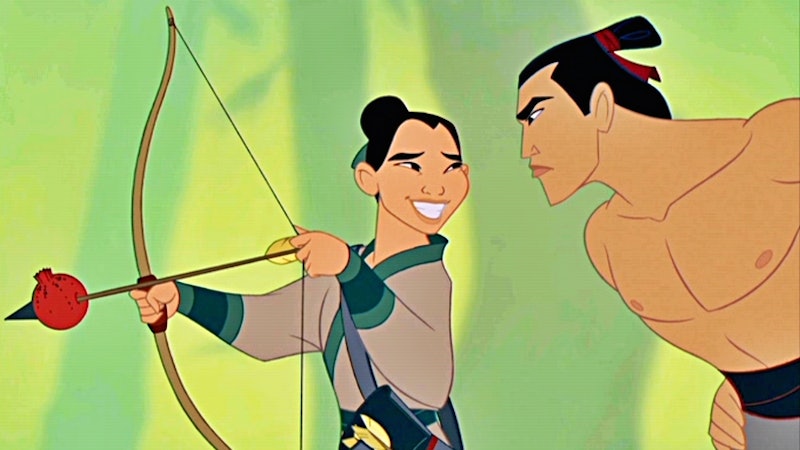 As a child of the '90s, I grew up loving — nay, worshiping — virtually every film in the Disney classics canon. There was a solid year-and-a-half stretch of my childhood during which I demanded to watch The Lion King one to three times per day. When you're putting that many woman hours into watching something, especially as an impressionable child, you're bound to soak up some moral and ethical lessons. I didn't realize it at the time, but I was getting a lesson about what it means to be a woman from both the feminist and the not-so-feminist Disney princesses.

Disney taught me myriad lessons about life, love, happiness, and femininity. I learned that money doesn't guarantee a fulfilling life, and that sometimes the worst circumstances spawn the strongest people. I learned that it's nearly always the most difficult challenges that yield the most fulfilling results. I also learned that sometimes, as a woman, your voice isn't going to be respected the way that it should. And if all else fails, you can always lop off your luscious locks, bandage your boobs down, and get the last laugh when you astound people with your wit and ingenuity — only to reveal that you are in fact a member of the fairer sex.

As time has passed, Disney has gotten much more progressive with their portrayals of women. Long gone are the Cinderellas and Auroras, who lack any agency and must depend on men to get them out of trouble. Instead, we have the Tianas and Elsas and Mulans, who are, however subconsciously, instilling in young girls the idea that you can be empowered and fight your own battles and create your own happy ending without the help of a man. Disney has come a long way in its depiction of women, and I think it's necessary at this time to look at the relative feminism of all the Disney princesses. Let's consider the range of views portrayed by the Disney classics, from most feminist to least feminist.

Mulan is scoring at the top of my list here for many reasons. She overtly challenges gender roles in a very traditional culture. She physically fights almost to the death for her family and to earn her own honor and respect. She saves the lives of scores of men (the emperor, her father, her fellow soldiers, etc.) who never would have given her the time of day as a fighter. Mulan is hardcore and progressive, and she was a Disney feminist icon long before the company made strong, empowered princesses the norm with characters like Merida and Tiana.

Tiana is a business owner, y'all. Yes, her story is not devoid of romance, but love is not the key focus. From the get-go, Tiana dreams of starting her own restaurant. Following her passion and achieving economic independence and stability is her chief aim in life. She does fall in love, but who wouldn't fall in love with a kickass, independent business owner like Tiana? She is definitely a feminist beacon among a sea of damsels waiting to be rescued.

It's a tale as old as time: A princess' parents arrange for her to marry a man for the good of the kingdom, forcing her to be a subservient pawn in a system that completely robs her of any agency. Since the early Disney days, princesses have been rebelling against this. Merida takes this to a new level: She is incredibly vocal about choosing her own path, and resents being treated like a prize at a county fair. She also challenges gender norms, and slowly reshapes public perception of femininity in her kingdom through her tomboy ways. By the end of the film, Merida teaches those around her that women come in all shapes and sizes, and that being true to yourself is more important than adhering to any antiquated notions of what it means to be a "proper" female.

I recently watched Pocahontas for the first time in years, and was flabbergasted by the ending. Pocahontas is one of the few Disney films in which the heroine accepts that her destiny is bigger than any romance, and willingly chooses to forgo romantic happiness even though it's right in her grasp. Pocahontas is a straight-up badass. She is fiercely independent, and forces her father and the other elders in her community to respect a woman's right to have an opinion and choose her own path. Pocahontas is no damsel in distress. Rather, she saves John Smith's life, and forces her tribe to open their minds to accept him. In the end, Pocahontas and Smith part ways and go on to follow their individual destinies. Pocahontas was instilling feminism in me as a child, and I didn't even realize it.

Ah, mah girl 'Punzel. Rapunzel is a bad bitch who overcomes a wicked bout of Stockholm syndrome and runs away from her terrifying mother/kidnapper in an epic escape sponsored by Biotin. Rapunzel doesn't take any crap from anyone. She doesn't need a man to solve her problems. Like Merida, she even wields her own weapon, and isn't afraid to use it. Rapunzel knows her worth, and that her given lot in life isn't up to the standard she holds herself to, so she does something about it. Rapunzel has agency, she has panache, and though she falls in love, she doesn't need Flynn to secure her happiness — she does that on her own.

Elsa is literally an ice queen, and she don't need no man to run her castle. Frozen is one of the few Disney Princess movies in which none of the key plots points revolve around the protagonist getting wifed up. Elsa has her issues, but she's secure in herself (and too busy building elaborate ice sculptures) to pursue any sexy snowmen. She also keeps her dumb, more prototypically Disney princess sister from marrying the first man to hair flip his Justin Bieber flow in her direction. While Elsa doesn't take a particularly feminist stance, the themes of independence and family over all else makes Elsa more of a feminist than some of her other "happily ever after" princess comrades.

Belle is a tough one. She's got a lot going for her. She's all about that booklearnin', and despite the daft villagers giving her crap for being the only women in the village who has a shred of intelligence and self-awareness, Belle isn't afraid to be who she is. Belle also knows — and hates — a misogynist when she sees one, and she's quick to kick the creepy Gaston quite literally out the door. Belle values intelligence and creativity, and expects those around her to share her values. So that all sounds well and good, right?

But then you have the whole "falling for a controlling beast" thing. Granted, I think that Beast's demeanor comes from his unlucky situation in life, and he does grow to respect Belle — even her stubborn sass that originally rubbed him the wrong way. All in all, I think Belle's got a lot of good going for her, and she's one of the earlier feminist princesses that we see. So I say good for her.

Here we are with yet another princess locked in a castle. Jasmine was kind of a pain in the ass, and so from a young age, I obviously loved her. She was stubborn and opinionated and refused to let the men in her life boss her around (except for the whole awkward maybe-sex-slave thing with Jafar). Jasmine, with the help of her open-minded father, ultimately ends up having the agency to choose her own mate and follow her heart, all while financially supporting the guy she loves. Jasmine knows that she is more than just a pretty face and a rockin' bod, and refuses to be objectified by her suitors. All in all, Jazzy is a pretty strong woman with a solid feminist streak to inspire you.

Ariel is a bit of a toughy. She is adamant about exploring her creative side and making her own voice heard ... but then she literally sacrifices her voice to go live on land and mutely pursue a boy she saw on the beach for a few seconds who she thought was really hot.

Most of Ariel's headstrong confidence and fearless risk-taking can be attributed to young love and youthful rebellion, rather than any type of feminist agenda. She is basically forced to play along with Ursula's game and hope that she can silently woo Eric (who is pretty much an idiot and immediately drops the girl he was falling in love with because he meets a girl with a pretty singing voice). Not the most feminist princess we've seen.

Cinderella tells the tale of a woman who is imprisoned and forced into domestic servitude by the other females in her life. A pure stroke of chance provides her with a fairy godmother, a pretty dress, some sick heels, and a coach to escort her to a ball, at which she faces the only prospect of improving her life via catching the eye of the handsome prince. Luckily, Cinderella is pretty enough to grab the prince's attention, but she has to run away so he won't see that she's actually poor.

After several lucky incidents, Cinderella ends up with the prince, but not really because of anything she did. She was willing to continue her crappy lifestyle and never tried to escape her situation. She waited for a prince to whisk her away, and if that hadn't happened, she would have been checking out her reflection in soap bubbles for the rest of her dreary life.

Snow White's story centers around men. The only other woman involved in the film is the evil Queen / scary old lady who hires a hitman to have her killed. That Queen's got agency. Snow White, however, would have been just a bloody heart in a box if it weren't for the creepy huntsman's lack of murderous rage towards her. After her near-death experience, the homeless Snow White stumbles across a cottage full of dwarves. She then uses her feminine agency — I mean, trophy wife skills — to earn her keep and assure that her seven messy roommates are happy. Then she meets the prince, and he saves her. All Snow White really does the whole movie is almost die, get shade thrown at her by the Queen, and wash dishes. Not the most feminist.

Eek. Sleeping Beauty is not exactly a beacon of feminist progress. Aurora literally sleeps for like three quarters of the movie. Without a prince who was willing to fight through a terrifying field of thorns to wake her up, Sleeping Beauty would have had a pretty boring ending. Not to mention the creep factor involved in the whole "kiss breaks the spell" thing. I would be so pissed if I were woken from a cursed slumber by a gross dude kissing me. Aurora just straight-up has no agency, and really isn't doing much in the way of feminine progress.

More like this
24 History-Making Black Women You Probably Didn't Learn About In School
By Ayana Lage and JR Thorpe
25 Inspiring Quotes From Black Women To Celebrate Black History Month
By Kyli Rodriguez-Cayro and JR Thorpe
Taylor Lautner Copped To Finding Jacob "A Little Annoying" In Twilight
By Stephanie Topacio Long
James Cameron May Come To Regret His 'Titanic' Door Experiment
By Stephanie Topacio Long
Get Even More From Bustle — Sign Up For The Newsletter
From hair trends to relationship advice, our daily newsletter has everything you need to sound like a person who’s on TikTok, even if you aren’t.