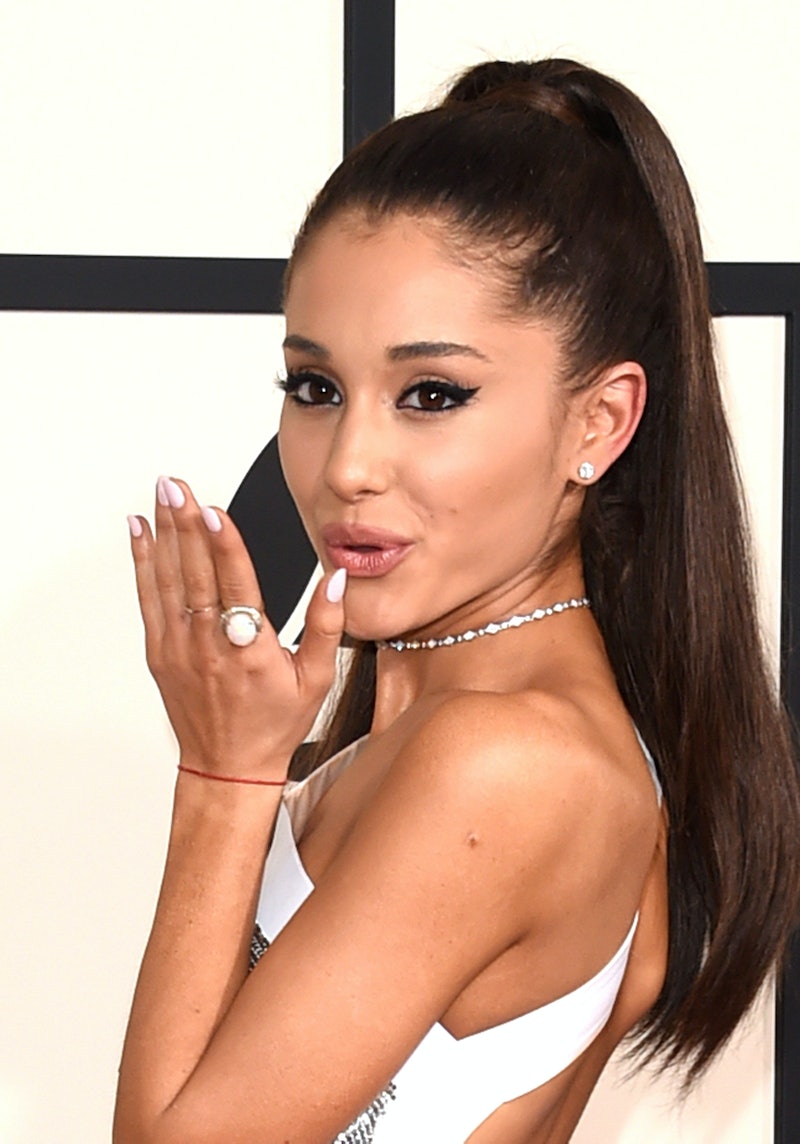 While everyone is focusing on her career as a pop star, her ponytail, or that whole donut-licking thing, can't get past Ariana Grande's nails and how to get them for myself. While my hair could probably not reach the sky-high levels of her ponytail any time soon, the nails seem almost achievable. At least that was the thought I had when I began my experience of trying to get Grande's manicure. This is why I decided to give my nails this pop star's treatment.

OK, let me confess first, though. I didn't exactly have to undergo some extreme mani makeover to achieve her nail length, shape, and color. The more I poured over dozens of pictures of Grande's fingers, the more I realized she and I were twinning this whole time. As it turns out, we both have a love for pastel polishes and oval nail shapes. Even though I'm not a huge fan when it comes to Grande's music, I absolutely love her style, and seeing how much her nail choices reflect mine enticed me to join her bandwagon. If you're feeling inclined to try some ultra girly nails, I invite you to draw inspiration from Grande too! A little pink will go a long way and you'll be sure to love your new nails.

First thing's first: an oval nail shape will be your new go-to when imitating Grande. Occasionally, her shorter nails are more squoval, but she generally maintains semi-lengthy, oval-shaped nails. You'd think I'd be a master of achieving this look by now, considering it's my standard length and shape, but I was not blessed with DIY mani powers (I left the shaping up to the professionals). However, I talked to Sandi Crystal Ball, the force behind YouTube's CutePolish channel, who knows what it takes to get Grande's nails.

To achieve Grande's look, Ball recommends using a crystal nail file. It will not only prevent chipping, but "will also leave your nail edges super smooth which is important for the rounded nail shape because you don't want them to look unbalanced." To begin, start filing from one side of your nail, using a curving motion as you approach the nail tip. Do the same on the other side until your finished shape is clean and even. I'd assume Grande agrees with Ball in thinking an oval shape is "a beautiful choice because it elongates the look of the fingers and nails, giving them a more feminine and dainty appearance." After all, it is Grande's signature!

You'd almost think Grande wears the same polish all of the time. She doesn't really stray from her usual pastel pinks and whites. I'm definitely all too familiar with the struggle of looking like I rock the same old when I only go a half shade lighter or darker from my last polish. The key is to stick with blush pinks and chic nude polishes. You can't really go wrong with these anyway, considering nudes and other subtle colors are becoming the LBDs of polishes. I decided to paint my nails a similar pastel pink from this Grande post (not that this particular color really stood out among the sea of other pinks she wears):

I chose OPI's "Mod About You" polish because the colored seemed comparable to Grande's bathroom selfie nails (coincidentally, her retro, mod-themed "Problem" video made that color choice more perfect than I thought). Plus, this pastel made for one last cliche "casually hold an ice cream cone while showing off my mani" summer photo.

Here's a not so delicious, ice cream-less close up:

If "Mod About You" doesn't suit your fancy, there are plenty more pastels where that came from. Some of my favorites include, OPI's "Bubble Bath" and Essie's "Fiji".

If you want to hear it straight from an expert's mouth, Ball recommends OPI's "Alpine Snow," Sally Hansen's "Almost Almond," and Color Club's "Feathered Hair Out to There." And don't forget to layer! Start with your base coat, proceed with two coats of your polish, and top it all off with a clear coat.

3. Maintain Your Nails On Fleek

Have you ever seen Grande's nails not on point? I'll answer for you: No! Therefore, keeping your pretty in pink nails up to par is a must. You didn't think a little filing and a few polish strokes was all there was to it, did you?

You certainly don't want your nails breaking after a fresh mani. To keep your nails healthy and strong, Ball recommends using Sally Hansen's Diamond Strength Hardener as a base coat. You can't forget about the magic of a little Burt Bee's Lemon Butter Cuticle Cream either! It's seriously a miracle worker and if you don't believe me... Ball says, "I've been using this for years and it's always my go-to product when my nails need some TLC".

It was a compliment palooza when I rocked my Ariana Grande inspired nails all summer! OPI should cut me a commission check for all the times I wrote down the color and brand for all those who wanted to know. I wish you the same success when you turn to Grande for nail-spiration! With these precious nails, you'll have "one less, one less problem" on your hands.