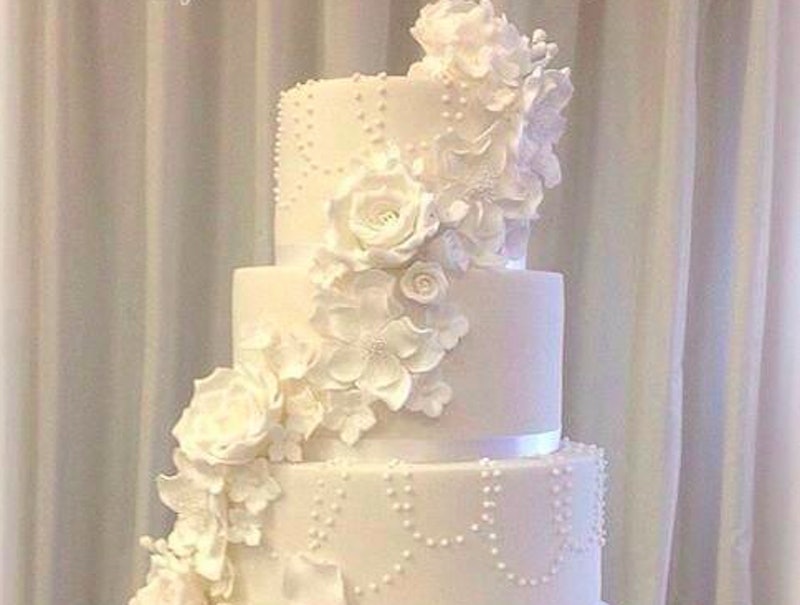 As someone who once worked at a wedding cake bakery, I have spent an inordinate amount of time thinking about my future wedding cake. And as someone who is painfully obsessed with Marvel comics, I've spent even longer obsessing over so many superheroes that they outnumber my actual, nonfictional friends. That being said, this superhero wedding cake is possibly the most beautiful thing I have ever laid these eyes on, and I once saw Andrew Garfield in the flesh. (Just kidding, nothing will ever top that, but this comes pretty damn close.)

In my day I've seen a lot of your typical Batman-themed groom's cakes, or even wedding cakes that have a secret superhero bursting out the bottom in some sad corner that gets photographed once and forgotten, but this cake blows all of those out of the water. First off, from the front it looks like a totally gorgeous and classy wedding cake—but then turn it around, and WHAM. The Avengers have assembled in their most delicious, adorable mission to date. (They also invited Batman, because that's what super bros do.)

I'm going to need all of you to brace yourselves for the awesome that is about to hit your brain space. Ready? TOO BAD, here it is anyway:

The cake, designed by Julia Baker of Tier by Tier cakes, is already a decadent work of art. But bride and groom Kia and Billy had an extra special request of Baker, who more than delivered with this awesome hidden seam in the back of the cake:

Be still my geeky heart.

"The bride and groom, Kia and Billy, went to a wedding and saw a similar double take I created in a ghostbuster theme," Julia Baker wrote to Bustle. "This gave them the inspiration for their superhero cake. They are both superhero fans and wanted to show both sides of their personalities, both classy and fun! Together we sat down over tea and cake and drew up their perfect cake. One year later, the first time they saw the cake was the morning of their wedding and they both loved it!"

Much like the Avengers, Baker's viral success with this cake—which took a whopping 40 hours to craft—has now earned her enquiries from people all over the world. Unlike the Avengers, she won't be leaving a trail of destruction in her wake. If anybody needs me, I'll be eating my lunch in a corner and wishing it were even three percent as badass as anything Baker has ever made.