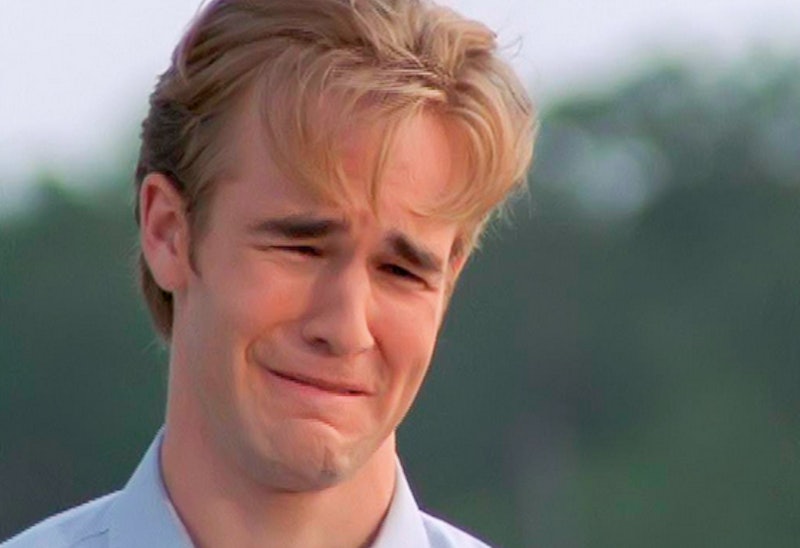 Everyone has the story of "the one who got away," and for early millennium, thirteen-year-old me, it was the guy who played Chris Halliwell on Charmed. It would be many eons before I liked a real human more than a fictional one, and oh boy, did my prepubescent bb heart have it bad. Normal teenagers cried at their parents about setting curfews; I cried at my parents because one time my mom picked me up from swim team late, and I missed the beginning of an episode with approximately two minutes of Drew Fuller's slightly stubbled, boyishly handsome face. (These were the #DarkDays before DVR, if you can even let your brain journey back to such a time.)

Now let's examine having a crush in 2015. HAHA, just kidding, there's no such thing! Gen Z has eradicated the idea of crushes and replaced it with rampant tweeting at members of One Direction, and our own generation is so eye-glued to our Tinder screens that the only kind of crushing we do is enduring the friends who still send us Candy Crush invitations on Facebook. (Note to them: I will find you. And I will kill you.) There is no crushing at all, actually; only lighting pressing our thumbs on something as we swipe left or right. All of the intrigue and awkwardness and brutality of our youth is GONE. And while that might be a good thing for of our stress-induced bacne and the hair we once burned several times over with a crimper, it is sorry news for our adorable ex-preteen hearts. But don't worry, y'all. I am here to help you relive the magic, one excruciatingly awkward thing at a time. Here are all the ways you expressed your crushes in the 2000s:

And that character woohoo'd with the one that looked just like you ~all night long~.

You Took Sneaky Pictures Of Them With Your Flip Phone

And then spent your nights curled up under your blanket worshipping the tiny picture of their left ear and the tuft of hair you managed to snap on the DL (#bless).

We were the very last generation of "he loves me, he loves me not" shenanigans. RIP, us.

You Made Them An Option When You Played M.A.S.H.

But only when you played with your best best friend who would never rat you and your war torn lil heart out on it. (Also OMG at those times you scored living in a mansion and driving a Corvette with 18 kids and your crush, can I get a hellz yeah?!)

You Stalked The Hell Out Of Their Myspace

And then not-so-subtly mentioned the emo band they had playing as their background REALLY LOUDLY that time you and your BFF were in line seven people behind them in the cafeteria.

Before vaguebooking and using the sadder filters for your coffee order on Instagram, there was posting an Evanescence lyric on AIM.

You Gave Them A Code Name With Your Friends

Running into your friend's crush in the hall between classes and immediately reporting their whereabouts to her was, like, the BAMF-est thing a seventh grader could do.

So you'd always know when it was "apply an inordinate amount of Juicy Tube lip gloss" o'clock.

Including and not limited to: straightening the ever-living-bejeezus out of it; using a hair-o-gami; jamming more hair clips into your scalp than the entire combined cast of Lizzie McGuire over their three season run.

Not the semi-secret LiveJournal — the super duper sleuther secret one that is still lurking on the internet, waiting for a future employer to flag in a background check, god help you.

"Is your refrigerator running? ... I love you."

"HAGS" was basically "I love you" to your addled preteen brain.

GEN Z DOESN'T EVEN KNOW HOW EASY THEY HAVE IT, THAT SHE WAS BORN FAR ENOUGH AHEAD OF THEM TO PREEMPTIVELY BREAK THEIR FALLS. We couldn't even Facebook stalk. 2003 was a dark time for us all.