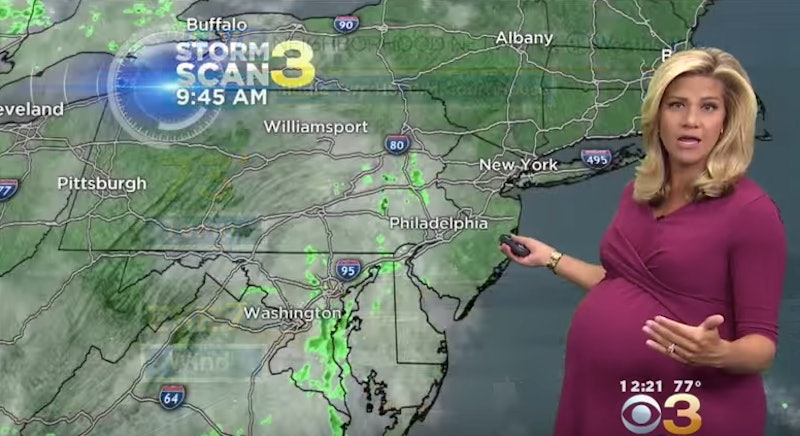 As anyone who's ever been pregnant will tell you, working through those final weeks of pregnancy isn't exactly the easiest. The ankle swelling, the constant peeing ... even a quick commute can be can be straight-up grueling when you've got something the size of a watermelon hanging out in your belly. Any woman who's going into work every day at nearly-nine-months-pregnant is committed. Unfortunately, not everyone agrees. CBS 3 Philly meteorologist Katie Fehrlinger was publicly "bump shamed" recently by viewers for daring to appear on camera at 35 weeks pregnant with twins. (Because yes, as if we needed any more reminding, the Internet can be a cruel and terrible place.) Her powerful response to the criticism, though, has been going steadily viral since last week. And it demands a serious slow clap.

According to a Facebook post Fehrlinger wrote on Wednesday, August 19, she was pretty shocked when she discovered dozens of tweets and comments swirling the Interwebs about her bump. In her post, Fehrlinger says that she was called "disgusting" (among other things), and at one point, was even likened to looking like a "sausage casing." And as you might imagine, that last one stung pretty hard.

"The one that came in about the sausage in casing, that one upset me the most," she recently told Yahoo Parenting. "I didn’t respond, I tried to move on, but it really hurt my feelings. Then I got another one this week, about looking ‘disgusting,’ and a switch flipped for me. I had a moment of clarity — I didn't get embarrassed or hurt. I got fed up."

So fed up, in fact, that Fehrlinger sat down and drafted up a post which she later said was all about catharsis. In the end, though, she was "overwhelmed" and amazed by the response it garnered.

"So the nature of my job makes me an easy target for criticism," the post begins. "I will always understand that, and I will most typically just ignore it. However, after someone blatantly called me a 'sausage in casing' and another declared that 'sticking your pregnant abdomen out like that is disgusting,' I felt a need to draw a line and speak up."

Even during the most uncomfortable — and let's face it, less than glamorous — symptoms of pregnancy, what women go through to bring their precious children into the world is, simply put, AMAZING and you should be lauded.

Frankly, I don't care how "terrible" or "inappropriate" anyone thinks I look. I will gladly gain 50 pounds & suffer sleepless, uncomfortable nights if it means upping my chances to deliver 2 healthy baby girls. Now it's about more than aesthetics. I want these babies to have the best start possible. And that hopefully means my belly that "looks like it's about to explode!" will continue to grow the next few weeks.

I say let's raise a Shirley Temple to swollen feet, stretch marks, nausea, all the extra pounds and the dark circles! They're badges of motherhood. And for those of you who think that's "disgusting", remember a woman went through the very same thing to bring YOU into the world.

In the meantime, let's all remember the lesson Mom taught us — if you have nothing nice to say, say nothing at all.

If you ask me, Fehrlinger's mom "manifesto" should be printed out and taped to bedroom mirrors pretty much everywhere, considering what a powerful, body-pos reminder it is of just how amazing pregnancy and childbirth are. And it looks like a lot of people out there would agree with me on that one — less than a week after the post first went up, it's already gained over 76,000 likes and 5,600 shares.

Fehrlinger even spoke about the outpouring of support in a special August 21 segment on her station, in which she told her co-hosts just why she thinks the post struck such a chord with people. "I think it's because this is the most relatable thing in the world. We're all here because our mom went through this journey to have us."

Unfortunately, this isn't the only time the soon-to-be mom has had to step forward and defend her pregnancy. Earlier this month, viewers also made some insensitive comments, questioning why Fehrlinger was still working during the final stage of her pregnancy. (You know, as if that's really anyone's business.) Fehrlinger responded with a different Facebook post, in which she unfortunately also had to defend her size. "Keep in mind guys, there are TWO little peanuts cookin' in there, so I've grown WAY more, and WAY faster than the average Mama Bear," she wrote. "Just wanted you all to understand, no one is forcing me to work & my doctor has cleared me to continue for now. It's a personal choice & I PROMISE you, I'm taking life easy."

Of course, when it comes to public bump shaming in general, Fehrlinger isn't alone. Just ask celebs like Kim Kardashian, who's been famously criticized for both gaining too much weight during her first pregnancy and not appearing pregnant at all in her second. "Everyone’s body is different, every pregnancy is very different!" Kardashian fired back on Instagram earlier this month. "I've learned to love my body at every stage! I'm going to get even bigger & that’s beautiful too!"

And then there was model Sarah Stage, who last March defended her own pregnancy after Instagrammers criticized the small size of her bump and questioned whether or she was eating enough. Stage later fired back with one simple photo to quiet the body shamers: A pic of herself eating In-N-Out to prove that, yes, she does eat, guys.

As long as the Internet exists, it's pretty clear that trolls will keep on trolling. So moms-to-be should do themselves a favor and keep Fehrlinger's advice top-of-mind. Because even in all those not-so-glowing moments of pregnancy, you are beautiful, powerful, and doing a pretty amazing thing with that body of yours.