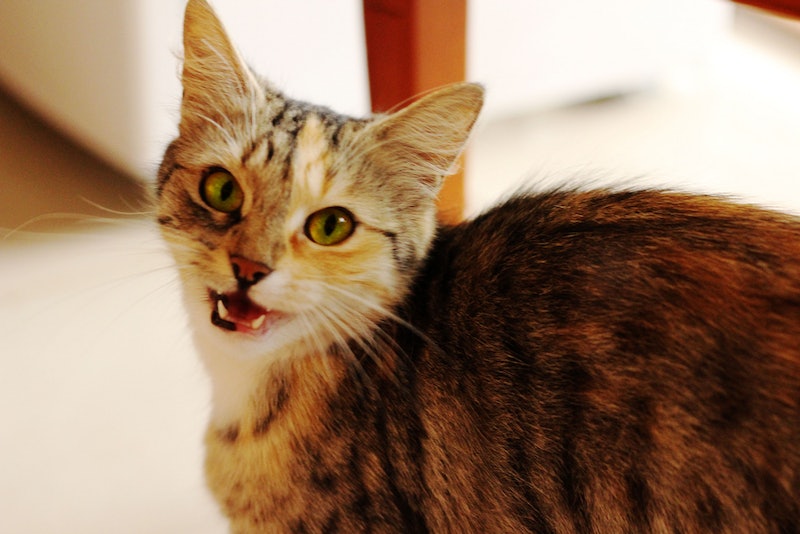 It's well known that cats dislike any action or activity they haven't decided to perform or participate in themselves — but this angry cat getting a bath? It's definitely making sure we all know how displeased it is. As the cat's owner tries to bathe her, the furry fiend expresses her distaste for the ritual loud and clear by yelling "No more!" from the tub. If you don't believe me, watch the video below. The exclamation at around 19 seconds, after the human tries to convince her to stay for "just a little bit more," is especially uncanny.

Why this cat needs a bath, I am not entirely sure. Cats clean themselves, I thought. But opinions on the matter are mixed: Petco claims your cat needs a bath "if his coat is discolored, smelly or oily despite a thorough brushing" (though they probably sell the supplies necessary for said cat bathing, so take their advice with a grain of salt), while the ASPCA says the typical cat doesn't need to be doused in water unless "she is very dirty or gets into something sticky or smelly." Maybe the nameless cat in the video has a point with her cry for "no more."

Is she really speaking English, or does her meow just happen to sound like human words? While common sense would support the latter explanation, the plethora of animals out there who have at least appeared to speak English does make one suspicious.

I mean, I'm not saying animals secretly understand every word we say or anything, but... well, watch these videos and try to maintain your skepticism.

There's more than one cat out there who dislikes bath time. Tigger's pleas are so impassioned that commenters complained that such an unhappy cat was even getting a bath — but in this case, it may have been a necessary evil: According to Tigger's human representative, "Tigger was really dirty to the point that he was leaving traces of dirt and stains all over my bed, his bed, and the dog's bed (he loves to roll in the dirt with my dog and lay under cars with the neighbor's cat!)." In case you're still concerned about Tigger's welfare, you can stay updated on his whereabouts — as well as his love affair with another cat known as @skimpity_scamp — by following @tiggerthenobathcat on Instagram.

2. This "Oh Long Johnson" cat has a poem for America.

If you didn't catch this cat on America's Funniest Home Videos, you probably found him on YouTube reciting his "Oh Long Johnson" poem. The message is cryptic, but the "words" appear to tell the story of someone named Johnson who wears long johns and plays the piano. Or something like that. Hey, is Long John Johnson really any weirder than Cotton-Eye Joe?

3. Mishka the talking husky is a pretty girl and is not stupid.

Mishka's owner is cheating a bit by feeding her dog phrases like "I love you" and "Are you a pretty girl?" However, note that she responds with a howl resembling "I'm a pretty girl" rather than repeating the question back. Also note that she responds to "Are you stupid?" with "No!" Hmm, I sense a common favorite word among these pets. Our middle school health teachers could have used them during all those lessons on peer pressure.

Marc Métraln brought his pooch Miss Wendy to Britain's Got Talent, and at first, the whole audience thought the act was a joke when Wendy refused to say anything. But then, after Métraln implored her to "say something," she opened her mouth and clearly annunciated, "No." And after some more coaxing, she pronounced "Yes" equally clearly. As the act went on and Wendy started speaking different languages, however, the audience realized she was actually wearing a mouth piece controlled by Métraln, who ventriloquized her speech.

5. The "No no no" cat is against something or another.

Before the "no more" cat, there was the good old-fashioned "no no no" cat. I'm not sure exactly what this cat is against — one commenter theorizes, "When your parent tries to get you to talk to family over the phone" — but at least the cat is asserting its preferences clearly.

Of all the words these pets could have learned to pronounce, "no" was probably a good choice. It's an important one to know. A lot of us could probably learn a thing or two about setting boundaries from talking cats and dogs.