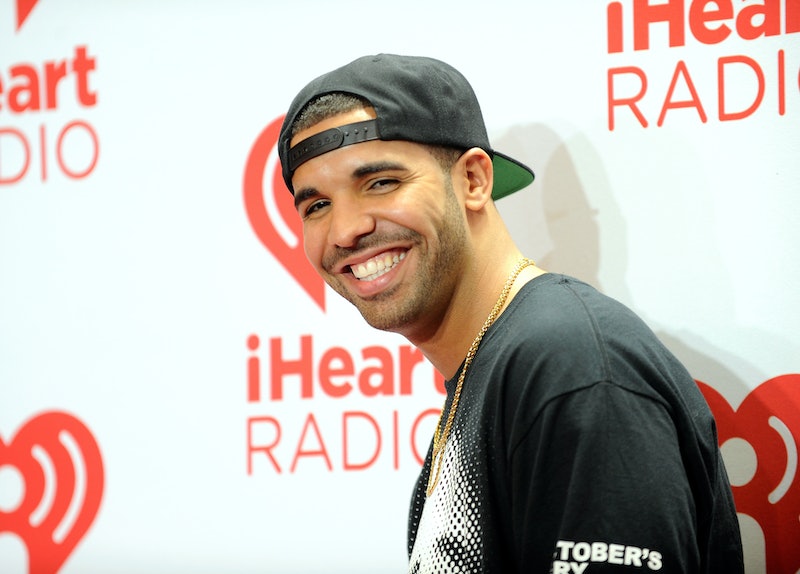 If you're still shellshocked from those pictures of Madonna making out with Drake at Coachella, let these super grainy photos of Drake and Serena Williams potentially kissing make you feel so much better about life (mostly because the supposed kiss may mean they're actually dating instead of Drake just being completely ambushed onstage). Of course, rumors that the rapper and tennis star are "together together" have been floating around for years (probably because they've been close since 2010), but TMZ is pretty certain that these blurry photos count as some serious evidence that the two are a couple. Romantically involved or not, it's time that we answer the most important question of all: How did Drake and Serena Williams meet?

According to sports site The Post Game's chronology of the Drake/Serena Williams relationship, the pair first started hanging out after the tennis champ broke up with rapper Common in 2010. And though I don't know for sure exactly how they met (like, at what party or event or which friends introduced them), it stands to reason that the celebs run in the same A-list social circles and that their meeting was pretty much inevitable. The two were clearly already pretty close in 2011, as Drake had nothing but high praise for the tennis star.

"I really, really love and care for Serena Williams. She's incredible. That’s someone I’m proud to say I know," the rapper gushed to Complex at the time. "She's definitely in my life and I’m in her life. It's great to watch her play tennis. Very impressive."

He was also impressed enough to openly flirt with the athlete on Twitter, and this tweet from 2011 that the Internet has unearthed since the stars' apparent coupledom pretty much says it all:

Of course, the couple's rumored romance from back in the day wasn't without its complications — Common ignited some serious beef with Drake over the situation. Common told VladTV in a 2014 interview,

At that time, I think it was the Drake-Serena situation. I didn’t know what was going on with that. And I ain’t know if he was throwing shots at me. [Serena] my ex and we’re going our separate ways. So unfortunately the war might have been over a girl, but at the time I never said that. It wasn’t totally that. It was more of, "Do you respect me? 'Cause I actually like you as an artist."

Williams was seemingly referring to her relationship with Common when she openly told Celebuzz in 2012 that "the last relationship just was too much of a heartbreak for me. I just can’t go through that anymore. It was hard."

Drake has seen Williams compete in many matches over the years, including her win against Maria Sharapova at Wimbledon semi-finals earlier this summer. It was there that Williams told a reporter (who had asked if Drake was her "lucky mascot") that she and the rapper are more like family. "We've been friends for, like, so many years," Williams said. "Just like family."

Even though Williams told Celebuzz in 2012 that she had "given up on dating" during a super candid interview, it looks like the Canadian rapper might be worth changing her mind for. I mean, just watch this clip of the two grinning like idiots at each other:

Because it seriously doesn't get any cuter than that.