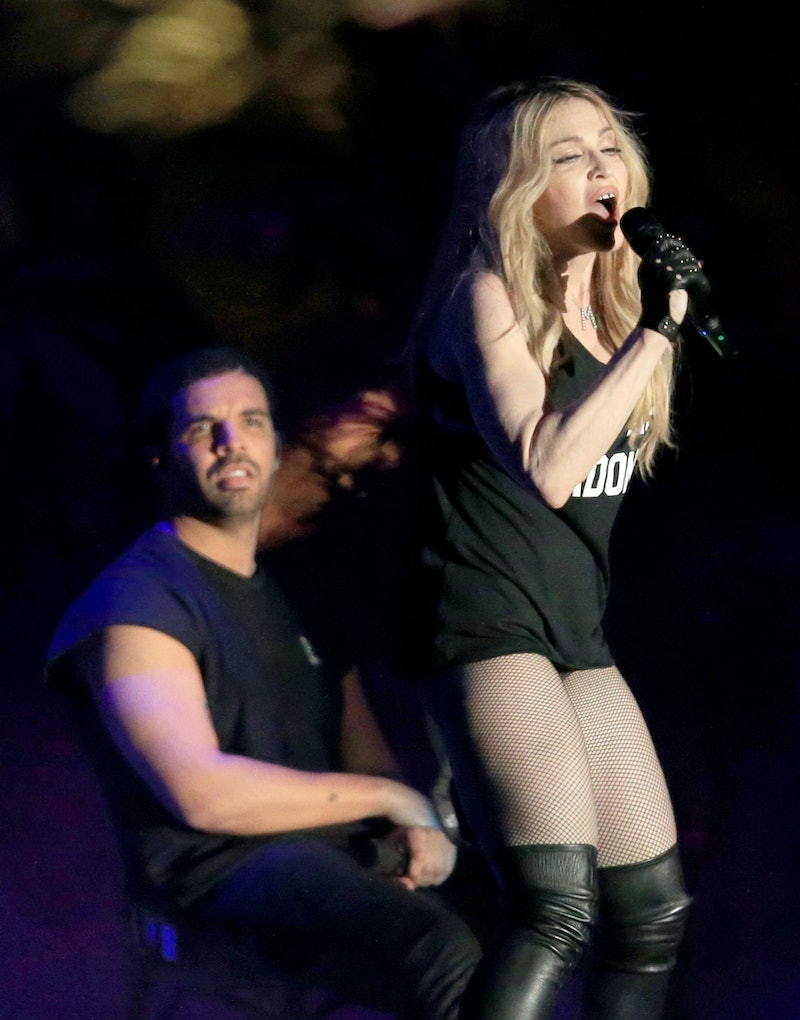 Even if you weren't at Coachella this weekend, you probably already know one big thing that happened: Madonna kissed Drake when she showed up as the surprise guest during his set on Sunday night. Although the move was probably planned, it did look like the kiss wasn't exactly welcomed by Drake... or that he particularly enjoyed himself during it. My gut tells me that his disgusted expression after the kiss was over was also orchestrated, but it inevitably led to a lot of criticism on Twitter. A lot of people's first reactions were ageist — Madonna's, like, a million, so it's totally crazy she kissed this young and vital rap star, right? That's the gist of how many people felt after watching the so-called surprise kiss.

But the reactions weren't all negative, and honestly, a lot of people were jealous. In fact, both sides of the kiss prompted plenty of envy — whether fans were upset that they weren't kissed by Madonna, or if it was Drake they'd rather be kissing. Being that Madonna is obviously a living legend and anyone with eyes can tell you that Drake is an incredibly good looking dude, I myself am not 100 percent certain who I'd be more jealous of.

It's true. At this point in her life, Madonna has now officially kissed Drake, Christina Aguilera, and Britney Spears, which is a ridiculously impressive make-out resume. What are the chances Drake absorbed the powers of the two most influential women in early '00s pop via Madonna's mouth on that Coachella stage? His next album may be his best yet.

Either way, I think we all learned a very valuable lesson here today. Do not ever skip Coachella, because you will miss something epic, guaranteed. The FOMO is real today, y'all.

More like this
What Is Ariana Grande's Net Worth? When It Comes To Money, She Has No “Problem”
By Hugh McIntyre
Beyoncé Might Be Plotting Secret Intimate Gigs In The UK
By El Hunt
Kanye Joked About His Divorce To Kim K In A Surprise Speech At The BET Awards
By Alyssa Lapid
Lily Allen Was “Quite Emosh” After Performing Sober At Glastonbury Festival
By Stephanie Topacio Long
Get Even More From Bustle — Sign Up For The Newsletter