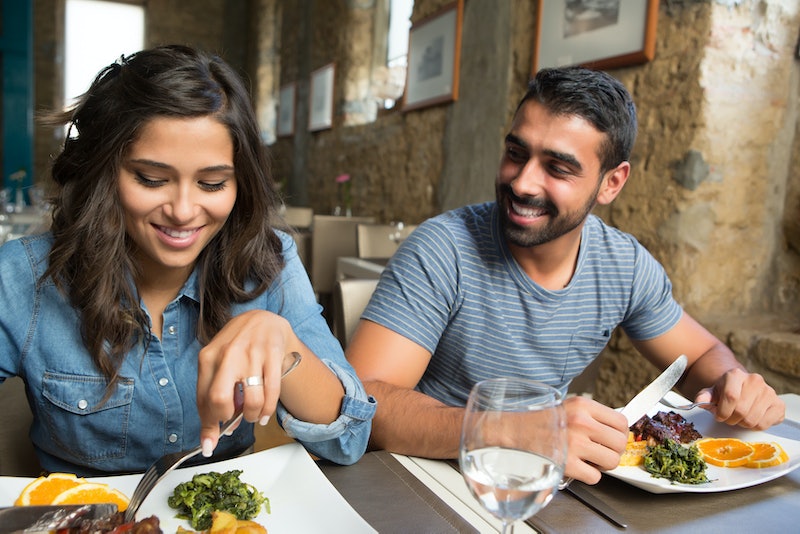 According to a new survey, what you order on a first date may make it or break it for you because people are judgmental AF. You may think that ordering that salad is going to make you look like quite the catch, but it’s actually quite opposite. Instead, guys from the survey want you to dig into those ribs, get barbecue sauce all over your face, and have a beer. Go big or go home.

The survey of over 2,000 adults funded by TGI Friday’s found some very interesting tidbits when it comes to the first big dinner date. For starters, what you order is instantly being judged and women put far more importance on manners than men do ― but are we really surprised by the latter? According to the study, if a guy orders a salad he’s immediately tossed into the “wimp” category, nine percent of guys are turned on by a woman who goes for the messy food, but no matter what she or he orders, women do want the guy to pick up the bill at the end of the night. And with that gender pay gap, why shouldn’t they? At least that’s my thinking.

So what else did the study find about dining on the first date, other than the obvious fact that it’s always a good way to bond? Here’s what women want versus what men want on dinner date.

When it comes to eating out, 56 percent of women prefer a man who has some manners. Although it doesn’t say just how old school she wants those manners (like him standing up every time she leaves the table for the bathroom), she probably at least wants him to know that the napkin goes on his lap and his elbows stay off the table.

According to the study, 42 percent of women want to be asked lots of questions. I mean, how else are they supposed to get to know each other, if not by bombarding each other with inquiries?

3. Almost A Third Of Women Want A Man To Be Into His Food

With one in 10 of women thinking a man who orders a salad is a “wimp” or “boring,” it makes sense that 27 percent would want a guy who’s really into his meal... and ketchup.

4. Not All Women Want A Man To Pick Up The Bill

While women still don’t make as much as men, only 26 percent of women want the guy to pay the whole bill. This isn’t to suggest they won’t make a motion for their wallet, but they really want you to do what’s right and give us a free meal, dammit!

5. 17 Percent Of Women Aren’t Above Getting Tipsy On A Date

While no one wants to get rip-roaring drunk on a first date, it’s nice to see that almost 20 percent of ladies out there are happy to get a wee bit tipsy. At leased it takes the edge off from asking all those questions.

Although the majority of women felt that manners were extremely important, only 12 percent of men could say the same. What I take this to mean is that go ahead and burp after you down that beer; he might even try to out-burp you.

2. Men Want A Woman With Some Charm

For 12 percent of men, a woman who shares some banter with the wait staff is absolutely endearing. It shows just how much of a charmer you really are.

3. Almost A Quarter Of Men Want To Be Tipsy

While more women are more likely to keep their wits about them by choosing sobriety, 24 percent of guys are happy to get a little bit drunk on a date… which is a lovely match for the 17 percent of women who are all for that, too.

4. Men Want Women To Eat On A Date

One in 10 men are turned on by a woman who eats some messy food like burgers or ribs, and 26 percent want you to get in there and enjoy that meal. Go nuts, get it on your face — whether it's a burger or a salad.

5. Men Aren’t As Chatty As Women

Although 42 of women want a nice healthy back and forth of questions, only 31 percent of men could get on that chatty train. For them, it’s more about chowing down, and who can blame them?